Interview: Thi Bui’s The Best We Could Do Tells an Often Unseen Story of Family and South Vietnam 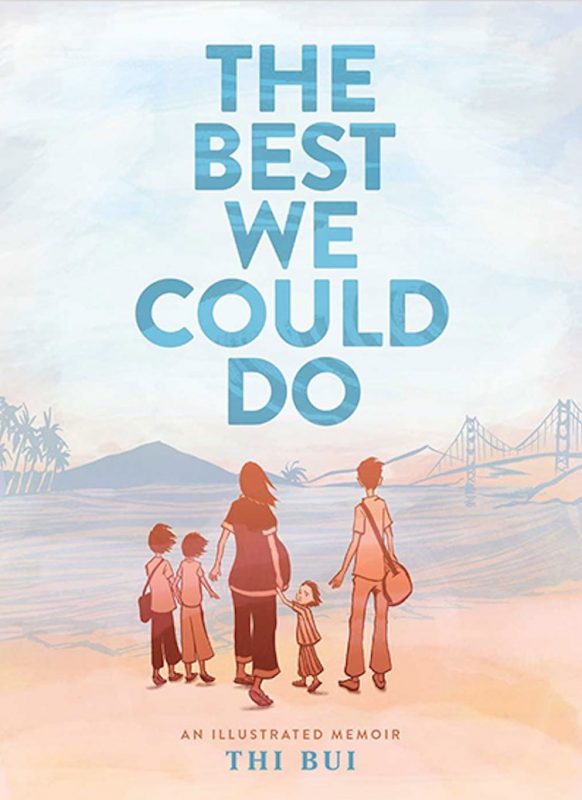 Thi Bui’s The Best We Could Do is a book that you read in one intense sitting and take days to fully process. It’s a graphic memoir about Bui’s family’s escape after the fall of South Vietnam in the 1970s, and the life they build after that violence displacement. It’s also about Bui’s experience with motherhood, how narratives of nation are formed, and how that history informs who we become. The story, both deeply personal and historically illuminating, will devastate and inspire you on many levels. You can read the first few pages over at Abrams Books.

I had a chance to talk to Bui on the phone about her book, and how it evolved over time. At a time when when anti-refugee and anti-immigrant sentiment is extremely high, The Best We Could Do is an especially powerful read that I would recommend anyone. After reading Bui’s book, I felt like I saw a perspective of war in Vietnam that had been missing from much of my education.

TMS (Charline): In the introduction you say a lot of the ideas first came to you around 2002 and it took a few different forms. I’m curious about what ultimately made you decide that a graphic memoir was the best way to tell the story.

Thi Bui: Well, it started as an oral history and I wasn’t really satisfied with the presentation of the oral history. I felt like it could be a lot more personal, and because I drew and I wrote I thought maybe I could do comics, which turned out to be a very arrogant idea. It took me like a good 10 years to really figure out how to do comics. But I was inspired by some of the big graphic memoirs like Maus by Art Spiegelman and Persepolis by Marjane Satrapi. Those book are such great examples of how the personal and the political and the historical can all get woven into a story. And then, I didn’t really want to write a memoir, the oral history needed a protagonist to lead you through the story and I had to volunteer myself.

TMS: It’s interesting, I was actually just describing the book to a friend and I said it reminded me of Persepolis in the way it combines political history with a very personal story. It begins and really ends with you reflecting on motherhood. Tell me about why you made that decision.

Bui: I grew up with my parent’s stories and I started compiling then when I was in my 20s, but I sat on the material for a long time and it felt like it was too big of a subject. It wasn’t until I actually became a parent that I felt like I could actually handle the material. And I think it was just an empathy shift, you know?

I was no longer thinking of myself just as the child in a relationship with my parents, I was now a parent and that was a terrifying thing, to suddenly realize I’m supposed to have answers now for my kids and how do you do that? And, boy, how do you screw up at being a parent? So I guess that train of thought led me to be more empathetic in the questions that I would ask my parents, so I think I got a lot more out of their memories that way–because I wasn’t asking as their kid, but as someone who could imagine being in their shoes. 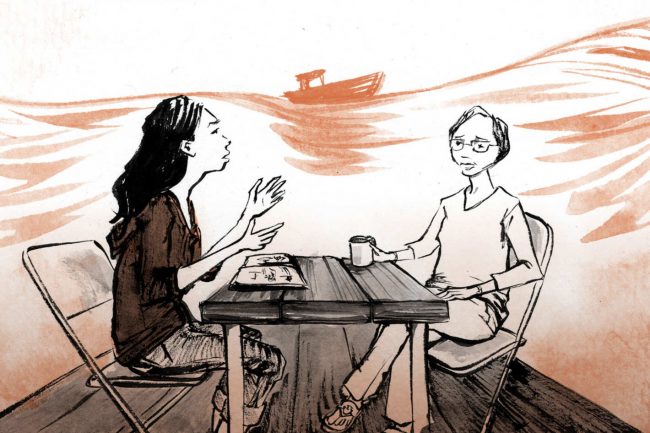 TMS: I imagine you felt a lot of responsibility in telling their stories, did you have your parents working with you as you were making the book and how did they react to it?

Bui: I was really afraid of showing my dad Chapter 3, the early version of it. I didn’t mean to show him because I was still a little nervous about how he would take it and then I think he read it when I wasn’t home. And then I didn’t see him for the next two weeks. He didn’t talk to me for two weeks. I don’t know if it was on purpose, but I didn’t see him and when he came back I’m guessing he probably went through what he needed to go through and then he said, “Ok, it’s fair. I just think you need to change a couple of thing because I don’t remember it the same way.”

So it was good, it was a process. There was a lot of going back and forth and I would show them rough drafts. It would help them remember more things, or I would realize while drawing that I didn’t know enough to draw a certain place so it was a great way to have quality time with my parents, actually.

TMS: You mentioned a few influences earlier, were those influences in terms of narrative but also style influences. I thought some of the art felt very evocative of traditional brush painting, but I don’t know if that was intentional.

Bui: I had a drawing teacher in college named Jane Rosen and she was very influential in teaching me how to draw. Her influence is mainly in European Renaissance masters but then also a bit of Hokusai and Hiroshige. And then I looked at a lot of people in comics who are just masters of the brush like Paul Pope, I guess a lot of European people. But I really am just not very discriminatory with where I like to look, so whatever catches my eye becomes an influence.

TMS: Why did you choose that kind of rusty, orange color as the dominant tone to the story?

Bui: I knew that I wanted it to be a brown book. I tried out blue, but I felt like there’s a certain kind of blue that just reads as graphic novel blue. Also, it didn’t work with the way the story felt with me so I tried a few different shades of brown and I finally found just the right shade–I guess brick. It’s warm, it’s a bit old, and dusty.

TMS: It’s a personal story, but it’s also about history and the way that different nations will paint different narratives of the same event. Do you feel like your book is bringing something to the dominant narratives that’s been missing?

Bui: Yeah, that was the intention. When I wrote it as an oral history all the academic writing in the front had all of that in it, but I felt like the challenge for me, turning it into a personal narrative, was to never say words like “dominant narrative” or even “trauma.” I wanted those word to come out in the reader and not in my storytelling.

TMS: I was looking at some of the reviews, and Viet Thanh Nguyen (author of The Sympathizer) who had a lot of praise for the book was recently talking about how the United States has a bit of historical amnesia and we don’t really think about how Vietnamese refugees and immigrants were thought of as really dangerous in the 70s. Do you feel like there’s a timeliness to your book?

Bui: I started the book in the Bush years, so I guess I was doing some protesting back then. But I worked on the book during mostly peaceful years, I mean, peaceful for a liberal. And then I wrapped up the book and then the election happened and I have a distant relationship to the book now too.

I mean, I definitely think it helps to have a very clear sense of our history so that I can say, “No that’s not actually how it was” to people who see history through rose-colored glasses and think that the nationalism and xenophobia now is any different than it was pretty much any time there was a wave of refugees. So I can remind people, “No, they didn’t want us either.” I mean, our own governor Jerry Brown is so welcoming now to refugees, he’s amazing–he didn’t want us in 1975 when he was in his first term as governor. He changed, so I’m hoping people will change. We just maybe need them to change a little bit faster.

TMS: How do you want people to respond to your book? Obviously someone with some background on Vietnam and this time would probably respond differently from someone who has no idea about this history.

Bui: I made it from a place of love and openness and empathy and so I hope that comes across. I didn’t make it from a place of antagonism or fighting any particular ideology, so I hope it’ll break across the partisanship that’s in a lot of political discourse now. I hope they’ll connect with the characters and realize they’re just human like anybody else.

TMS: How have responses been so far?

Bui: Really good, I’ve been really amazed. It’s really telling for me to read people’s reviews because it’s so much about empathy that it helps me see where people are at also with their ability to empathize with the other. Also, I guess, their ability to have a personal connection to histories that are maybe very different from their own. It’s something that takes time so I’m not expecting everyone to love it but I do know that there are a lot of people ready for it.

TMS: I also saw on Abrams book’s website there’s a handy pronunciation page. Is that your voice?

Bui: No, that’s my mother’s voice! I sat her down in front of the computer and opened up Garage Band and gave her a list of words to say.

TMS: Are there any effort to take this book to Asia?

Bui: Yeah, I’m hoping to get it translated into Vietnamese.