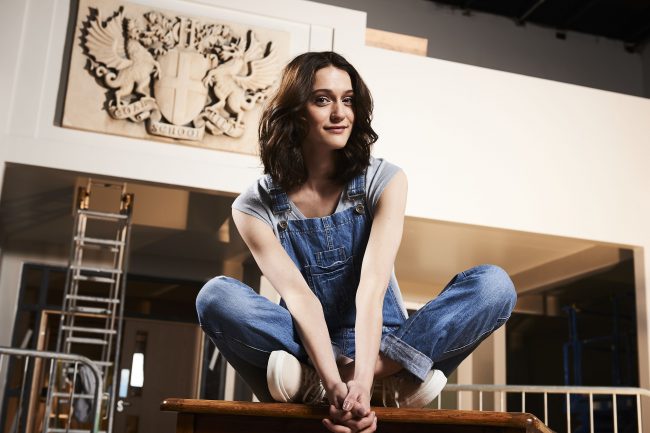 I’m sure there are plenty of Captain Morgans and Jack Sparrows who’ve already watched all of the Doctor Who spin-off, Class, as it was broadcast in Britain. However, it didn’t officially drop in the States until last week, after the Doctor Who premiere, and it was extraordinary! While geared toward a YA audience, there’s nothing immature or frivolous about Class. Holding it all together is the character of April MacLean, the girl who is literally the heart of the show.

Class tells the story of a teacher and students at Coal Hill Academy, the place where the first Doctor’s granddaughter went to school, where he picked up his first companions Ian and Barbara, and more recently where Clara Oswald taught. A teacher, Ms. Quill (Katherine Kelly), and a student, Charlie (Greg Austin), are actually aliens in human form who are hiding out on Earth, and considering the school’s history…wackiness ensues pretty quickly. Check out the trailer:

April is a student at Coal Hill, and while she’s a bit socially awkward, she’s also compassionate, kind, and when push comes to shove, extraordinarily brave. If you’ve seen the first episode of Class, you know just how brave. Bringing April to life is actress Sophie Hopkins, with whom I had the pleasure of speaking.

Before anything else, I wanted to know if Hopkins had been a Doctor Who fan before taking on the role of April, and she definitely had. She’s been a fan since the 2005 reboot, starring Christopher Eccleston as the Doctor. Though she’s dipped in and out of the show over the years, she always watches the Christmas specials, and she does have a favorite Doctor…

“I’ve found it really difficult to choose between Tennant and Smith,” Hopkins says. “But I think because of the fish fingers and custard episode, I just found Matt Smith so endearing as the Doctor. So, that kind of wins for me.”

Even though she was already into Who, that’s not what brought her out to audition. The cast didn’t know originally when they auditioned that Class was a Doctor Who spin-off. “They said it’s going to be a show that they’re going to try to brand as the British Buffy,” she says. “And for me, Buffy was my show. Buffy was my jam. So, I was like ‘Yup. I’m on.'”

The other element of the role that appealed to Hopkins was bringing a potential role model to life.

“[April]’s a real role model for younger girls, so that’s what made me really interested in portraying her,” she explains. “I wanted to act as something maybe for young girls with self-esteem issues to be able to look up to her and be like ‘I see myself!’ That was really important. And we see throughout the series that April kind of achieves that. I’m excited for the U.S. to see it now.”

Hopkins enthuses about the mother/daughter relationship between April and her mother, Jackie (Shannon Murray), who is in a wheelchair. “She doesn’t have a lot of that teenage attitude that you’d expect with her mum,” she says. “They don’t butt heads. They really just kind of understand each other more than just like a mother/daughter relationship. I see a friendship there as well.”

Hopkins is also thrilled that the show portrays disability so respectfully and beautifully. Actress Shannon Murray is in a wheelchair in real life, which makes April’s scenes with her much more authentic than they would be otherwise. And lest you think Jackie is only there to be “inspirational,” Hopkins promises that we will get to know a lot more about Jackie over the course of the first season, and that her story is both beautiful and exciting.

Class is written by YA author, Patrick Ness, and Hopkins has nothing but praise for his ability to write for teenagers, which she considers very important. “[Q]uite often, teenagers are just not listened to and not taken seriously,” Hopkins says. “Which is a crying shame, because teenagers are the future. They’re going to be the ones that are going to be leading the world. And I felt it, I think we all felt it as teenagers, that as soon as you come of age and then your opinions are valid. That no one takes the kids seriously, but they’re the ones saving Earth. I kind of quite like that twist, that the Doctor leaves things in their capable hands.”

Lastly, I asked Hopkins to tell me what she thinks is April’s biggest flaw:

“I think at first, before you know April’s backstory, it’s very easy to see her as being ‘too nice.’ As she says, people mistake ‘nice’ for ‘being fragile.’ That’s probably, on the surface, her downfall. But she’s always compassionate, and she’s always kind, and that will always be there. But the way she handles situations as she gains bravery and she gains knowledge of the people around her and how the world works, rather than being in her own little bubble, I think she starts to fight back, against the things that come through the tear, and she’s fighting for the heart that she and Corakinus share. That is the anchor for her journey. I’m proud of how she comes out at the end.”

And we can’t wait to watch!

Class airs on Saturdays at 10PM ET, right after Doctor Who on BBC America.