We spoke with Saoirse Ronan in advance of her latest film release, Violet & Daisy, co-starring Alexis Bledel and James Gandolfini. We already showed you what her thoughts were on being Joss Whedon’s “prototype” for Scarlet Witch in The Avengers 2 but Violet & Daisy is based in a world without superheroes, though it’s more than meets the eye. The Mary Sue held a special screening of the film for our readers recently, who got to see first hand just what the story about two hitwomen actually entailed. Read what Ronan had to tell us about her experience working on Violet & Daisy, her role, and her tendency toward strong women characters.

[Editor’s Note: Be advised, there are a few spoilers for the film in the interview. We’ve marked them as such as well as covered them with out spoiler tag. Read on with caution]

The Mary Sue: First of all, you’ve taken on a few action roles in your career, specifically lately. Was that something that attracted you to Violet & Daisey? And could you tell me a little bit about how you first got involved with the film?

Saoirse Ronan: The funny thing about it is I’m never attracted to action roles really, I was never kind of, it’s not that I wasn’t attracted, but I just kind of never really thought that I would ever be hired to do anything like that. And Violet & Daisy was actually shot about three years ago so I did that, I think I did it in the same year as Hanna and so I remember before I read it I was quite hesitant about doing something like that again because I never wanted to do the same thing twice or within a five year timeframe. But then I read it and I saw how different it was, and a very, very different story, and how it really…Hanna versus Daisy, they have very different source of killer instinct. [SPOILER] Daisy has none basically, and doesn’t want to be a killer and doesn’t want to hurt anyone and loves puppy dogs. And so I just like the idea of being involved with someone that was so kind of zany as well. It’s so out there.

TMS: Can you talk to me a little bit about your character progression as Daisy? Because we’re introduced to her of course one way, with these certain assumptions about her, and then we learn a few secrets along the way that reveal a lot more.

SR: You know when we see her at first she’s a hit girl and her and her best friend are hired to kill people. But they’re teenage girls, they’re young women really, and they see this dress that they want to get. It’s all so innocent, the reasoning behind it, something about it is so innocent and childish in a way but that’s what’s so great about it. And so basically they live in this world that they’ve created for themselves, this kind of fairy tale, bubble of a world that they have. And then she just happens to form this relationship with this guy that she’s supposed to kill, and he asks her questions about her life, and where she’s come from, and where she wants to go to, and makes her realize [SPOILER] that this isn’t really the life that she wants at all. And as much as she loves her best friend, she isn’t necessarily the right person to have in her life. She just really grows up. It’s just a kind of very drastic, rapid growth for her within a couple of days and so it’s quite heartbreaking then at the end. But lovely is the last scene that Violet and Daisy have together, where they say goodbye but it’s kind of their farewell in a way, they’re gonna go down different paths. So yeah, I could see that in the script and we really shot exactly what we had read beforehand and it was nice to see how, hopefully, that would come in for Daisy.

TMS: Can you tell me a little bit about your experience shooting? Basically, it was a very small cast between you, and Alexis, and James, what was the dynamic on set like?

SR: It was lovely! I think because it was only the three of us the majority of the time, we were all close and comfortable with one another and Alexis and I, in particular, had a lot of scenes together. So we did become friends and it was just nice having someone like that, someone you were so comfortable with. And James was great because he came up about three weeks into shooting and we hadn’t met him at all until we started shooting our first day with him. I mean, it wonderful, he was very protective over me and really kind of took care of me and made sure I was all right. And that was really lovely. So I had such a good relationship with both of them.

TMS: You’ve taken on some really strong female roles in your time, of course Hanna, Daisy, the character you’re going to play in Byzantium, is that something you strive for in your career and was there ever a role that you decided not to take because of how the character was represented?

SR: Yes. Yes, there’s been a few times where, I’ve just…I’ve read a few good things and I just think, there’s nothing to them. They’re just the girl next door or I don’t know…I just didn’t find anything that interesting with them because there was nothing really to them. It’s very much about the character, it’s not even a sort of feminist thing or anything like that where I’m like, “Yeah, I want to play strong women,” but strong characters, and they could be a weak person but a very kind of a strong role to play, is what I’m drawn to. Somebody who usually has a lot to them. I mean, I don’t want to define it in kind of any character that I’d be looking out for but yeah certainly somebody who just…I always like when they have a little bit of mystery to them, I always find that quite interesting. But yeah, I guess I’m drawn to that a little bit. 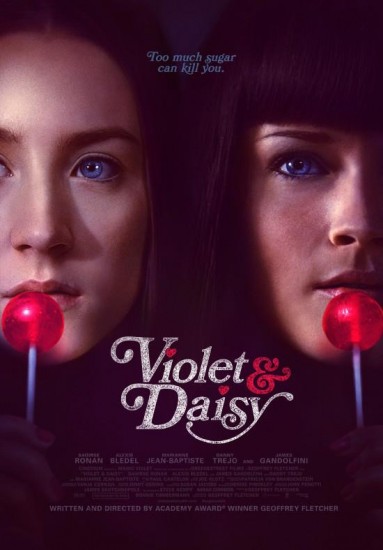 Violet & Daisy is in theaters today.