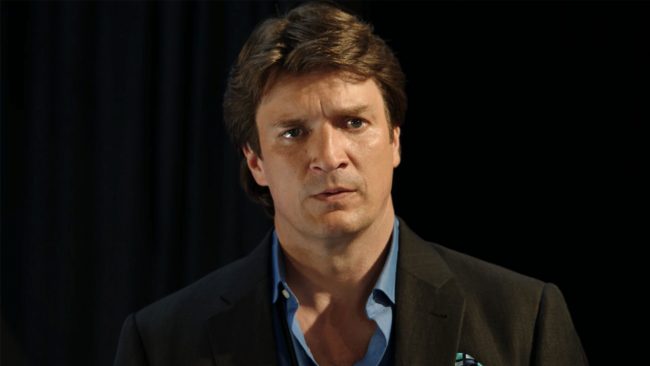 Con Man centers on an actor named Wray Nerely (Alan Tudyk) who finds himself pigeonholed after starring in the fictional sci-fi series Spectrum and not seeing much success afterward. The show also stars Nathan Fillion and features a number of guest stars including Eliza Dushku, Felicia Day, Mindy Kaling, Casper Van Dien, Amy Acker, Henry Rollins, Leslie Jordon and Lou Ferrigno. With the second season wrapping up, I spoke to Tudyk and Fillion about that special musical episode, as well as politics’ place in entertainment and what they’re excited to be working on next.

The Mary Sue: Wray Nerely has this moment in the finale where he finally tells everyone how he truly feels–that he doesn’t want to do the Spectrum movie. Have you ever felt that way about a project in your own lives?

Nathan Fillion: That’s how he’s felt, and he’s kept it bottled up and not [told] anybody how he’s felt about not wanting to go back to the thing that pigeonholed him and kind of ruined his career in his mind…but gave him so much stardom in the minds of the fans. He’s much loved because of this old show, but he doesn’t wanna go back. He never shared this with anybody, and then he explodes publicly. And then, in typical Wray fashion, he didn’t have to have that explosion. He didn’t have to bite the hand that fed him all those years. It’s really wonderful watching Wray suffer. I think that’s one of the strengths of the show. We can see Wray nearly ruining it for himself so it’s very satisfying.

Alan Tudyk: I, personally, have never had a moment where I’m like “I don’t want to do this!” That’s why it’s fun to do.

NF: There’s a lot of truth in what’s going on in Con Man. Everything is born from a seed of truth, but in order to make this entertaining, we have to have Wray step on his own feet, slam his own finger in the door… kicking himself in the nuts. We have to keep it a little off-center from what we’ve actually experienced in real life. But I think it’s born of a kernel of truth.

TMS: Any inspiration from the speculation of a Firefly movie? 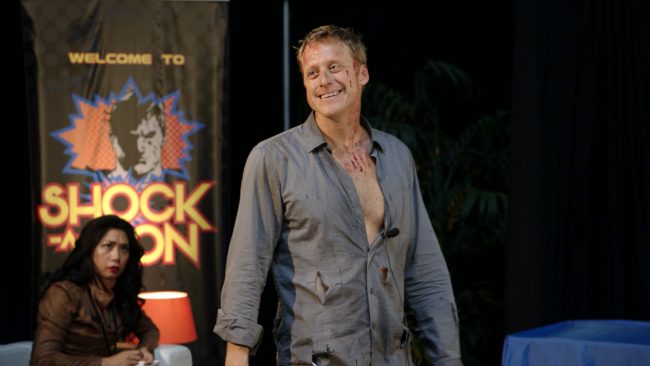 TMS: Let’s talk about that musical episode with Lou Ferrigno. Who chose Of Mice and Men and why?

NF: I met Lou at cons and he suggested he and I do Of Mice and Men as a play and I thought that was a great idea. I was writing Con Man at the time and wasn’t able to do it the first season. And when Comic-Con HQ picked us up for a second season, it was on the top of my list of things to write. I started writing and immediately thought it would be funnier as a musical. Jonathan Dinerstein did our music.

Would you do another musical for a potential season 3?

NF: I’d love to figure out how to do a whole series of musicals. Just you go on to, every season, each episode you turn into, you’ve got a cast of people trying to make another…

AT: … Well, they did that and it’s called Glee, which did very very well.

TMS: You have a Spectrum comic book and a Con Man video game. Will we see anything on the big screen involving the Con Man world or Spectrum anytime soon?

AT: That sounds like fun. That would be cool.

TMS: Right now, we’re in a place in entertainment where a lot of people are saying we should separate politics, and others say it’s important to have a message. Where do you stand on that?

NF: I think entertainment has always been political. You can go back years and decades and decades. So you’re always telling the stories of the times. This is what our times are; it’s gonna reflect that. Artists are human people, and… they’re artists. You’re expressing your own personal experience in the world. Times have changed. You’re gonna see artists make art that reflects their world. I’ve always been confused, personally, by people saying “You’re just an artist. Shut up!” You’re an American. I don’t know why, if you’re an American [and] you pay for the taxes and have an opinion, why your opinion matters less than somebody else… Artists make the art they make. They’re inspired by what they’re inspired by. There’s some great, great music from the ’70s you may have heard in response to the Vietnam War, which are still today amazing. Father John Misty has a song out that’s called “Pure Comedy” which I recommend, and it’s just sort of talking about human condition. It’s not specifically political, but human condition is political.

TMS: What current projects are you excited about and what can people expect?

NF: I have a little bit left to do on Modern Family. I’m a huge fan of Modern Family, and I know there are other fans out there. I didn’t know how many people I knew that watch that show. I’ve become famous amongst my friends, which has never happened to me before.

AT: I’m still trying to find you.

NF: I’m, right now, as famous as I’ve ever been to my friends–which is just a little bit famous.

AT: I’m impressed. I would like an autograph at the end of the day.

AT: I’m gonna be on Powerless, which is on NBC. It comes out on the 2nd of February. It takes place in DC universe so there’s some superheroes but it’s a comedy. It’s the first DC comedy they’ve ever made. Vanessa Hudgens is our leading lady and it takes place in an office in a made up city of Charm City. Superheroes are all around us and we’re just living in their world. Really funny and people seem to like it. I’m anxious for more people to see it.

TMS: Have you heard anything about a Con Man season 3?

NF: We’re gonna know very very soon. At this point, there’s no reason not to do a season 3.

Season 1 and 2 of Con Man are now available on Comic-Con HQ. If you sign up now, you can binge shows on the network for free for the first seven days. After that, it’s $5 per month or $50 for an annual pass.