The Mary Sue Interview: Sydney Padua on The Thrilling Adventures of Lovelace and Babbage 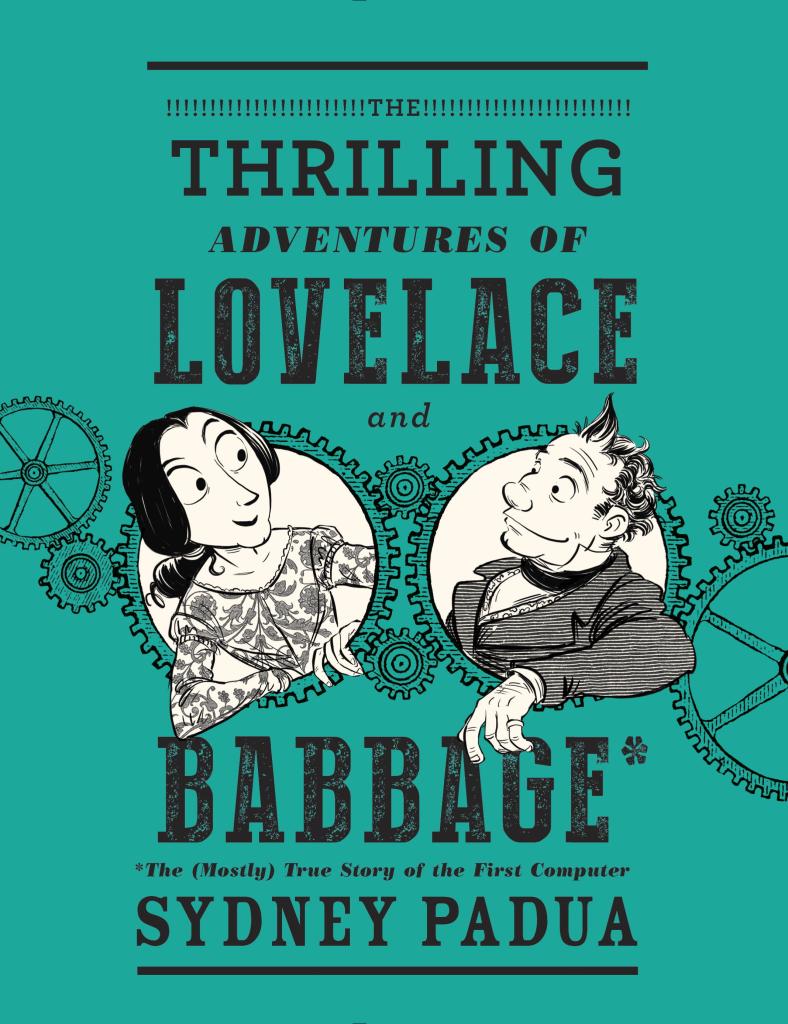 The Thrilling Adventures of Lovelace and Babbage: The (Mostly) True Story of the First Computer by Sydney Padua combines Ada Lovelace, Charles Babbage, a steampunk sensibility, and copious footnotes – so it is no surprise that I was immediately transfixed as soon as I discovered the web comic and app several years ago. Since that time, Padua has not only continued to create new drawings and comics of Lovelace and Babbage fighting crime in the “pocket universe” she has created for them, but has also collected a number of these stories into a new hardcover edition of the comic, released today. I was fortunate enough to be able to speak with her about the comic and this new book. 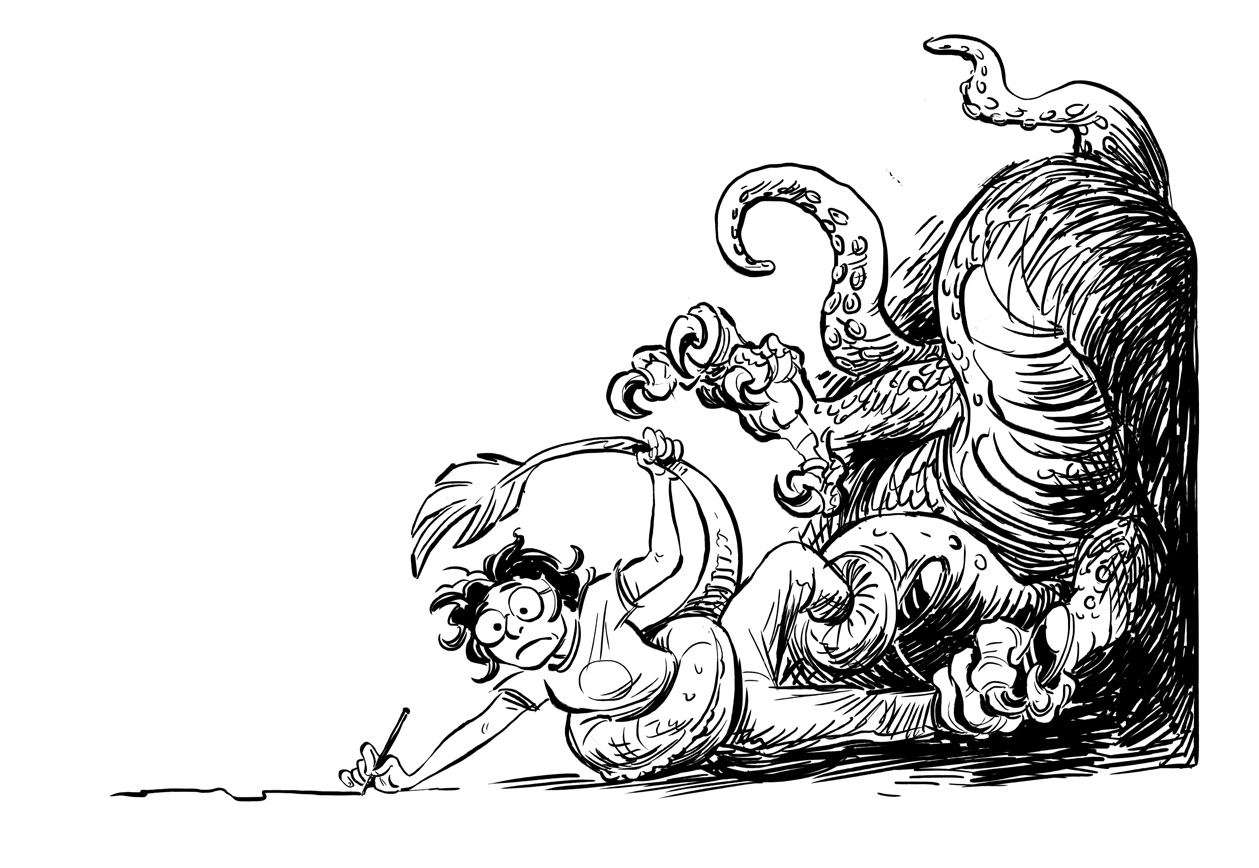 As Padua notes in the Introduction to the book, she started a brief comic about Charles Babbage and Ada Lovelace in 2009 at the suggestion of a friend. However, Padua admitted that at that point, she had only “heard of them very vaguely. I mean as much as, you know, as much as any other historical figure. I think I was aware of a Victorian computer but that was as far as I’d gotten.”

Once she got started though, she dove into the research process, which was made easier by the fact that the Google Books project had just launched:

Research-wise, I mostly started out looking for gags. I think I kind of looked over some of the secondary sources and they just didn’t really come to life. […] I don’t think that they really sold me on who these people were, so I started kind of rummaging around trying to find their own words and kind of contemporary stuff about them.

I guess I was really lucky that the start of the comic coincided with this real gigantic dump of information from the Google Books project, which I think happened at almost exactly the same time I was starting the comic, and so Google Books was dumping this enormous treasure trove of 19th century – just this completely undifferentiated but searchable mass of 19th century ephemera.

You could type in ‘Babbage’ or ‘Lovelace’ into the search box and you would get this amazing stuff and they instantly became real people, because they were quite famous, so there were a lot of anecdotes about them from people who knew them – you know, contemporaries – and it was just magical. I mean, it is a very very different thing than reading a secondary source or a summary in a history book. […] It was like it was happening then, and they were people who were still alive.”

Though she started her process with online research, it also led her to delve into the collections of libraries and archives as well, including touring the British Library where she “spent some days kind of browsing around in stuff they had there.” As the comic grew, she also found that she “got sent a lot of stuff […] from scholars, because people would come across stuff and send it along”.

The research paid off and was a crucial part of the final comic, which has footnotes and endnotes peppered throughout. The book also includes an appendix featuring some of the key primary documents that Padua found through her research. As she said, “the research definitely drives the plots. The comics are an excuse for me to post a really cool document nine times out of ten.” She found that it really changed her perception of both Lovelace and Babbage as well:

Babbage was hugely famous. Everybody knew who he was and that he had invented this genius machine and was this great genius and he was also, you know, a popular guy. Very sociable. Very outgoing. And this was just this radical contrast with this summary that you get of Babbage.

And then Lovelace, who tends to be always accompanied by this same portrait looking very augustine and on a pedestal science woman… to contemporaries she was this sort of dangerous person who was very unpredictable and eccentric […] They kind of step off their pedestals and become these very human people when you kind of look at them through the eyes of the people who lived with them.

Though the historical piece of the story is key, Padua’s art is what really brings the world to life. Though this was her first serious foray into creating a comic, though she had read them in the past, and was influenced by classic comics like Asterix, Tintin, and Milt Caniff’s black and white adventure comics. This gives her comics an “old fashioned” look that works well with the steampunk aesthetic that is incorporated throughout the comic. That aesthetic itself started out as a “joke” in the first comic Padua created with the characters, though she “had certainly worked on movies that had that sort of look to [them] before” in her career as an animator. And, this is just one small way that her day job influenced the comic.

First and foremost, her experience as an artist and an animator made her better able to convey the story effectively. As she noted, “I’ve drawn professionally for a very long time so I have a big tool box in terms of drawing, so I can do things quite quickly and efficiently maybe. I’m used to expressing myself in drawing and using drawing to tell stories, so much more than using words, so drawing is just my natural way to express myself.” 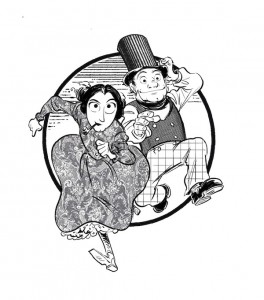 Beyond this, she notes that the Difference Engine itself “is very much about my experience learning how to animate on a computer… you know, this very alien environment. Computer animation software is really complicated and is this endless maze of confusion and I think, you know, the Difference Engine is almost my caricature of computer animation software.” Later in the interview, when I asked her about whether she had any experience with computer science prior to this project, she expanded on this saying:

I knew as much about computing as it was painfully necessary to know as a visual effects artist. VFX is not very user friendly, and it is getting less so as stuff gets more technical, so I kind of had to learn very resentfully, I have to say initially. I’ve got a bit of a love/hate relationship with computers. I think they are fascinating, but I also think they are super annoying, so I think that gives the comic its certain sort of flavor. If you look carefully at the Origin, Lovelace and Babbage were originally super villains in the final panel, because they created this horrible thing, the computer.

While she told me that Wellington’s horse is her favorite character to draw, when asked who her favorite overall character was, Padua said that “I don’t think you can draw a comic starring a dynamic duo and prefer one to the other. I think they both serve […] a purpose. To be honest, I love Babbage. I just love him to pieces, but I also love Ada. Yeah no, I love them all. I only draw what I love.”

And, she isn’t necessarily done with these characters either. As we concluded the interview, Padua said “I would love to write more stories. I have so many more stories I would love to do and I’ve got notebooks full of gags and I keep meaning to start something on the blog but I don’t want to let people down by starting something and then not being able to finish it. The book took a ton out of me […] it was very exhausting doing the book, and also my day job is super exhausting, and I just don’t have time. I would love to do a whole other volume of Lovelace and Babbage stories. I just have to get back in the right playful mindframe.”

Carli Spina is a librarian and in her spare times writes frequently abouttechnology, graphic novels, young adult literature, and other pop culture topics. You can find her on Twitter as @CarliSpina.