Interview: Lantern City to Bring Steampunk and Female Empowerment to Comics and Television

Lantern City is about love. 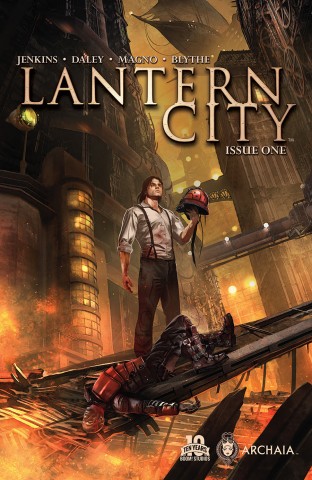 Lantern City is a new multimedia steampunk property, created by Trevor Crafts and co-created by Matthew Daley and Bruce Boxleitner. Originally developed as a television show, it switched mediums to comic form with Boom! Studios. Set on another world, Hetra, the story takes place a hundred years after the Gray Empire has built a wall around the city which has allowed a totalitarian regime to thrive and a rebellion to rise.

Trevor Crafts, CEO of Macrocosm, first imagined the idea while flying from New York to L.A. “How far would someone go to be with the person that they love the most? That was the super kernel of Lantern City,” Crafts told me. From there, things slowly progressed as Crafts teamed up with Daley and Boxleitner to bring the idea to life.

“We soon found out we had more material then for a television series,” Daley added.

They partnered with Boom! Studios to release what was initially a twelve issue run. The duo met artist Carlos Magna, known for Planet of the Apes comics, at a convention, and from the very beginning, he was enthusiastic and joined in quickly. Because the project was originally conceived for television, some of the characters are modeled after their real life counterparts when the television series goes forward. The cast include Raphael Sbarge (Once Upon a Time) and Mira Furlan (Lost, Babylon Five).

The comic features Sander Jorve, who gets thrust into a rebellion, after his brother in law, Kendall Kornick kills a guard and convinces Sander to take his place. It focuses on class systems and the oppression of the societal hierarchs that Killian Grey of the Grey Empire lords over. Sander goes along with Kendall’s plan reluctantly, because he wants to provide hope and a better life for his wife and son.

The first arc concluded with issue four and the trade paperback compiling that will be available on March 8, 2016. Crafts gravitated towards the steampunk genre and style after seeing steampunk cosplay at conventions and felt it was untapped as a medium. “There isn’t really a media form for people who like steampunk to rally around. We’ve been in the ocean, we’ve been in space a thousand times but this is a world, that no television audience has seen before.” Crafts said.

Daley has also championed female empowerment in the character of Lizel Kornick, Sander’s headstrong niece, who is both adventurous and troublesome and has a passion for the rebellion. Daley plans to expand her character in the next arc as well as possibly transitioning her to the series. “Lizel’s my favorite character in Lantern City. She’s close to my heart. You will see more of her in hopefully every incarnation,” Daley said enthusiastically.

Female empowerment is prevalent in the steampunk genre, particularly in YA circles with authors such as Kathryn Smith and Gail Carriger. It’s slowing breaking through comics too, particularly with Girl Genius by Kaja Foglio.

“There’s a lot of female empowerment in the steampunk genre. That’s something we want to push. A lot of people can make their own stories—creating something of their own imagination.” Crafts added.
Looking to the future, Crafts and Daley plan to continue to expand Lantern City. The comic has been successful and was given the option to continue past the initial twelve issue run. The television series is slowly progressing; they’ve partnered with director Martin Wood (Stargate, Sanctuary, Dark Matter) and currently shopping it to networks and studios

“This is a place where there is fantastic technology that is overshadowed by incredible oppression. That’s very fertile ground for heroes to be born,” Crafts said.

However, conquering every medium is not Crafts’ end goal. “I’ll be happy when there’s Lantern City underoos,” Crafts chuckled.

Lantern City is currently on Issue 5, with Issue six coming out in October.

“I just want to explore every inch of Lantern City and find all the different stories we can tell” Crafts said “I’m excited that there’s so many iterations that I want everyone to have their favorite version of Lantern City,” Daley added.

Ezekiel McAdams is a freelance writer, and just finished his first novel, a YA fantasy fiction. When Ezekiel isn’t writing, he can usually be seen eating pie, gushing about Mars or cows, and being an obscure geek in all things Zak McKracken, Earthworm Jim, Bucky O’Hare, Sliders, and Over the Garden Wall. Ezekiel can be reached on Twitter @PocketFullOFish.