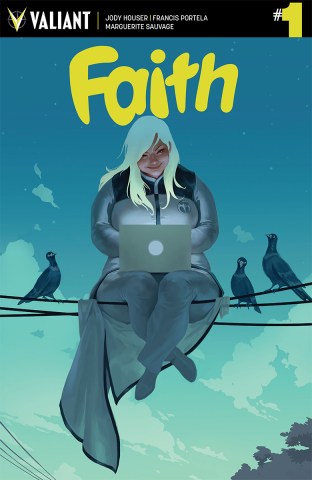 Cover A by JELENA KEVIC-DJURDJEVIC

Female superheroes are something that we always celebrate here at The Mary Sue. Moreso when they’re being written by awesome female comics creators. But to have that female superhero who’s written by a woman also be plus-size? It’s like I died and went to Geek Heaven. Thanks to Valiant Comics, however, I can stay very much alive while still getting to enjoy all of that in their upcoming  four-part mini-series called Faith, written by Jody Houser, with art by Francis Portela and Marguerite Sauvage! 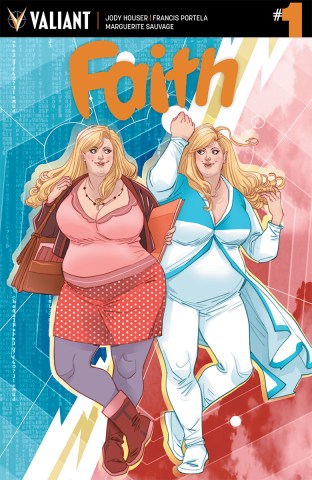 Cover B by MARGUERITE SAUVAGE

Here’s the official solicit information from Valiant Comics about Faith #1:

FAITH BEGINS! VALIANT’S MOST DEMANDED HERO STEPS OUT OF HARBINGER…AND INTO AN ALL-NEW ADVENTURE!
Orphaned at a young age, Faith Herbert – a psionically gifted “psiot” discovered by the Harbinger Foundation – has always aspired to greatness. But now this once ordinary teenager is taking control of her destiny and becoming the hard-hitting hero she’s always known she can be – complete with a mild-mannered secret identity, unsuspecting colleagues, and a day job as a reporter that routinely throws into her harms way! Well, at least she thought it would… When she’s not typing up listicles about cat videos, Faith makes a secret transformation to patrol the night as the City of Angels’ own leading superhero – the sky-soaring Zephyr!

But flying solo is going to be tougher than she ever thought when Zephyr uncovers a deep-rooted alien conspiracy. Two-bit burglars and car thieves are one thing, but when the world needs a hero to stave off a full-blown extraterrestrial invasion, will Faith find herself in over her head…or ready for her biggest challenge yet? 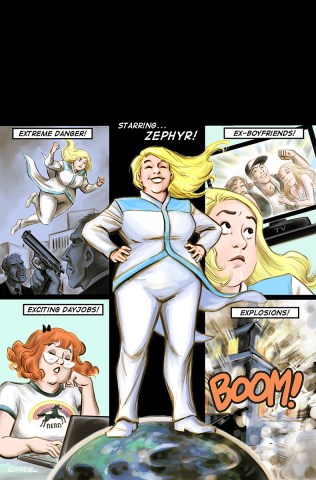 I had the chance to speak with writer Jody Houser about this exciting new title! Here’s what she had to say about what makes Faith/Zephyr so special, representation, and why geek characters are so damn appealing!

Teresa Jusino (TMS): What has Faith’s history at Valiant been?

Jody Houser: Well, one of the first titles at Valiant was Harbinger, and that’s the book that Faith launched out of. And she is a psiot, which means she’s a gifted human, she has the ability to fly and carry people in her companion field. And her powers were actually awakened sort of by accident you could say, and she ended up joining this group of kids called the Renegades, who are all people with psiot abilities who are trying to take down the organizations who were seeking to control the psiots. And she’s the one person in that group who was super-excited about having superpowers, because she’s a big fan of comics and sci-fi and fantasy, and basically everything that we like. She likes Joss Whedon and Doctor Who and everything good. So, she had a very strong sense of who she wanted to be as a superhero. She’s always dreamed of having powers, and now she actually does. That’s given her very strong direction in her life.

And things have been a little bit at odds for her – the Renegades broke up a bit, and she was with her now ex-boyfriend Torque for a little bit, and they had a falling out. And she joined a team called UNITY, and she went on a mission with them, saw them kill the crap out of a bunch of people, and she was all, “NOPE.” So, as soon as the mission was over, she just got into a taxi and left.

TMS: And so why is she getting a solo title now? What is it about her that made you or Valiant decide to do this now?

Houser: I was actually the one who pitched the Faith book, and for me, it was the fact that she’s at this really interesting point in her life. A) She’s on her own for the first time, which she really hasn’t been since she got her powers, and B) She’s nineteen now, so she’s very much becoming an adult and setting out in that new stage of life. So, those two things converging seemed like a great place to let the character shine and see who she’s going to become.

And I think we all always love the geek characters. Going back to someone like Spider-Man, and more recently, Kamala Khan. They’re the science geeks and the superhero geeks. But I think the thing that sort of makes Faith stand out even from among that fairly small group, is that the comics that we love reading, to her, are also fictional. So there’s that shared fandom. For Ms. Marvel, she’s a fan of the Avengers, but for her, they’re real people. When she writes Avengers fan fic, she’s writing Real Person Fic. Whereas when we write Avengers fan fic, they’re not actually possibly going to read it. [laughs] Just the fact that she’s identifiable in a way that even other geek superhero characters aren’t really drew me to her.

And again, I think she and I like almost all of the same things. She’s one of the few characters I’ve written that I would actually want to be friends with. I love the clones from Orphan Black, but I think if I saw Helena walking down the street, I would probably walk the opposite direction from her just to be safe. 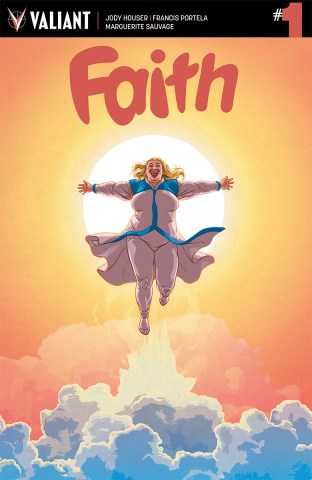 TMS: What can you tell us about how we’re introduced to her in Faith #1?

Houser: Basically, because she has this knowledge of superheroes and genre tropes, she sets out to do the traditional journalism thing, except that journalism isn’t as big a deal as it was in the 40s and 60s when these classic characters were conceived, so she ends up working for an online blog-type site.

[Editor’s Note: If you ever want to work at TMS, Faith, let’s talk! We could use a superhero correspondent!]

She sort of has an idea of how her life will go, and the reality of it doesn’t quite match up to the fiction she’s been experiencing her whole life, so there’s some adjustment there. And she ends up getting caught up in something maybe a little bigger than she planned in terms of Being the Hero. So, she’s not just out there stopping robberies and stuff. Something a lot bigger is going on, and can she handle it on her own? We’ll see!

TMS: One of the things I’m drawn to personally is the fact that Faith is a plus-size superhero. That’s something that, to me, is really important. Is that going to be explored in any way in this series, and how that affects things? Or is it a non-issue? How is that treated in the book?

Houser: Right now, the part of the story that we’re working on, it’s not in the forefront. And I definitely don’t want to ignore it, because it is – like you said – it’s such a big deal to so many people, and it is an important thing that differentiates her from even other female superheroes out there. But at the same time, I don’t want that to be her defining feature. She’s a strong enough character that she stands on her own. So yeah, I don’t want her to be “the plus-size superhero.” I want her to be the superhero who also happens to be plus-size, if that makes sense.

She’s a really good balance of being super-positive and optimistic, but not super-naive at the same time. Because you can have characters who are always cheerful and happy, and it comes across as them being a little out of touch with reality. But she’s a character – and even going back to stereotypical superhero stuff – she’s an orphan. Her parents were killed in an accident when she was young, and that’s actually part of the reason she’s embraced comics and sci-fi – that was a connection she had with her parents. So, it’s not like she’s had this charmed life. It’s just how she chooses to see the world. 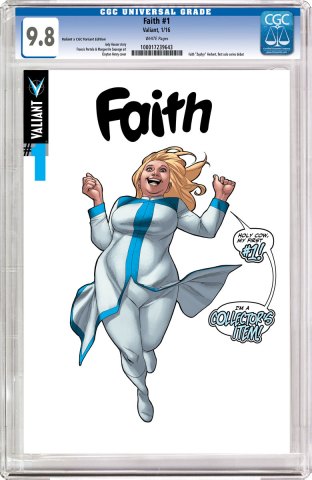 TMS: Now, Faith isn’t a new character, but she’s getting focused on in a new way. To someone who’s unfamiliar with the Valiant Comics universe, what would you say to them to let them know why they should check out and get to know Faith.

Houser: I would say if you want a comic that’s fun, and is dealing with superhero stuff in a bit of a new way…and again, if representation is important to you…and I don’t want to sell the book just on representation, but the fact that that’s what’s drawing some people to the book, I think that’s too important to ignore. And if you’re interested in learning about the Valiant universe, this will be a nice window into it.

TMS: So, will be seeing other Valiant heroes working with her in this book?

Faith #1 comes out January 27th! Will you be adding this one to your pull lists?