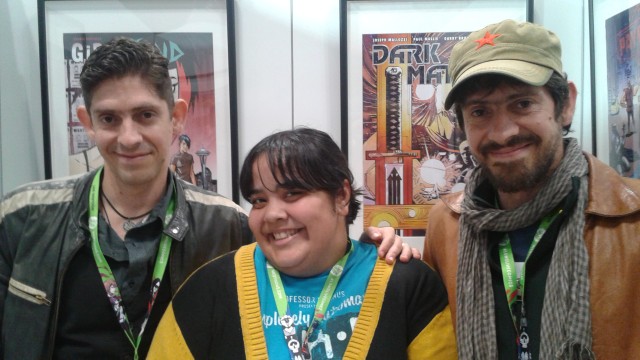 Gabriel Ba and Fabio Moon are two of the most creative artists in comics right now, having given comics fans amazing work individually (Gabriel Ba on Umbrella Academy; Fabio Moon on Casanova) and as a team (the Eisner and Harvey Award-winning Daytripper from Vertigo). At New York Comic Con this year, they were in attendance to promote their latest joint effort: the graphic novel, Two Brothers, from Dark Horse Comics (which I recommended to you in Pull Wisely last week).

I had the chance to speak with Ba and Moon in an exclusive interview for TMS, and we talked about their relationship growing up as twin brothers in Brazil, why they chose an adaptation as their latest project, and why mainstream superheroes aren’t exactly their thing. There’s even a tiny update for Umbrella Academy fans!

Teresa Jusino (TMS): Obviously, the story of Two Brothers is that of twin brothers who are separated, and when they come back to each other, their relationship is not great. Now, you two are twin brothers, you work together a lot – do you ever get sick of each other, or get tired of being twins and seeing each others’ faces?

Gabriel Ba: Well, we have to pick up with each other no matter what, so…it’s just a matter of giving each other time [sometimes]. But we get along very well, we spend a lot of time together, we see each other almost every day. If we didn’t get along very well, that wouldn’t be possible. Even if we have setbacks – for anyone else, it would take months, and a lot of talking, and shrinks to settle [chuckles] – but with us it’s just a matter of breathing a little, taking a walk around the block, and then moving on with life, because this is what we have.

So, it makes everything easier when we work, because we care a lot about what we do, and that’s what really matters, so we don’t have to worry about hurting each other’s feelings or anything like that. And that’s how it’s always been.

TMS: It’s interesting, too, that two brothers became interested in the same line of work. Talk to me a little about that and how you both came into loving comics.

Fabio Moon: It has a lot to do with drawing. We’ve been drawing since we were little kids, and so when you have a twin brother and you like to draw, that’s something you can share with your brother, and that, for us, created this bond in drawing. Because we could do it all day long. We could do it everywhere. We drew on the beach, we drew on the sand, we drew on the walls….we could draw anywhere, so that created this bond. Drawing was like our imaginary friend or something. It was something we could share. So, by the time that kids start to read or start to go play with friends, we just kept drawing.

And we spent so much time together growing up, we had the same interests, we liked the same things, so we really developed this space for telling stories. We discovered comics at the same time, we read the same comics, we read the same books, and we found that we can tell stories with comics. We can create characters. We can draw, and show people our stories. We discovered all these things at the same time, so it just felt natural to do this together. We never thought it was weird, or different, or that it would be a problem to work together. It was just one of many things that we already did together all our lives.

TMS: And so, drawing just came naturally to both of you as a method of self-expression…

Moon: I think so…

TMS: You just liked it!

Ba: Yeah, we just liked it. And I think once we decided to do comics, something changed. It was very clear that we were taking that very seriously. When we decided to do comics, it was something that we knew we were going to do for the rest of our lives. It was very early on – before getting into high school, we knew that we were going to do comics. And it’s very rare for people to know at that point what they want to do with their lives. But that was the direction that we followed and believed in with all our hearts. And we eventually learned how to draw, and learned how to tell stories, because we were so passionate about it.

TMS: Two Brothers is based on a novel [The Brothers, by Brazilian author, Milton Hatoum]. What made you decide to try an adaptation for your next project, rather than another original work?

Ba: Well, we’ve done an adaptation before in Brazil, but it was a short story that we adapted into a 16-page graphic novel. But this time, we got invited to do this book. The idea was from the comic book editor and the publisher of the book – basically out of us being twins, and the story being about twins. Fabio had read the book before, I hadn’t. But after I read it, we both agreed that the story contained everything that we like to tell in our stories, and what we believe can be done in comics, but isn’t done so often.

It deals with relationships, and the choices we make, and the consequences of your choices on the people around you. It just felt like the [kind of] project that we like to tell, and a perfect fit for us. And a huge challenge to achieve, to be able to tell this story in a comic book. It’s the kind of story we like and believe in, but it’s also very different than anything we’ve done before.

TMS: You’ve done a lot of limited series – I’m a huge fan of Daytripper. Are there any plans, or would you like to tackle an ongoing title? Either an original work, or maybe even a superhero and make it your own?

Moon: Maybe not a superhero…. [laughs] Well, we like the narrative possibilities of a longer story. It’s just like working on a graphic novel. You have the space to develop the characters. We like to develop them, go deeper into stories and characters.

Ba: We might one day try doing something longer and explore that monthly, longer, no end in sight type of story. But not right now.

Moon: Not right now. It’s a daunting challenge. And maybe one day, if we find the right story…as long as we can keep breaking the stories into small mini-series. maybe we’ll also keep doing that. Work on Cassanova for some time, then break, and do something else. Work on Umbrella Academy for some time, then take a break. Few [creators] go back to characters and keep developing them, and at the same time we can cool ourselves off from that and try to create something that [isn’t part of] the machine of publishing companies, that explore a different side of comics without the pressure of the monthly story thing.

TMS: Is there more Umbrella Academy coming? [Ed note: this is one of my favorite titles ever.]

Ba: There is more Umbrella Academy coming! We’re already working on the first issue, and it’s probably coming out next year.

TMS: At The Mary Sue, we try to give our readers pop culture options not only from female creators, but from other countries and cultures. What would you recommend to someone who wants to get to know “nerd culture” in Brazil? Like, Brazilian comics, science fiction, fantasy…

TMS: Are there any creators we should look for?

Moon: It’s probably easier to start with the ones you can find here…

TMS: Well, maybe we want to travel to Brazil! I hear Brazil is beautiful!

Moon: Well, Brazil is beautiful. There’s this guy called Gustavo Duarte, he does silent comics in Brazil, so they’re very universal. They’re funny, and kind of weird. He does a great take on Japanese monsters. He’s one recommendation. And he’s worked for DC and Vertigo, and he does great science-fiction. He’s a great storyteller.

Check out Two Brothers by Gabriel Ba and Fabio Moon out now from Dark Horse Comics!