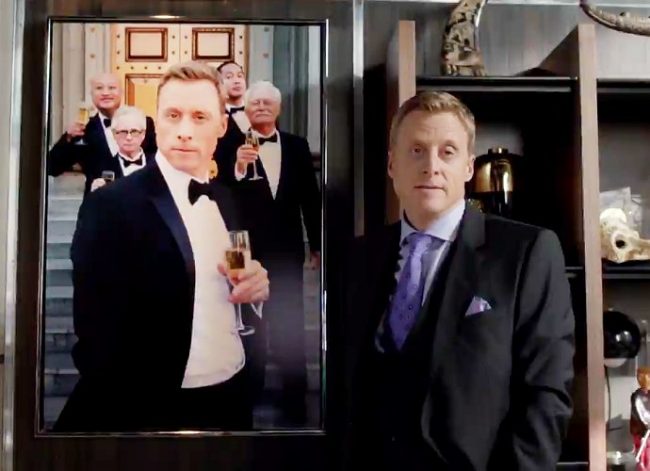 As he’s proven time and time again from geek favorites like Firefly and Con Man, to films like Death At a Funeral (one of my favorite movies for absolutely no reason), not to mention his facility with rooster voices, Alan Tudyk is very much at home with nerdy comedy. DON’T TELL ANYONE, but I have to say that this was the roundtable interview I was most looking forward to on the set of Powerless.

Tudyk plays Van Wayne, Bruce Wayne’s significantly less talented and accomplished cousin who wants nothing more than to be given his family due and be a part of the glitterati in Gotham City, but doesn’t actually want to, you know, work for it. He’s basically the worst boss ever at Wayne Security. We gathered on the lab set of Powerless to talk to Tudyk about whether Van actually has any redeeming qualities and whether his is actually a supervillain origin story.

But first, there’s the matter of some pretty major changes in his character from the original pilot that was filmed for the show before the change in showrunners. Now, instead of being a random rich dude who runs a random insurance company in the DC Universe, Van is now Van Wayne and the company is now Wayne Security, providing security solutions and products for civilians in the face of superhero and supervillain destruction.

“The change of becoming a Wayne was a big one,” he says. “[In the original pilot] I still was a rich guy who’d been pampered and who wanted to adv…actually, he didn’t even want to advance. He just wanted to do nothing, live in this office, and stay where he was. Now that he’s a Wayne, it brings in all of that. It brings in Batman, it brings in the family when he talks about his family, it’s immediately linked to Batman he wants to go to Gotham. That’s where he wants to climb the ladder. He doesn’t want to do anything, he just wants to be asked to be there. Because he’s a Wayne. But he doesn’t work. He doesn’t do a lot of work.” 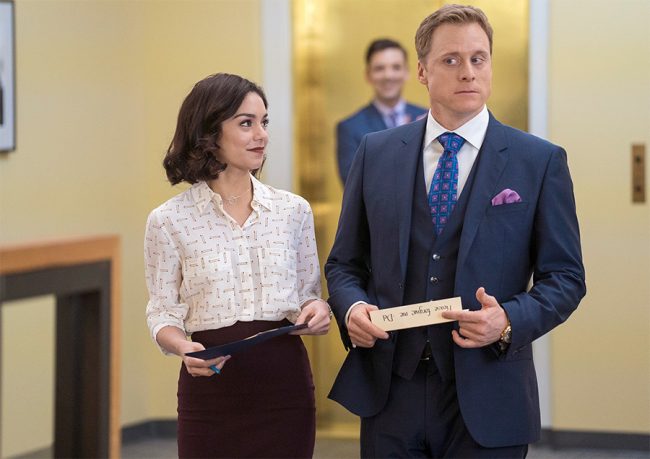 Bruce Wayne’s rich playboy lifestyle is basically Van’s ideal, but he doesn’t have any of Bruce’s intelligence or competence to back it up. He doesn’t know that his cousin is Batman, but even if he did, he wouldn’t want to emulate the superhero part. “I think he wants to be famous,” Tudyk explains. “And superheroes are famous, so in that way he’d like to be a hero as long as he doesn’t have to…he doesn’t work. He doesn’t really work too hard. I think being a superhero would require that. Also, he doesn’t have super powers. Batman doesn’t either, I guess, technically. But, like, he’s never been to prison in…wherever that was…”

By the way, Christian Bale is is favorite Batman, hence the reference.

It’s more likely that Van would want to date a superhero than be one. “But would a superhero date him?” he asks. “I don’t know.”

Despite the fact that his inferiority complex about being a “lesser Wayne” seems like the perfect supervillain origin story, Tudyk doesn’t think he’s ambitious, or quite cruel enough, even for villainy. “I think that when he does things that are callous or selfish, usually he’s self-centered, he doesn’t realize them,” Tudyks explains. “To be a supervillain, I think you really need to have that drive to poison the city’s water supply, or have grudges that are really deep. He’s just kind of, like, a bad boss. And kind of a dick.”

However, that doesn’t mean that Van is all bad. He has some good qualities, too:

Tudyk allows that, “You know what? He is a good salesman. He has to apply himself in one of the episodes, and he turns out to be good. It reminds me of The Office, when Adam Scott, they go on that retreat, and he has that stupid party that fails, and it’s just embarrassing, and it’s hard to look at, but he just kinda casually signs the biggest client that nobody thought that anybody could sign. And Van, with a lot of help from Emily, but Van is able to really bring in a big….not a client, what would you call it? A big fish. He lands a big fish. And it helps that it’s from Atlantis. [laughs]”

I’m assuming the word he was looking for was “account.” Still, Aquaman appearance? Mera? I’d be down.

Check out my previous interviews with Vanessa Hudgens and Christina Kirk as well as Danny Pudi and Ron Funches on the set of Powerless.