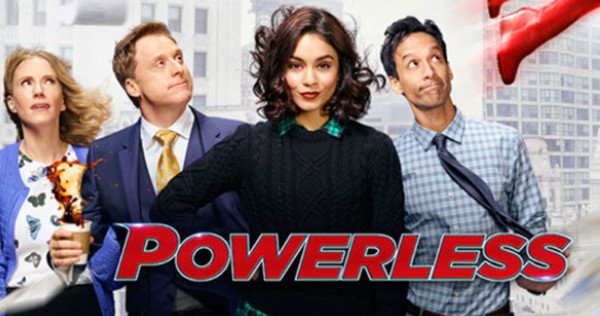 The set of Powerless is alive with the sound of Vanessa Hudgens’ gorgeous singing voice floating through the air between takes. At least, that was the case when I had the pleasure of visiting the set of NBC’s upcoming comedy on the Warner Bros. studio lot. The show premieres on Thursday, and the cast and crew are currently hard at work delivering a hilarious season. Thankfully, the cast and creative team found time to talk with us and give us some insight into the new show.

As you may already know, Powerless is an office comedy that takes place in Charm City at a company called Wayne Security, which provides products that keep civilians safe from superhero/supervillain clashes and superpowered crime. And yes, the company is owned by that Wayne, although it’s run by his cousin, the significantly less impressive Van Wayne (Alan Tudyk).

Vanessa Hudgens plays Emily Locke, a small-town go-getter who arrives with the desire to make the world a better place. On the other hand, her co-star, Christina Kirk, plays Jackie, a fellow Wayne Security employee who used to be as bright-eyed and bushy-tailed as Emily when she first started, but has become significantly more jaded since then.

I had the chance to participate in a roundtable interview on the office break room set, and they had a lot to say about the show’s down-to-earth, mundane (but also silly and funny) approach to the superhero genre. 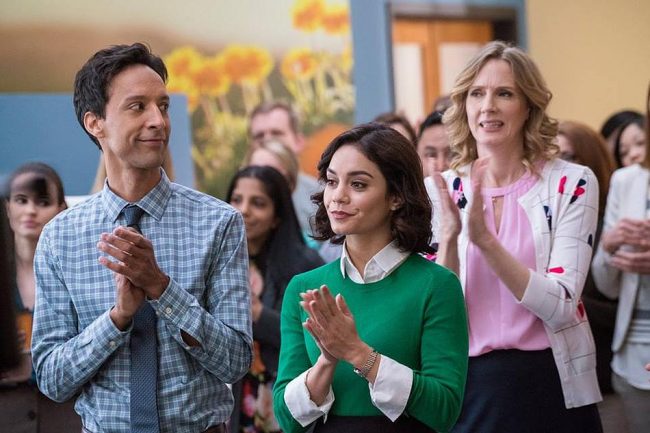 Since Hudgens was singing all the time on set, we desperately wanted to know if her musical chops would be put to use…perhaps in a musical episode of Powerless. “Musical things happen at times….” she said, not wanting to reveal too many plot points. “[But] not a musical episode. There could be one in the future. I’m singing all the time, so maybe they’ll get the hint.”

The ladies talked about Charm City’s villains, explaining that on their show, Crimson Fox and Jack O’Lantern (both appearing in Justice League Europe), are the resident hero and villain, respectively, as well as some other random characters. “I think the thing that’s really funny about our show,” Hudgens says, “is that, in Charm City, it’s kind of like B-list superheroes or villains. Like, you’ll never see Batman there, really…”

“Or WILL you…?” Hudgens laughs. 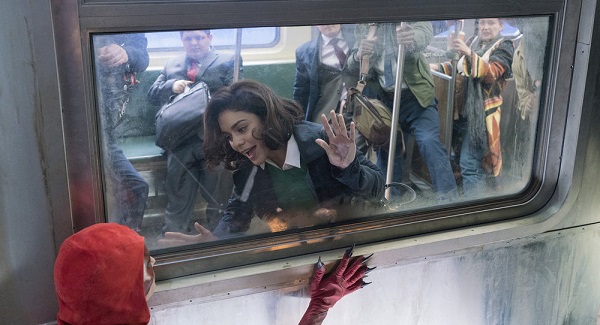 When it comes to Wayne Security’s products and inventions, the audience will be treated to a plethora of gadgets that are supposed to exist for the protection of the average person…but that the average person might not actually want to carry around. “Our products work,” Hudgens explains. “But they’re not necessarily the most practical things in the world. We use them, but carrying them around would be taxing.”

When it comes to Emily and Jackie’s relationship, Kirk says that although they have very different outlooks on life, “I definitely think they’re going to influence each other.”

Hudgens agrees that Jackie, as well as the office environment, will affect Emily (and not always for the better), but that ultimately, the core of Emily is true.

“Emily’s very positive and very optimistic,” she says. “I don’t think anything can change that because that is truly who she is. She truly believes she can change the world and she wants to, and she wants to motivate people to do the same. But obviously, being around superheroes and supervillains and getting used to the damage they cause…”

“And getting used to having Van as your boss…,” Kirk interjects.

“And getting used to having the worst boss ever…it definitely is taxing on Emily, but she stays chipper.”

Hudgens goes on to say of her character: “Emily’s brand-new to Charm City, she just moved there for this job, and she grew up in what she calls a ‘flyover state.” No superheroes ever stop there. So, she’s new to this whole superhero/supervillain world. But her dream is to run the Wayne Foundation. That’s what she wants to do. She wants to help people. She wants to give back. That’s her ultimate dream.”

When asked if Van is ever threatened by Emily and her ability to actually get quality out of her team, Hudgens laughs.

“No, he loves it!” she says. “He loves that she is doing all the work because that means that he can take all the credit and show Bruce Wayne that he’s getting ahead, so hopefully he can be transferred to the Gotham office. That’s his dream. That’s where he wants to be, but he doesn’t want to do any of the work, so…having Emily in the office is great for him because finally someone is doing something and he can say it’s him.” 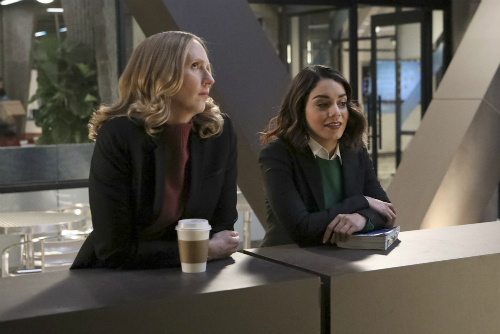 So, will we see these characters’ lives outside the office? We’re told that we will, but as is the case in most workplace comedies, most of the action will be happening in and around the office set.

“Our personal lives definitely gets brought into the picture,” Hudgens explains. “Just because we all spend so much time with each other. But our personal life tends to go down in the office. That’s where we talk about it.  Last episode [that we filmed], my character ends up dating a henchman, which is a casualty that happens in Charm City.” She laughs and shrugs.

Kirk has a slightly different take: “I think it’s also…so many of the great workplace comedies, there’s the thing that happens where the people you work with become a pseudo-family. Especially when you’re together all the time, and you’re working long hours. There’s the feeling that you become each other’s…but we’re also kind of a bunch of loners.”

Having this particular DC “superhero show” be a comedy rather than a gritty drama certainly allows for a different perspective, and a major hallmark of the show seems to be how little the characters seem to care about the fact that superheroes exist.

Says Hudgens, “It’s not about who’s the supervillain they have to kill this week. It’s like, what paperwork do we need to finish, and who’s trying to mess everything up?” Though Kirk says that superheroes and villains are “always affecting storylines indirectly, or tangentially, in broadcasts or other happenings in the city.” Hudgens cites an example, “Yeah, like Jack O’Lantern is constantly blowing up things, which then will create major traffic jams, and then you’re late to work.”

“I feel like, they live in this world, so they see superheroes and supervillains all the time, so it’s a very different experience,” Kirk explains. “It’s more like…the weather. It could just affect your day that way, or it could be very dramatic and a bummer, like someone actually really gets hurt. Maybe, sometimes people are starstruck, but it’s more about how it affects your day-to-day life than what’s happening with the superheroes and the supervillains?”

That may be just how people feel about Powerless itself. Sure superheroes and villains are nice…but what’s happening with the office employees?!