Interview: Danny Pudi and Ron Funches Geek Out Over Superheroes and Gadgets on NBC’s Powerless 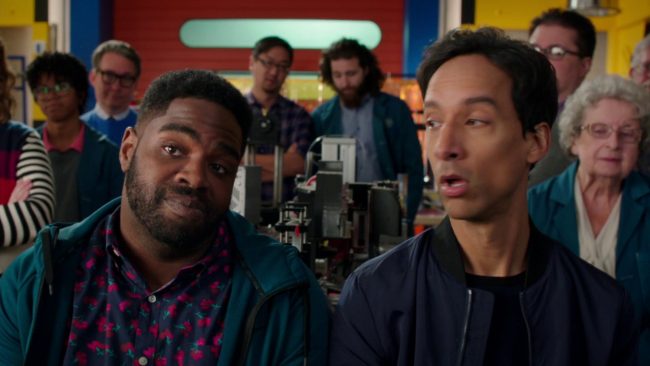 My parade of roundtable interviews from the set of Powerless continues with a chat with two of the funniest men on the planet. I’m talking about the incomparable Danny Pudi, and the made-me-laugh-so-hard-when-I-saw-him-do-stand-up-that-I-had-a-headache-the-rest-of-the-night (that he does not even feel that bad about!) Ron Funches!

It’s kind of hard to capture in print how funny even their delivery of regular conversation is, so for all of their quotes, just imagine them saying everything in the most Hilarious Way Possible.

Pudi plays Teddy, one of the idea guys at Wayne Security who, along with Funches’ Ron (yes, both he and his character are named Ron) come up with the off-the-wall inventions they produce to protect the public from superhero and supervillain damage. They’re great friends, but they’re also very opposite personalities. When asked about his character, Pudi had this to say:

“I think, inside of Teddy, there’s a struggle to…I think he’s used to, I don’t wanna say ‘second place,’ but…there’s an episode where you get to see Teddy’s family situation, and it kind of illuminates a little bit of Teddy’s story. You see sort of why he’s jaded a little bit. I think in many ways, he’s used to superheroes getting all the coverage, getting all the press, getting all the splashy love. And Teddy’s this guy, he has really brilliant ideas, but they never go somewhere. It’s kinda the same thing in his family. Like, he’s done good, but it’s never good enough. And I think that’s kind of Teddy’s struggle. He wants to make a big splash. I think he becomes a little less jaded, but he struggles to be like What can I ultimately do when Superman could come in here and crush me with his pinky? That’s kind of Teddy’s deal. “

Meanwhile, Funches’ character, much like himself, is much more cheerful, upbeat, and optimistic. “He’s got a lot of childlike wonder,” he explains. “He’s not necessarily a guy who’s looking to advance his career, or get out of here and go to Gotham like Van, or anything like that. I’m happy because I get to work with my friends. I’m happy that I’m with Teddy and Emily and Wendy. I’m a goof! So basically, if there’s a lot of goofy stuff going on, I’m involved in it. And a little bit of heart, too, because I’m getting good at acting. [laughs]”

While it seems that Ron will be primarily providing comic relief and support for the rest of the cast, Funches says that the “heart” part really does come into play, and we’ll get to see some of his life outside of work, too, particularly in an upcoming story involving the character’s grandmother, which he couldn’t tell us about. Though there’s nothing written about Ron’s home life after that, from what he hears, Funches suspects that “Maybe he has a little more going on at home than he lets on at the job.” 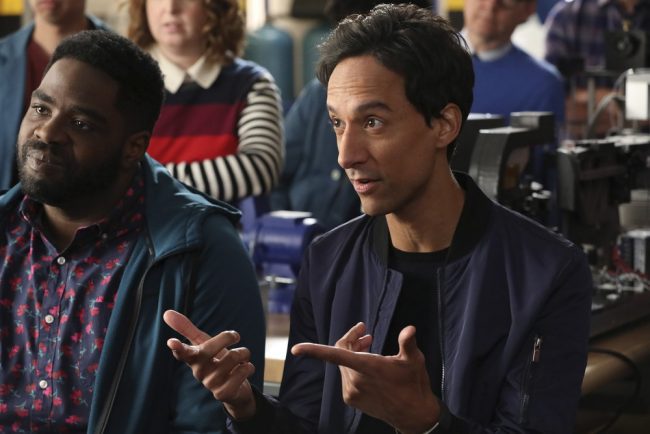 Ron was actually written specifically for Funches, as the role didn’t exist in the original pilot, which he revealed when asked how the original and the new pilot compare. “This is gonna be a fun answer for me because, guess what? I wasn’t in the original pilot! So for me, it’s just way better now!” he jokes. “And that guy before, I was like OK, whatever. This show don’t got ME in it. Now I’m like, OK, this GOOD!” He continues:

“I saw the old pilot, and I thought it was cute and fun and had some good jokes. But I think, as some of the producers said, the idea of doing different episodes around different [insurance] cases every week kinda seemed like it would run out of steam to me. So, I like this a lot more, because it seems like you can do something about superheroes, or you can do something just about your work life, or being new to town and dating. There’s a lot more options set in just this securities office, and it grounds it in Batman, you know, being at Wayne Security, so I think it’s better.”

The character we’ll get to know in the show was completely inspired by Funches. “I was working on another show called Undateable, that was cancelled,” he explains. “They brought me in, and they were just like Oh, you’re very funny. We liked you on the other show. Watch this pilot. If you have any ideas about what your place in this world would be, come in and talk to us about it. So, basically I just came in and pitched them the character. I was like, I’m good at playing me. I’m good at being excited and cheerful and happy, and I think people like that. And they were like WE like that. And they were like We can’t think of a different name, so you’re just Ron. Be you. [laughs]”

Since Teddy exists in such stark contrast to Ron as far as his general worldview, I asked him, if pushed to his limit, would Teddy go superhero, or supervillain? Pudi seems to think that might be a bit…complicated for Teddy. “You get to see Teddy pushed to his limit a bit in the third or fourth episode…I don’t know what he becomes!” he says. “One good thing about Teddy is that he’s very loyal. He’s very loyal to his team. He’s kind of like a curmudgeonly old man that’s not old yet. He’s just practicing those skills. So, he can be grumpy, but it’s also because he’s a tidy person, and he wants things done the right way. As far as hero or villain, I could honestly see him going either way depending on the circumstances. [laughs] Which is fun to play. But ultimately….? I think he’d probably be a hero, but he wouldn’t be your traditional hero.” 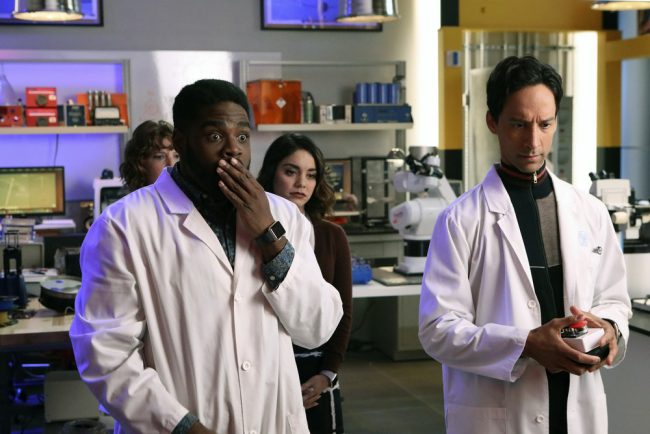 Both Pudi and Funches are huge nerds (as you’d probably expect), and they’ve each been geeking out while working on Powerless. For Pudi, getting to touch one particular gadget related to a certain Dark Knight was the most exciting. “The Batarang. That was Danny,” he says. “That was…I was just very excited to touch it. It’s also very heavy. But I think also, in terms of my character Teddy, he was just fascinated with the design of it. It’s the perfect design: it’s not too flashy, it’s not trying to be fashionable, it’s doing what it’s supposed to be doing.” Pudi then brings up another favorite superhero. “[Also] I mention The Flash a little bit. That was kind of exciting for me, because he was one of my favorites as a kid, and being able to just say The Flash on television is exciting.”

For Funches, it’s all about Green Lantern. When asked if he’s a DC fan, he answered at first with a simple, “I am. Next question.” But then he elaborated on the stuff he loves and talked about what comics he’s reading these days. “Currently, I’m not reading a DC book, I’m reading this book called Kill or Be Killed. And me and my son are always reading Teen Titans. That’s probably our favorite series. He’s a big…well, he probably is Beast Boy. And I love Cyborg and Starfire. But I’m just a big fan of Green Lantern, he’s probably my favorite superhero of all time — John Stewart if you needed to know the exact Green Lantern.”

He also revealed that Alan Tudyk got to dress up as a certain DC character that I won’t mention, because spoilers, but this was another huge geek-out moment for Funches. That, and he thought it was hilarious. Which, if I told you who the character was, you’d totally agree.

Being that Pudi is now one of the few people who’s had a role both in the DC and in the Marvel universes (where he had a role as a S.H.I.E.L.D. communications officer named Moore in Captain America: The Winter Soldier), he was asked how they compare.

“So far, I’m here way longer,” he laughs. “That’s pretty good. In the Marvel world it was very quick. I was kinda bummed out, because originally I got punched out by Captain America, and that was my whole dream. That’s everybody’s fantasy, you know? That didn’t last very long. It’s different here. In that world, I was more threatened on a daily basis, but here I get to dig into it a little more. So, so far it’s been cool.”

And of course, I had to ask: But how do either one of those compare to the Duck Tales Universe? Pudi let out a huge laugh, betraying his excitement for the animated reboot! “Now we’re really getting in there!” he exclaimed. “I get to interact with people here? Which is really great? That’s awesome! A lot less feathers here. Duck Tales has been crazy. Each project has been a little different, but that one I feel like a kid again the most. It feels like I’m racing home from school pretending to do homework, and really trying to sneak in some Duck Tales and Tail Spin, when I really should’ve been paying attention to books. Each great in a different way.”

Meanwhile, Funches is excited to be working with someone as versatile as Pudi when it comes to comedy. “I think in particular I think I was really surprised by how much I really like working with Danny,” he says. “He’s just really fun to play off of. If you improvise anything, he doesn’t need you to be like Hey, I’m gonna do this, so be ready. He’s just ready. So, if I change something up, he just goes with it, and I think he’s probably my favorite person to play with. But I love working with Alan, with Jennie [Pierson, who plays Wendy], with Vanessa…there’s no one negative here, which was a big difference for me! [laughs] I was used to being the most professional person sometimes, and here I gotta up my game…And I’m not into that. [laughs]”

What would Funches be into? Getting some Green Lantern action on Powerless. “I would love it if maybe he lost a ring, and I found it! Also, just making out with Supergirl, whether it’s on the show or off the show. Whatever she’s interested in, really.  Those would be the things I’d want.”

Would Melissa Benoist be down for doing some comedy?

Check out my previous interview with Vanessa Hudgens and Christina Kirk on the set of Powerless.