For the Herd: Why The Internet Loves My Little Pony 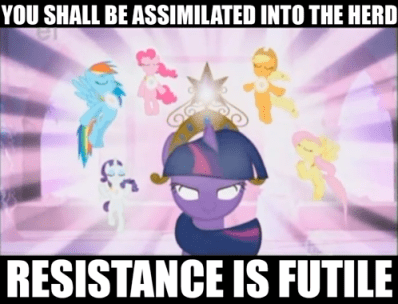 If you spend more than thirty minutes a day on the Internet, chances are sometime, somewhere, you’ve chanced across a rage comic — those badly-drawn (on purpose, of course) image macros that hail from the likes of Reddit. Every couple of days or so while browsing Reddit’s “f7u12” section, I happen across a comic wherein a grown man watches the new My Little Pony reboot and becomes addicted to it. I always found this pretty hard to believe, and dismissed them as a running gag. I mean, the original My Little Pony was too sugar-coated for me when I was a little girl, and my room was full of enough pink and stuffed animals to give a goth a seizure. Granted, I’ve since matured into a different beast and my all-male group of gamer friends has kindly begun informing me that my gender is now “bro”, so perhaps it’s best to take my opinion with a grain of salt.

Nevertheless, the prevalence of these comics got me wondering if perhaps there was some seriousness to them after all. And it’s not just the comics, either: Pony memes from “Derpy Hooves” to YouTube remixes have sprouted all over the Intertubes and reached the attention of the series’ creator and its artists, many of whom have begun to join in on message boards and insert subtle meme references into the show. So, I thought, let’s go see what the big deal is. What is it about My Little Pony: Friendship is Magic that can charm fully-grown male and female nerds alike? The problem with the old My Little Pony is that it didn’t have a plot or a purpose, which I suppose is fine if you just want to sell toys. I wouldn’t call the main characters ‘protagonists’ so much as just ‘reoccurrances’; they weren’t developed, they weren’t memorable, and you couldn’t tell them apart. The “conflict” in every episode seemed to stem from petty social drama and little else, because surely anything more would be too much for little girls to handle! Nevermind that its release overlapped the likes of She-Ra.

Needless to say, I was quite surprised and quite impressed when I pulled up the first episode of My Little Pony: Friendship is Magic and discovered that not only did it have a plot (at least for the first two episodes), but it also had memorable and identifiable characters who were actually developed. And not only that, but our main characters were not collectively girly.

The main protagonist, Twilight Sparkle, is a bookish, learned, and altogether nerdy girl who will actually call her friends out in their less-than-reasonable moments. Rather than prancing through fields of flowers and singing, she’s mature and she wants to better herself through her education. Right off the bat, the show has told young girls that A) it’s ok to be a nerd, and B) be proud of your brain, and FILL it with knowledge. Yes. Similar to Twilight, there are two other ‘strong’ ponies. Applejack is a tough, confident, hard-working, no-nonsense country girl who will get the job done and who encourages girls to do the same. Rainbow Dash is an athlete and a tomboy (who some have argued to be lesbian), who shows that it’s ok to be tough and ambitious and that it’s great to be active. These three alone could beat the snot out of Lickity Split and the pony herd from the 80’s.

The three remaining main characters are more traditionally what you’d expect from the MLP franchise. Somewhat. Rarity is obsessed with fashion, makeovers, and romance, but she’s usually classy about it. She’s less Bratz and more Breakfast at Tiffany’s, which is certainly a massage I’d prefer if girls positively must be fashion-centric. Fluttershy, as her name implies, is timid, passive, sensitive, and demure, and she spends her time caring for baby animals, but really…she’s so cute that I’ll forgive her for it, and the Internet can’t argue that it doesn’t like baby animals. And finally, there’s Pinky Pie, who is simply…insane. No, really. They call her ‘Pinky’ for short, which seems apt because she’s an awful lot like a certain lab rat from the 90’s. Pinky’s not girly so much as she just likes to party, but it’s more of a character quirk than it is an encouragement, I think. A lot of the show’s humor comes from her.

Oh, and there’s Spike, a baby dragon who is the only male character with real lines and the only character reincarnated from the original show. Spike is sort of the embodiment of all that is stereotypically boy, but he is also the source of the show’s moments of clarity. In the few times when things do get really girly, Spike responds with the kind of reaction the audience is probably having. Perhaps most importantly, however, is the fact that all these characters have noticeable flaws. Twilight can be reclusive, single-minded, and can over-complicate things; Applejack brings stubbornness to a whole new level; Rainbow Dash is abrasive and arrogant; Rarity is flippant and self-centered; Fluttershy couldn’t assert her way out of a wet paper bag; Pinky can get on everyone’s nerves; and Spike can gross everyone out. It’s obvious that they put a lot of care into these characters to make them enjoyable, relateable, and believable, which one is hard-pressed to find in half the adult shows out there these days.

The first two episodes treat us to an adventure wherein we’re introduced to the land that the ponies live in and the lore surrounding it. Apparently two sisters, Celestia and Luna, have ruled over the ponies for centuries as part monarchs, part god figures. Celestia made the sun rise every day, and Luna gave us night. Luna gets pissed that her sister gets all the attention and transforms into a pretty badass dark pegasus, who Celestia imprisons with six gems of power. The gems are lost, Luna is forgotten, and all that remains is an old prophecy stating that on the 1000th anniversary of her imprisonment, the stars will free her and she will return. In short, we’ve got a great setup for an RPG.

To make a long story short, Twilight reads about all this and tries to warn everyone about Luna — who now goes by the name of Nightmare Moon — and her return, but nobody cares or believes her until it actually happens. Backed up by her fellowship of five other ponies, she goes out to recover the gems and beat the baddie. Along the way we’re shown that not everything is, well, rainbows and unicorns in Ponytown. Beyond the borders of Celestia’s kingdom, there’s actually a whole cadre of fantasy monsters, from manticores to gryphons to dragons and more, and it’s actually quite treacherous for the ponies to leave their own territory.  This is a pretty cool sense of danger to what one would expect to be a fluffy show, and the fact that the outside world acts differently than it does in the ponies’ native Equestria comes into play in several later episodes.

In any case, because it’s a show aimed at a younger audience, the outcome is predictable. Nightmare Moon, despite her awesome power, uses her magic in pretty weak ways to hinder the ponies, and they easily overcome the challenges she sets for them. They manage to recover the jewels, whose powers just so happen to correspond to each of their strongest personality traits, and Nightmare Moon is transformed back into her real self. The day is saved! 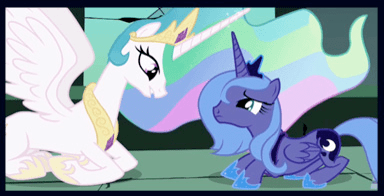 …and then that’s it.

Honestly I wish the day hadn’t been saved, because there’s so much plot and conflict they could have had with Nightmare Moon as a recurring baddie. I’ve since seen 16 episodes and she hasn’t returned. As things currently stand, Luna’s mended things with her sister and hasn’t been seen since.

From here, the plot seems to have vanished in favor of unrelated problems that can be solved in one episode, but for the most part they seem to be avoiding the junior-high drama that was so prevalent in the previous MLP incarnation. The only exception to this is an episode wherein Twilight is given two tickets to a ball, and all her friends go nuts with jealousy trying to get the other ticket. This is standard fare in girls’ shows that I hate to see, and it’s been done to death. Other problems, such as an undermanned ranch or an intruding dragon, are solved through hard work, cooperation, and cleverness, and this seems to be the norm. To date, nothing has been fixed with fairy dust or group hugs (well, ok, one group hug — but it was the stupid ball episode), but the shows will always end reinforcing that friends are treasures and with them anything is possible. It’s a pretty sunny theme, yet a welcome relief from the kind of cynicism that’s prevalent in many other shows.

The artwork is clean and minimalist, but also colorful and fun — it’s essentially a long flash animation, which certainly explains its Internet appeal. The episodes are surprisingly funny, with humor that anyone can get or appreciate, and they’ve slipped in many nods for the older crowd. I remember one episode where the ponies kept fainting and making goat noises, ala Tennessee Fainting Goats;  who other than Internet-dwellers would get that joke? Speaking of which, lazy-eyed ponies in the background have now become a running gag courtesy of the Internet, and a gray pegasus with a blonde mane and “derpy” eyes has since made several appearances. 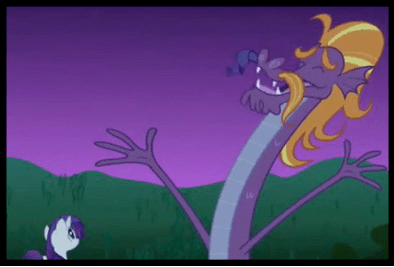 The show also addresses several things I wouldn’t have expected to show up in today’s overly-sterilized kids’ fare. In the second episode, for example, the ponies encounter a rather flamboyant purple dragon who’s upset that Nightmare Moon destroyed half of his moustache. Rarity says something along the lines of, “We must punish this crime against fabulousity!” and cuts off her tail so she can use it to magically regrow the dragon’s hair. The thing is, Rarity’s not saying this in a mocking or even silly manner, and the ponies don’t approach this dragon as though he’s an oddity. They’re genuinely concerned for him, and they treat him as an equal. In return, he helps them for their kindness. How many kids’ shows have recently thrown a gay dragon at you, and more importantly, how many treated him respectfully? Later on, everything from racism to period metaphors to the great science vs. religion debate comes into play.

There’s so much more I could detail, but let’s face it, that’d be venturing into TL;DR territory. Overall, while I’m not addicted to this show, I do enjoy it and I am impressed. It approaches young girls assuming that they have a functioning brain in their heads, and assuming that they care about more than clothes, proms, and the color pink. Moreover, it introduces them to things that matter, and situations that will actually apply in the real world. And I think that’s why the nerd crowd appreciates it: it’s fun, it’s honest, it dips into fantasy geek culture, and its writing is surprisingly strong. I dare you to watch this show on a bad day and not come away feeling at least a little better.