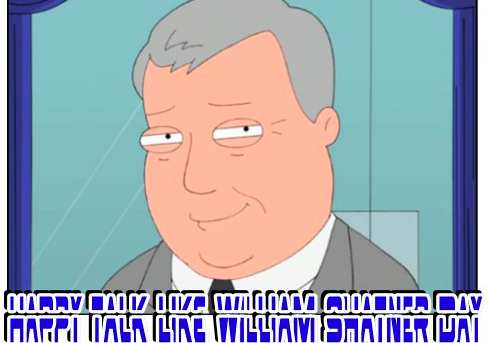 Last year, voice actor Maurice LaMarche (of Futurama/Simpsons fame) dared to dream that one day, the world would unite in its shared love of William Shatner impressions through spontaneous and unabashed mimetic vocalizations of one of history’s most well-known voices.  After seeing that dream come to fruition last year, today we officially celebrate the second annual “International Talk Like William Shatner Day.”

For the uninitiated, International Talk Like William Shatner Day was the brainchild of not only LaMarche, but an Ohio resident named Doug VanHorn.  Back in 2009, the two strangers were brought together by Facebook when each independently decided to declare March 22 International Talk Like William Shatner Day. (The date isn’t total coincidence; March 22 is Shatner’s birthday.) Though they started off as enemies thanks to a dispute over who came up with the idea first, they’ve since joined forces and are now co-admins of ITLWS Day’s official Facebook page, proving that all things Shatner are indeed, very good.

How exactly does one celebrate International Talk Like William Shatner Day?  In LaMarche and VanHorn’s own words, it’s quite simple really:

So come one, come all, andpause… in… strange … placeswhenyou…… speak… EVERY… March 22nd. Be instructed… by LaMarche’s videos… REVEL… in Doug Van………….Horn’s vision! And TALK….. likewilliamshatner.

This year’s celebratory instructional video features incredible Shatner impressions by two of the best, LaMarche (naturally) and comedian Kevin Pollak.  Watch as they take turns reading lines from Shatner’s new Twitter-based television pilot Shit My Dad Says, or better yet, close your eyes and listen as the Shatner washes over you:

Go ahead, give it your best Shatner.  Oh, and while you’re at it, don’t forget to wish William Shatner a Happy 79th Birthday today!