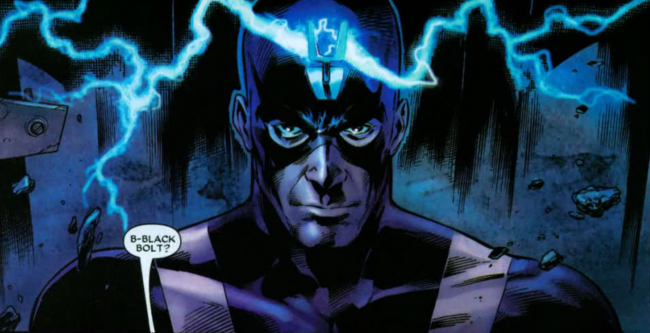 Seeing as how the Inhumans are quickly coming to the fore in nearly every aspect of Marvel culture, it only makes sense that the so-called King of the Inhumans, Blackagar Boltagon (a.k.a Black Bolt) would be getting his own solo series. What’s more, popular novelist Saladin Ahmed (Throne of the Crescent Moon) will be teaming up with artist Christian Ward (ODY-C), forming a really exciting dynamic duo that gets me super stoked to see what they can come up with.

Along with an exclusive cover reveal, Ahmed chatted with io9, pulling the curtain back just a little bit to show what Inhuman fans can expect to see in Black Bolt. While he stresses that the book is geared towards and focused on bringing in new readers, he also says that there’s plenty there for folks who have enjoyed the “cult classic” aspect of Inhumans since the beginning. Of that “cult” aspect, Ahmed said, “They’ve never been as famous as the X-Men or The Hulk, or Spider-Man, or anything like that. For more kinda hardcore Marvel nerds, they’re these touchstone characters.”

Balancing appeasing both old fans and potential new ones can certainly be difficult, especially when it comes to comics. “So, the challenge is bringing him to new readers,” said Ahmed. “He’s this kind of strange, sort of ‘60s cosmic Marvel character. Very much a creation of his time.”

Fans of Agents of S.H.I.E.L.D. who might not have heard of the Inhumans before certainly are familiar with them now, as their presence has come to dominate the show. Black Bolt might be a good on-ramp into the wider world of the Inhumans, alongside other popular heroes like Ms. Marvel. Marvel (the company, not the hero) is poised to expand its world while at the same time expanding the kinds of stories it wants to tell. Bringing in Ahmed is especially excellent, because his ideas around story and storytelling are vastly appropriate to our current condition.

This is evident where Ahmed shared a bit about what we can expect regarding this and future story arcs. After talking about how he was brought into the project, he said:

But at the same time I had a back pocket pitch about incarceration, and some other stuff that was missing a piece. And I knew that the co-star of this [pitch] book was Crusher Creel, the Absorbing Man—it was a book about being locked up, basically. But I only had these very dim concept of this project, I didn’t know who the real star was. So when Marvel came to me and said, “Hey, would you consider doing a Black Bolt book?”, for plot reasons I can’t get into, it happened to sync up really well. This kind of nascent idea of a prison book I had. And they’re picking me for the Black Bolt book ended up linking really well for reasons that will only become apparent to the readers once we’re amidst the plotline.

Already, I’m finding myself fascinated with what Ahmed is pitching, and the promises he’s making about Black Bolt. You can be sure this has made my own pull list, and I’m stoked to see what happens.