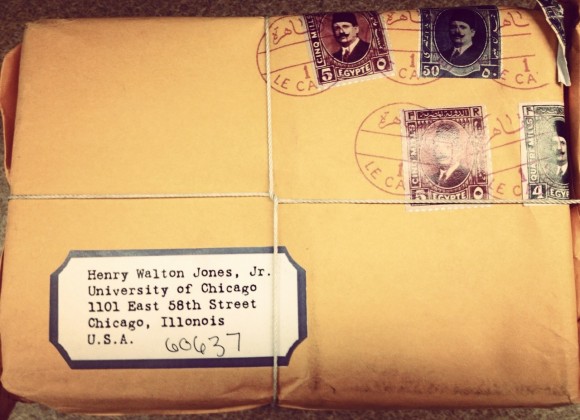 Do you like a good mystery? Do you also like Indiana Jones? (What am I talking about? Of course you do.) Then this story is for you. A mysterious package found in the mail room of the University of Chicago was addressed to Henry Walton Jones, Jr…. better known as Indiana Jones.

As per a post on the UChicago College Admissions Tumblr, “The package contained an incredibly detailed replica of ‘University of Chicago Professor’ [and Indiana’s mentor] Abner Ravenwood’s journal from Indiana Jones and the Raiders of the Lost Ark.”

“It looks only sort of like this one, but almost exactly like this one, so much so that we thought it might have been the one that was for sale on Ebay had we not seen some telling inconsistencies in cover color and “Ex Libris” page (and distinct lack of sword). The book itself is a bit dusty, and the cover is teal fabric with a red velvet spine, with weathered inserts and many postcards/pictures of Marion Ravenwood (and some cool old replica money) included. It’s clear that it is mostly, but not completely handmade, as although the included paper is weathered all of the “handwriting” and calligraphy lacks the telltale pressure marks of actual handwriting.

The address on the package, which wasn’t actually mailed (there’s no US postage on it, and the antique-looking stamps appear to have been photocopied) is one specific to Rosenwald Hall. Though Rosenwald is now home to the Econ department and College Admissions, it used to be the geology and geography building. The plot thickens…

UChicago has set up an e-mail address ([email protected]) where people can send any clues or suggestions as to who sent the journal and why they might have done so. They’ve assembled a few theories since the journal was found two days ago; my favorite is “Harrison Ford REALLY wants to go on a date with someone in our office and this is how he got our attention.” Keep the dream alive!

(via: Death and Taxes)