Indiana Jones Exhibit Finally Brings the Ark of the Covenant to a Museum, Where it Belongs

The LA Times has a great interview up with three of the people behind Indiana Jones and the Adventure of Archaeology, a museum exhibit that is just beginning a six-year international tour (with no dates yet listed in the United States, although were are hoping really really hard that that changes soon… we’d love to see it at the Met, or the New York AMNH, or… MoMA, even, I mean, Indy films are modern art, right?)

Apparently some people at Lucasfilm realized that the 30th anniversary of Raiders of the Lost Ark was coming up, and despite the hero’s frequent insistance on it, they’d never actually had a formal exhibition of Indiana Jones props, and somebody had a brilliant idea that if they could draw a bunch of people in to see an Indiana Jones exhibit, that would be an excellent time to teach them a bit about archeology.

According to Geneviève Angio-Morneau, co-project manager of the company producing the exhibit for Lucasfilm:

One of the main ideas was to have an exhibition that would focus, yes, on the artifacts and the props and the costumes and the artwork from the Lucasfilm Archive, but also to have real artifacts …. We might be coming across visitors [making] their first contact with real archaeological objects, so doing an exhibition about archaeology, this was a really important part of the concept for the exhibition. It was also one of the biggest challenges to have these two completely different collections living in the same space, so when we designed the exhibition, we made sure that these objects were in separate actual spaces. We designed the exhibition as kind of a mirror effect.

Which is when they brought in National Geographic archaeology fellow and explorer Fredrik Hiebert, who says that when he teaches Intro to Archaeology courses at his university he always asks “How many of you were inspired by Indiana Jones?” on the first day, and the number of hands that go up has been steadily rising for years.

What’s amazing is that this is the 30th anniversary of the first Indiana Jones film, and these students are like 20 years old, and 70% of them raise their hands, saying they were inspired by the films. That is one of the world’s most awesome inspirations that could happen.

As for his favorite part of the exhibit?

The photo albums of Hiram Bingham, who was our first sort of rock-star archaeologist 100 years ago. He documented the fabulous city of Machu Picchu. This year is the 100th anniversary of that. We have his original photographs. It is kind of amazing. Hiram Bingham was an archaeologist, but he was also a photographer. And there’s a picture of him standing in front of his tent at Machu Picchu with his hat on, and I’m thinking, that is Indiana Jones, and that’s 1911, and then there’s the Indy films, and then there’s today, us looking at him, at Hiram Bingham, and thinking, wow, 100 years ago, and him inspiring Hollywood. The one point in the exhibition where all the different threads of the themes of the exhibition come together. It’s Hollywood, it’s the origins of archaeology, it’s ancient discovery and civilization, it’s that tingle of seeing something that nobody’s seen for hundreds of years, through the lenses of the camera …. If there’s one thing that can be sort of a synthesis of it all, for me, that’s where it lies in the exhibition. 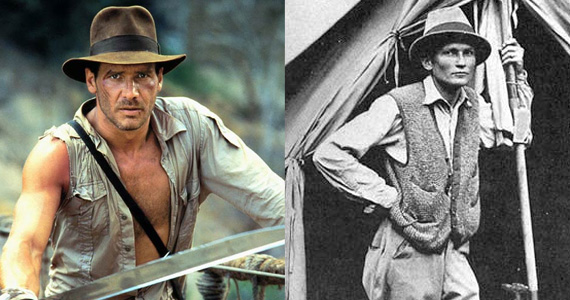 Give the whole piece a look at the LA Times.