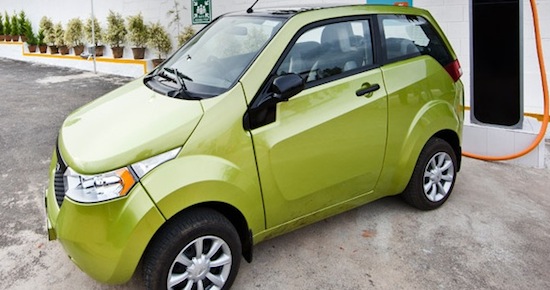 The Indian government has approved a plan to invest $4.1 billion dollars — or an even more impressive 230 billion rupees — in helping to develop technologies that will make electric cars a viable choice for more Indian consumers. Their roads are getting more and more crowded with vehicles every year, thanks to a growing and vehicle hungry middle class. But that surge in vehicles on the road has contributed to making India’s air the most polluted in the world, according to a study published earlier this year. The government is hoping to stop, or at least slow that pollution by putting 6 million electric vehicles on Indian roads by 2020, and is putting its money where its mouth is to spur innovation and investment in next generation batteries and fuel cells to power those vehicles.

While India still has fewer cars on the road than countries like the U.S. and China, those cars tend to be heavy polluters. There are some electric models available in India — like the Mahindra Reva, pictured above — but high prices put them out of the reach of everyday consumers. The Reva, for example runs about $12,000 —  four times more expensive than the popular Nano produced by Tata Motors. Instead of looking to electric cars, Indian manufacturers have looked to develop fuel efficient, low emission vehicles, especially after the government ended a significant subsidy for the vehicles earlier this year.

This latest round of government investment could give the industry cause to look more seriously at electrics as the vehicles of the future. About 2/3 of the funding will come from government coffers, with contributions from the auto industry making up the rest. The money will go not only towards research and development, but also help to put in place the charging infrastructure key to mainstreaming electric cars. And considering the energy distribution problems and blackouts India has faced recently, that’s no small challenge.