'Law & Order: SVU' Made an Incel Episode | The Mary Sue 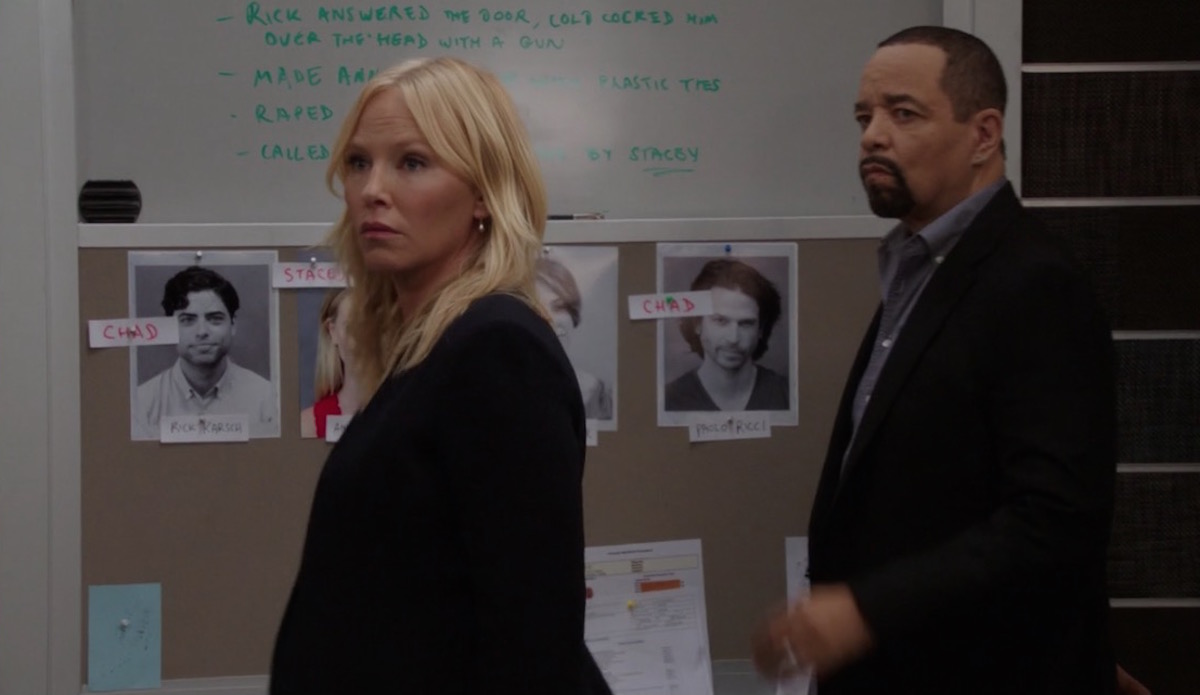 For many women on the internet, incels have long been a particularly disgusting misogynist presence. But until recently, “incel” wasn’t a word known by most people. Your parents, for example, might know about sexist online trolls but probably weren’t familiar with the specific strains. Lately, though, that’s been changing.

There have been a number of high-profile mass murders committed by self-proclaimed incels, and incels were recently called out by the Anti-Defamation League as a dangerous hate group with ties to white supremacy.

And now incels have fully entered the mainstream zeitgeist, as they were the subject of last week’s Law & Order: SVU.

In the episode, titled “Revenge,” a masked fake pizza delivery guy attacks a couple in their home, hitting the man with a gun and raping the woman. Throughout the ordeal, he calls the man Chad and the woman Stacy, which are not their names. Another couple has the same encounter soon after.

The cops are stumped. Did the guy hit the wrong address? Who are Chad and Stacy? For those familiar with the terms, it’s an agonizing 12 minutes (nearly a third of the episode) before Carisi thinks to run the names through the “dark web,” as if these men don’t exist in easily searchable public subreddits.

But it’s there in the dark web that he learns about incels, or “involuntary celibates,” and how they’re filled with rage over being denied the sex they feel they’re entitled to. (When they do eventually bring in a suspect, he calls sex a Constitutionally guaranteed right, as part of that “pursuit of happiness” thing.)

He explains how “Chads” are sexually active perceived alpha males and “Stacys” are attractive women who have sex with Chads. Ice-T chimes in that that’s ludicrous because “that’s why God invented hookers.” Carisi responds that “Sex workers are part of the problem. For these guys, men shouldn’t have to pay for sex. A woman should want to please any man, any time.”

While the show gives a decent introductory explainer of this dangerous group, this exchange is so disappointing. The idea that incels’ problems can be solved by sex workers is as common an argument as it is dangerous. Incels are not just regular men who have trouble finding dates. They’re angry, entitled, potentially violent misogynists whose identity is rooted in their deep disdain for women. Sex workers cannot be used as a shield to protect other women from their dangerous behavior.

The idea that sex workers (or sex robots, as is often suggested) can “fix” incels also presumes that their issue really is a lack of sex. But, as with most sex crimes, the root of their anger isn’t about sex, it’s about power. They feel entitled to sex because they believe they are superior to women, that women should be their property, and they are outraged that women have the ability to demonstrate agency. (This is also why incels often exhibit white supremacist beliefs as well as sexist ones. They are furious that they aren’t recognized as superior to women and POC.)

**Spoilers for the episode ahead, if that’s a thing you care about.**

The episode of SVU ends up having a Strangers on a Train-type twist, where the men met online and “traded rapes,” so that they each had alibis when the woman they wanted to target (and could be connected to) was attacked. That’s actually totally fitting for incel culture because, again, it’s not about desire for a specific woman. It’s not about unrequited crushes. It’s about demonstrating power over all women.

Still, that important plot point feels accidental. It’s been shown that SVU has made strides in increasing its audience’s understanding of issues like consent and rape culture. But its tackling of these weighty issues can be awfully clumsy or half-baked, and this is definitely one of those instances. In the end, their “explanation” of the crimes committed by the worst of the incels we meet is tied to a high school obsession and a missed connection, as well as “mommy issues.”

In examining the evils of incel culture, SVU gets halfway there. It’s disappointing that the subject is ultimately left on a note of “if his mother hadn’t screwed him up” or “if the girl had gotten his prom invitation” (it turns out he had his crush’s phone number wrong), maybe he wouldn’t have turned out this way.

I’m glad SVU is exposing incels to audiences that might not be familiar with their disgusting beliefs, but it would have been nice to see a deeper look at how systematic misogyny, racism, and rape culture have contributed to these communities of men obsessed with white male dominance, rather than focusing so hard on one individual’s more easily understandable motivations.