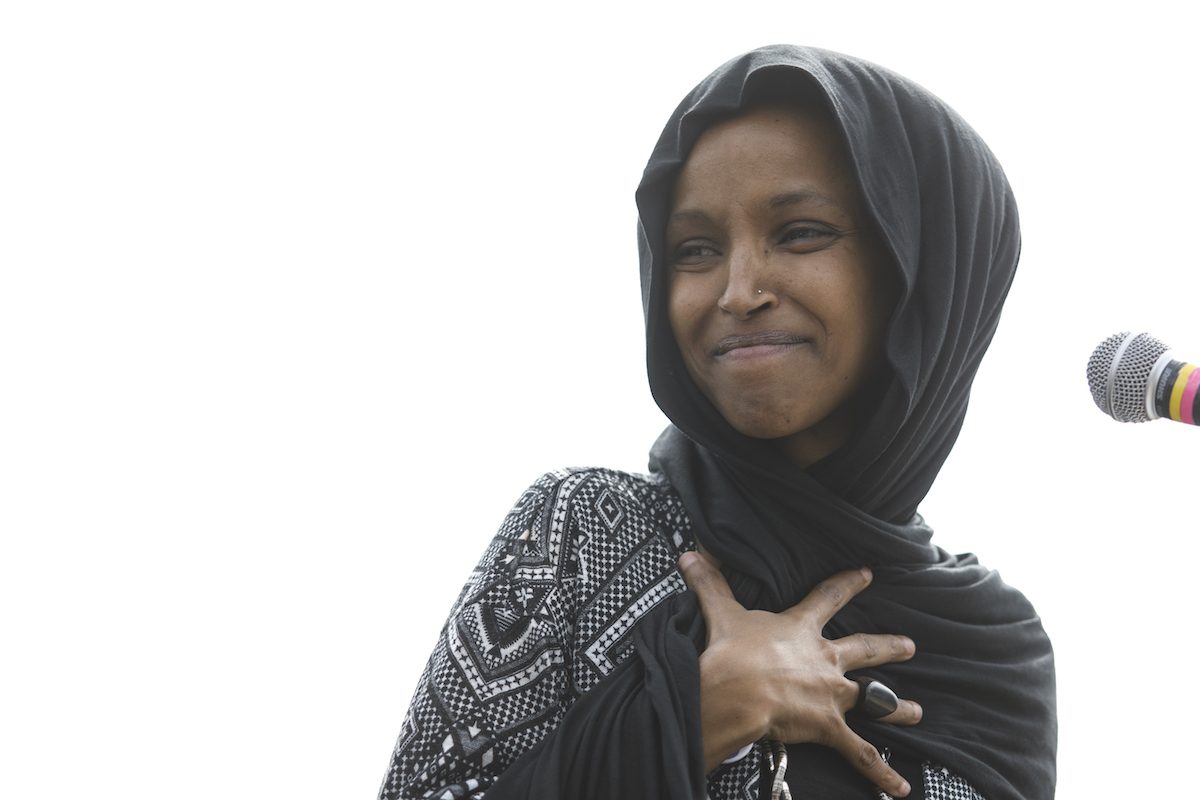 Last week, Donald Trump tweeted out a deliberately misleading video criticizing Congresswoman Ilhan Omar’s recent comments about anti-Muslim discrimination following the terrorist attacks of 9/11. The video takes an excerpt from a speech Rep. Omar gave at a banquet hosted by the Council on American-Islamic Relations (CAIR), in which she describes the attacks as how “some people did something,” cut together with footage of the Twin Towers and the Pentagon burning. “We will never forget,” the video reads.

That quote from Omar went viral last week because when taken out of context, it sounds like a flippant diminishment of violence and terrorism. If you listen to more than those four words, though, it’s obvious that that’s not what she was saying. Those four words came about 15 minutes into a 20-minute speech, in which Rep. Omar was talking about the discrimination Muslims face in America, where their religion is too often equated with violence.

Omar described the pressure to “be a good Muslim” and not make non-Muslims feel “uncomfortable.” But, she says, “no matter how much we have tried to be the best neighbor, people have always worked on finding a way to not allow for every single civil liberty to be extended to us.”

She goes on to list a number of scenarios in which Muslims face discrimination–when seeking care in hospitals, or when trying and being unable to find a place to pray “in a country that was founded on religious liberty.” No matter how hard Muslim Americans work to not make waves, far too many people will always see them as causing a storm anyway. “So to me, I say, raise hell,” Omar said. “Make people uncomfortable.”

From there she went on to say, “Here’s the truth. For far too long we have lived with the discomfort of being a second-class citizen and, frankly, I’m tired of it, and every single Muslim in this country should be tired of it. CAIR was founded after 9/11* because they recognized that some people did something and that all of us were starting to lose access to our civil liberties. So you can’t just say that today someone is looking at me strange and that I am trying to make myself look pleasant. You have to say that this person is looking at me strange, I am not comfortable with it, and I am going to talk to them and ask them why. Because that is the right you have.”

“Some people did something and that all of us were starting to lose access to our civil liberties.” That was her point. Not to diminish the attacks of September 11, but to speak about the vilification of Islam. It’s very clear that Donald Trump and the many, many others attacking her didn’t bother to watch her full speech, or even a full minute of it for context.

First Member of Congress to ever describe terrorists who killed thousands of Americans on 9/11 as “some people who did something”.

However, it’s not just those attacking Omar who seem to lack context. Even many of those attempting to show her support are still mischaracterizing what she said, either because they didn’t watch the speech, or because they’re afraid of taking a stance that might alienate those who didn’t.

As a Senator who represents 9/11 victims, I can’t accept any minimizing of that pain. But Trump’s dangerous rhetoric against @IlhanMN is disgusting. It’s a false choice to suggest we can’t fight terrorism and reject Islamophobic hate at once—a president should do both.

A lot of people doing clownery and tweeting vague nonsense about Trump’s rhetoric instead of specifically addressing his attacks on Ilhan Omar. Do more. Do fucking better.

After Trump–who, by the way, callously (and falsely) bragged on the afternoon of September 11, 2001 that he now owned the tallest building in Manhattan–posted the video, Congresswoman Omar says she “experienced an increase in direct threats on my life ― many directly referencing or replying to the President’s video.” House Speaker Nancy Pelosi called on Trump to take the video down and made sure Omar had enough security to combat the increase in threats.

.@realDonaldTrump’s dangerous video must be taken down. I have spoken with the Sergeant-at-Arms to ensure that Capitol Police are conducting a security assessment to safeguard Rep. @Ilhan Omar, her family & her staff. They will continue to monitor & address the threats she faces. pic.twitter.com/Grb9c8S18d

Perhaps the saddest and most infuriating part of this is that the response to Rep. Omar’s speech proves her point exactly. Her words are consistently approached from a place of extreme bad faith simply because of her religion.

“Ilhan’s real crime for those attacking her is that she’s an unapologetic Black Muslim woman who acts and speaks like she’s equal.” #IstandwithIlhan

“The bad-faith attacks against Omar … are predicated on the notion that Omar is already presumed guilty. She isn’t afforded the presumption that she would find the 9/11 attacks just as abhorrent as anyone else ― all because she’s Muslim.”

That assumption relies on the misconception that 1. Muslim and American can never be one thing, and 2. That Islam and terrorist are synonyms. It’s why Republican officials use Omar’s face to represent terrorism. It’s why Fox News hosts feel free saying “you have to wonder if she’s an American first.”

That is what Omar was saying in her speech. That some people engaged in a terrorist attack and that the only group those people represent is other terrorists, but that too many non-Muslims will never believe that.

No one person – no matter how corrupt, inept, or vicious – can threaten my unwavering love for America. I stand undeterred to continue fighting for equal opportunity in our pursuit of happiness for all Americans.

*This was a misstatement by Rep. Omar. CAIR was founded in 1994. A rep for Omar told the Washington Post that she “meant to refer to the fact that the organization had doubled in size after the Sept. 11 attacks.”