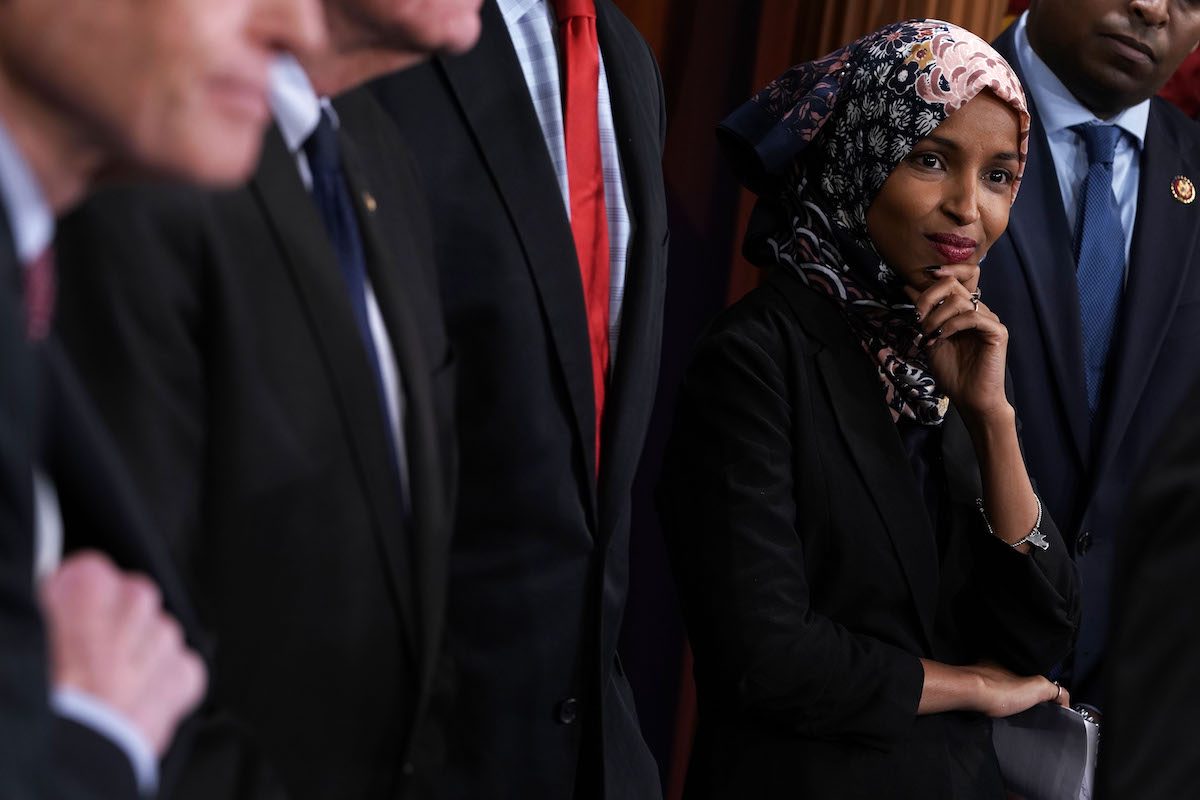 Over the weekend, a disgusting anti-Muslim poster featuring the face of freshman Congresswoman Ilhan Omar was displayed at an official GOP event in West Virginia. The poster shows a picture of the Twin Towers on September 11, 2001, with the words “‘Never forget,’ – You said” written over them. Below is a picture of Omar—one of the first two Muslim women and the first Somali-American elected to Congress—reading, “I am the proof – you have forgotten.”

The poster plays into so many hateful ideas—that all and any Muslims are responsible for 9/11, that all Muslims are dangerous, that they are unAmerican, and that they shouldn’t be allowed to serve in U.S. politics. And these bigoted stereotypes are being propagated at an officially sanctioned GOP event, inside the state capitol building. It was the inaugural WVGOP Day at the Capitol, titled, according to the official Facebook event page, “Republicans Take the Rotunda!”

The poster sat above pamphlets like “Readin’, Writin’, And Jihadin,′ The Islamization of American Public Schools” and “The Four Stages of Islamic Conquest.” Next to it was a sign for Act for America, an “anti-Muslim, pro-Trump” organization that the SPLC has designated an official hate group.

The booth caused an uproar in the Capitol, with a number of Democratic delegates condemning the anti-Muslim propaganda. Democratic Delegate Mike Caputo was so angry he kicked a door open, injuring a House doorman. Del. Mike Pushkin told the Washington Post that not one Republican delegate came forward to condemn the poster, though a number of them reportedly took the opportunity to talk about the importance of freedom of speech. The House of Delegates’ sergeant at arms, Anne Lieberman, reportedly said—out loud, in front of people—”All Muslims are terrorists.”

She resigned later that day.

By the next day, the state GOP had begun to distance itself from the booth, the poster, and Liberman’s words, releasing statements that the party “does not approve, condone, or support hate speech.” The incident has gotten little to no attention from the larger Republican Party.

No wonder why I am on the “Hitlist” of a domestic terrorist and “Assassinate Ilhan Omar” is written on my local gas stations.

Look no further, the GOP’s anti-Muslim display likening me to a terrorist rocks in state capitols and no one is condemning them! https://t.co/0ouCaloWqh

That tweet references court documents that have her listed as one of the planned targets of the recently arrested Coast Guard lieutenant/white supremacist terrorist, as well as a report from one of Omar’s consituents that the message “Assassinate Ilhan Omar” was found in a local gas station bathroom.

A number of Omar’s colleagues, especially her fellow freshman Democrats, have spoken out against the poster and its message.

When racism becomes acceptable on a partisan basis, and official GOP groups begin to use it to demonize communities, it puts real people in danger.@IlhanMN, I am sorry these threats are being targeted on you.

Praying for your safety. https://t.co/G6tCVHOEfS

Yet another display of racism by the GOP. I urge my colleagues to speak up & condemn this. @IlhanMN is being targeted just because of who she is. If folks stay quiet it will only continue.What does the silence say about us? We need political courage right now to help combat this. https://t.co/P48tamj88O

.@IlhanMN is a Member of Congress elected by the people of Minnesota. GOP leadership should immediately apologize for the outrageous racist attack on her that equates her with 9/11 terrorists. That is shameful. The picture below is the one Americans should know. pic.twitter.com/W6eSzMngVG

This comes at a time when Omar’s own party has remained noticeably silent on recent attacks that have called her antisemitic over comments she’s made about pro-Israel lobbying groups. (Update: They’ve apparently decided to replace silence with official censure.) Omar apologized last month for a tweet that many felt was dismissive of antisemitism and played into antisemitic tropes, but she has refused to back down from the issue of financial influence in politics.

A spokesperson for the congresswoman said in a statement, “As she said in her apology, we must distinguish between criticism of a particular faith and fair critiques of lobbying groups. She has consistently spoken out about the undue influence of lobbying groups for foreign interests of all kinds and her comments were about just that.”

I have not mischaracterized our relationship with Israel, I have questioned it and that has been clear from my end.

My Americanness is questioned by the President and the @GOP on a daily basis, yet my colleagues remain silent. I know what it means to be American and no one will ever tell me otherwise.