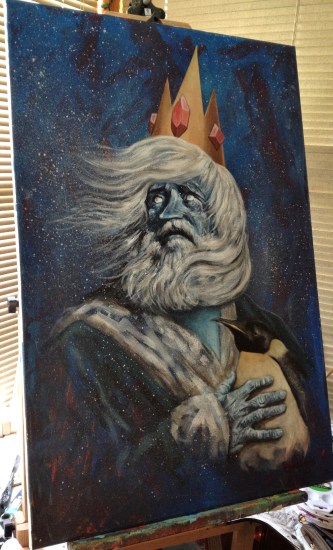 The Ice King’s journey from the caring human Simon Petrikov to an insane, lonely wizard with no memory of his past is possibly the most tragic aspect of Adventure Time, which we all know is surprisingly horrifying to begin with. Artist James Hance is no doubt aware of this fact, and created this painting, titled “I Remember You,” either to pay tribute to The Ice King’s story and his relationship with Marceline the Vampire Queen, or to make me want to cry at work. Tom Kenny, the voice of the Ice King, even weighed in on the portrait of Simon and penguin-companion Gunter, saying,

Mind blowing. This man is GOOD! This is kind of Adventure Time meets Clash of the Titans. “Release the penguin!”

Hance is auctioning off the painting on Ebay, and the current bid is $355, with almost a full 3 days to go before bidding closes.