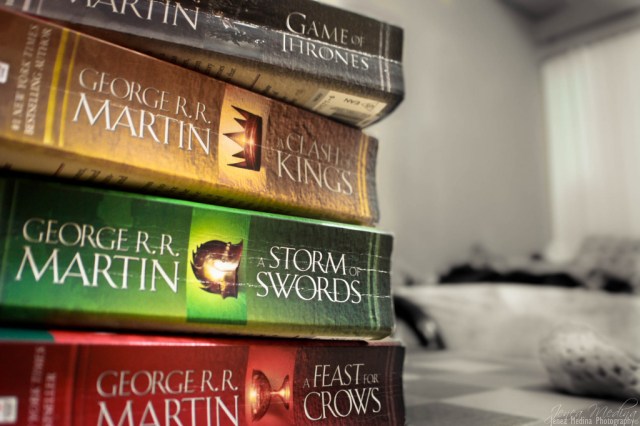 Fans of the long-running A Song of Ice and Fire series (those are the books that Game of Thrones is based on, if you didn’t know) were probably a little miffed when they heard that George R.R. Martin was working on a companion book called The World of Ice and Fire Encyclopedia instead of, you know, finishing the series. Well prepare to be more miffed (miffed-er?), because the release date has already been pushed back to 2014, and it’s now going to be a multi-volume “lushly illustrated retelling” of Westerosi history. Which, to be fair, sounds awesome, but we would have settled for an encyclopedia. Or The Winds of Winter. Whichever.

According to Martin’s publisher at HarperCollins UK, the fantasy author was expected to contribute about 50,000 words of material to the book alongside Westeros.org creators Linda Antonsson and Elio M. García. However, Martin reportedly ended up writing five times as much as he was supposed to, including some information not previously detailed in the books. They have since decided to shift the focus of the book away from its original encyclopedia format and commissioned more artwork for the final product, which accounts for the delay.

This isn’t the first time that George has extended a deadline because he’s written too much to fit in a single published work. The trilogy Martin originally planned in the early ’90s is now a seven-volume behemoth, and that number grows larger with every second that Martin writes. In fact, the reason that A Feast For Crows and A Dance with Dragons took so long to complete is because they were originally conceived of as one book, but the size of the original manuscript proved difficult for publishers to work with.

If this keeps up, George R.R. Martin is probably never going to stop writing. Like, ever. I’m a fan of the series and I’m not outright complaining, but… well, yes, I am. Don’t be afraid to kill your darlings, George! And by that I mean “pare down the amount of text you churn out,” not “heartlessly slaughter more of our favorite characters.” You do that already.

(via Tor image via Jenea Medina)