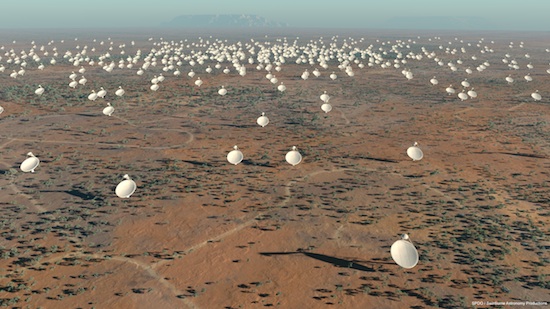 Once it’s built, the Square Kilometer Array (SKA) will be the world’s largest radio telescope and an enormously powerful tool to probe the furthest depths of the universe, allowing us to look back some 13 billion years. However, the SKA doesn’t even have a home yet and won’t be fully operational until 2024. Despite that, researchers are already concerned about the enormous quantity of data — double the daily output of the Internet — the telescope will produce each day. Enter IBM, the grand-daddy of computing power, to develop a solution.

According to IBM, all the data traffic across the world wide web amounts to half an exabyte of information. Once operational, the millions of antennas that will make up the massive SKA will be producing an entire exabyte of information that will need to be processed each day. What’s more, once that information is pulled in, the relevant data will need to be stored. The amount of data for storage is expected to be between 300 and 1,500 petabytes a year.

Unfortunately, IBM does not have an out-of-the box solution for the data storage and processing problems. To that end, the Netherlands Institute for Radio Astronomy (ASTRON) has signed a five year $32.9 million deal to begin developing technology that can meet these demands. ASTRON, which is part of an international group behind the SKA, wants IBM to essentially design for the future and combine numerous technologies into a single glorious solution.

With construction of the SKA in either Australia or South Africa slated to begin in 2016, it’s a race against time to build the infrastructure to make this telescope work. Given the enormous scale of the project, whatever solution IBM finally develops will probably be the first of its kind. Considering that businesses and even everyday users are demading more and more from their computers as our world becomes more and more data-rich, it surely won’t be the last. Who knows? A small piece of the technology that makes the SKA tick might end up in a future laptop, or smartphone.

(IBM via Gizmodo, image via Wiki)