IBM Can Store a Bit of Information in Just 12 Atoms 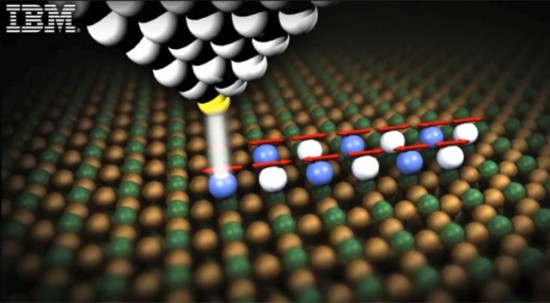 Instead of attempting to shrink down existing forms of data storage, IBM took a gamble and started experimenting with building storage from the bottom up; it paid off. IBM has now figured out a way to store one bit of data in a mere twelve atoms, creating a form of data storage 2 orders of magnitude denser than some forms of conventional storage.

The research was lead by Andreas Heinrich of IBM Research Almaden who was tasked with the challenge of circumventing Moore’s law. For the unfamiliar, Moore’s law is an explanation of the rate at which computer technology gets exponentially denser with each iteration as researchers figure out clever new ways to pack things in even tighter. The idea is that this will continue to occur until somebody hits the atomic scale. Heinrich and co. decided to try and head Moore’s law off at the pass, and it looks like they’ve pulled it off.

Now, as impressively small as this storage is, there are — of course — a bunch of things that limit its practical use, at least for the moment. First of all, for the time being, these 12 atom bits are created, manipulated, and read with a Scanning Tunneling Microscope. Scanning Tunneling Microscopes, if you are not aware, are about the size of a room and don’t come cheap. Of course, you wouldn’t necessarily need to use an STM to create and manipulate these 12 atom bits if you could find a way to manufacture copper plates with iron atoms arranged just so. No one’s quite figured this out yet, but now there’s a good reason to try.

All that being said, most huge advances in technology are theoritcal when they first happen. By jumping straight to the atom instead of trying to merely improve current storage, we got to jump down about 2 orders of magantude. The price you pay for that is not being able to actually use the thing yet. Still, this technology will doubtlessly be vital as we start edging up on atomic limits and start creating the smallest, best computers we can make without going quantum.