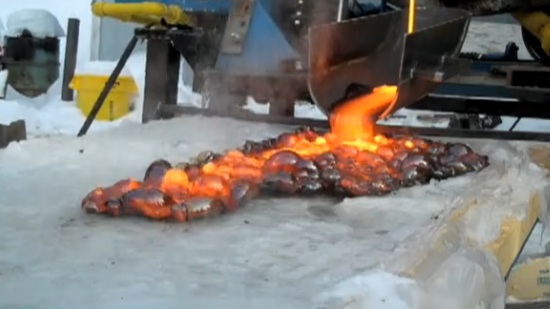 In a stirring reminder of what art and science can do when they put their minds together, faculty from the art and geology departments at Syracuse University have joined forces to make a DIY lava flow in one of the school’s parking lots. The picture above is not an artistic exploration of the nature of molten rock, or a very convincing substitute that helps students better understand the nature of a geological phenomenon that isn’t often seen in upstate New York. No siree, that is honest-to-goodness homemade molten basalt right there. Hit the jump for more info on the project and a video of the homemade lava flow in action.

When art professor Bob Wysocki and geologist Jeff Karson decided to put together the Syracuse University Lava Project (SULP), nothing but the real thing would do. The pair collaborated to build a coke-fired furnace that could melt basalt. That got them the closest you can be to real lava without being in Hawaii or starring in Dante’s Peak. Then they hauled it out to the parking lot and got some lava flows going, because once you have a furnace that melts rock, what else would you even do with your day?

The lava flow is a boon for geology students at the school, allowing them to study lava flows and the dynamics of vulcanism without leaving their own less-than-geologically-active backyard. SULP isn’t solely an academic endeavor, though — after all, geologists aren’t the only ones who think lava is amazing. Once you are making homemade lava, it is in kind of poor taste to keep something that awesome to yourself. DIY lava should be shared with the world, and that is just what Karson and Wysocki do — whatever small corners of the world can fit in the parking lot of SU’s Comstock Art Building, anyhow.

That’s where the professors and their students stage public demonstrations of lava flows for the general public, hoping to get people amped up about science using the power of superheated rock that flows like a river of living doom. If there’s a better way to get the general public interested in science, we have yet to hear it.

(via Ars Technica, video via Robert Wysocki on Vimeo)