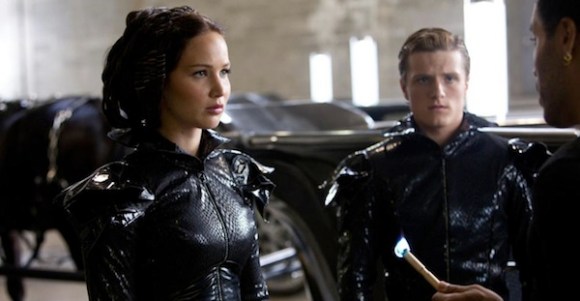 Considering how The Hunger Games was already setting records and selling tons of tickets before it had even opened, it is not exactly a shock that the Lionsgate flick is now setting box office records after finally hitting theaters after all this nail-biting anticipation. But we didn’t have to tell you guys that this movie was going to be huge. After all, a lot of you were probably responsible for all those pre-sale tickets, weren’t you? We don’t blame you. Just finding a parking spot last night was like a trip to the arena, save for the makeover and waxing.

Box Office Mojo had been predicting big numbers for the adaptation of Suzanne Collins‘ best-selling novel (which are setting records for Kindle sales all by themselves), and since the movie opened up at midnight last week, the numbers have been pouring in. Before we had those numbers, though, the site was predicting a $135 million opening weekend — right now, the site is guessing more like $155,000:

That’s considering how many screens will be showing the movie — 10,000 in 4,137 theaters — and that will place The Hunger Games right up there among other box office behemoths like The Dark Knight and Harry Potter and the Deathly Hallows: Part 2. Following just its midnight premiere, it had made $19.74 million, ranking seventh behind Harry Potter and Twilight movies, and giving it the best midnight showing for a non-sequel. (And, for those keeping score, beating the first Twilight movie by almost three times the $7 million that movie made after its midnight premiere.) Its total for the entire day on Friday was $68.25 million, making it the fifth largest opening day ever, the best for a non-sequel, besting Alice in Wonderland.

As for opening weekends, the movie it’s looking to knock out of the arena is still Alice in Wonderland, the current record-holder for a non-sequel with a $116 million weekend total. And it looks like it might just blow that out of the water, also setting a record for the most successful March opening.

Something helping The Hunger Games besides its built-in book-reading audience: very positive reviews. People are excited about this movie because it’s not just another tween franchise — it’s appealing to a much bigger audience, and it is a well-made movie. Right now, it’s rating an 86 percent “fresh rating” by critics on Rotten Tomatoes, as well as a 95 percent “fresh” rating by moviegoers. So, expect word of mouth to carry this movie into even bigger numbers going into next week.

In case you missed it, or you are simply not convinced, or you just depend on The Mary Sue for reviews (which is very kind of you), here is our review of The Hunger Games.