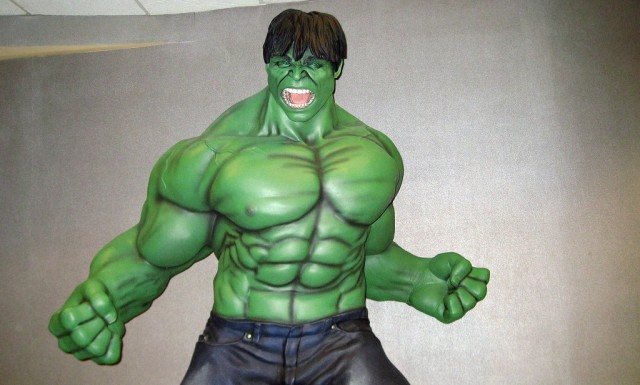 If there’s a better use of crowdfunding sites like Indiegogo than getting the Northlake Public Library a nine-foot-tall statue of The Hulk, we don’t know what that use is. The librarians of Northlake have big plans, and those plans involve a giant Hulk statue, and helping people read and create more comic books. They also have one of the most awkward campaign videos we’ve ever seen.

It might not seem like helping a library in Northlake, Illinois get a giant Hulk statue will benefit you unless you’re a resident of Northlake, but just think about how much better the world would be if all libraries had giant superhero statues in them. This could be the start of a pretty amazing trend.

Besides, the Indiegogo campaign is seeking more than just the statue. They also want to add a lab where patrons can create their own comics, and are even looking to install a 3D printer. They basically want to become the geekiest library in the country, and we think that’s worth celebrating. They want to do this so bad they made this video, and you can tell by the fact that every person in it looks more uncomfortable on camera than the last, it wasn’t easy for them to do:

If the hope of a brighter tomorrow isn’t enough to get you to contribute, Northlake promises to send any book to any other library in the country, and for $10 you get a Hulk library card. If you’re willing to kick in a little more, you can even have your name engraved on the Hulk statue’s plaque, or put in a book at the library. They’ll even send you some comics.

So, yeah, this seems legit.

(via Indiegogo, image via Mrs. Gemstone)