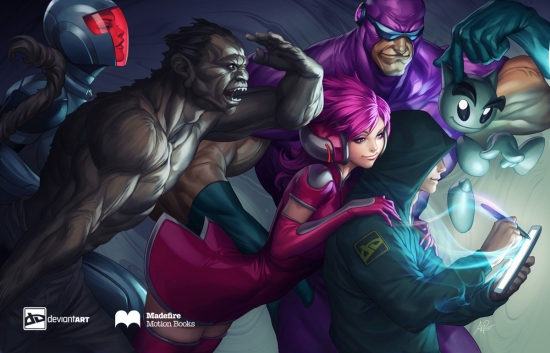 Digital comics are great, but largely they’re just stagnant images of pages of a print book. Not that there’s anything wrong with traditional comics, but there’s just more potential with digital formatting. To help artists harness that potential Madefire has created a Motion Book Tool to bring sequential art to life, and DeviantArt just teamed up with them to let its users create vibrate motion comics.

The move is similar to one by digital comics giant ComiXology last month that lets artists self-publish on their digital platform. The difference is that while ComiXology automatically converts work into a motion comic, Madefire gives DeviantArt users the tools to do it themselves. That can be a benefit to people who want control over every step of the process, but might be less of a boon to someone who would rather have someone else tackle the job.

The Madefire tool is about as complex as Keynote or PowerPoint says founder Ben Wolstenholme. Neither of those programs are terribly difficult to use, just think of all the terrible PowerPoint presentations you’ve sat through, and it might have you question the kinds of motion comics we’re going to be seeing. Although you’ve probably never sat through a PowerPoint presentation by a DeviantArt contributor. Those would probably be pretty interesting.

Right now DeviantArt users can apply to use the Madefire browser app, and then in two months the first round of users with finished books will be eligible to use the publishing tools to sell their work. This is another difference with the ComiXology platform which splits profits evenly with creators. The Madefire/DeviantArt deal hasn’t specified the numbers for sharing profits with creators, but DeviantArt users who sell through the site can expect to see just 20% of the sale price according to their help section.

That deal is based around selling physical prints of work, so it could stand to be drastically different when it comes to digital comics. Time will tell. We’ll also have to wait and see what kind of work the DeviantArt community puts out with these new tools, but we can already preview 12 motion books created by Madefire.