Over 90,000 Copies Of IDW’s My Little Pony Comic Book Have Been Pre-Ordered 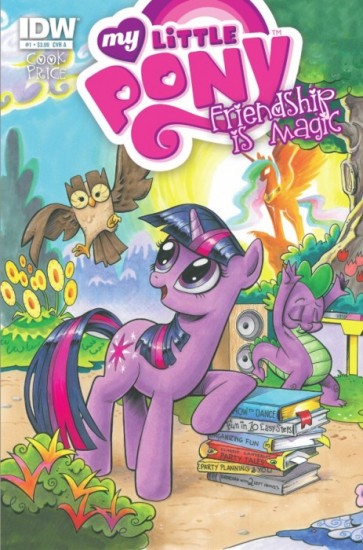 I’m pretty sure everyone at IDW Publishing knew they had a hit on their hands when they picked up the rights to publish My Little Pony: Friendship is Magic comic books from Hasbro, but the suspicion has now been confirmed. Advance orders for the first issue from Katie Cook and Andy Price are sitting around 90,000 copies.

90,100 to be more exact. Bleeding Cool reported the numbers which IDW later tweeted to confirm.

This is pretty exciting for a few reasons. Firstly, it’s an awesome win for Cook who is a delightful artist and creator of the webcomic Gronk. You probably also know her work on Archaia’s Fraggle Rock title as well as her Star Wars art (Her Universe will be giving out Cook’s new Halloween tote at our NYCC party tonight!)

I have a comic book that I wrote that outsold Uncanny X-Men. So I can say that now. #MLP1

Comic sales one-up each other often but for an all-ages book to do this is a pretty big deal.

The first issue has a few varient covers plus a box set of all six, which also helped that number but MLP fans being who they are, I would be surprised to see a second printing announced very soon. Price is doing the main artist duties on the title while Jill Thompson (Sandman, Beasts of Burden), Stephanie Buscema (Womanthology), and others will do special covers.

The issue goes on sale at comic shops and digitally (something not included in these numbers of course) November 28.