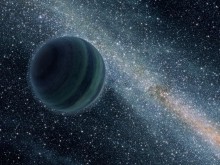 A recent survey uncovered a startling number of so-called “nomad planets,” planets that don’t orbit a star. The number of these wandering worlds suggested to researchers that they might, in fact, be more plentiful than stars. Now, a new study sought to find the upper limit to the number of nomad planets that could exist in our galaxy. They’ve pegged their figures to be no more than 100,000 nomad planets for each star.

Louis Strigari, the lead author of the survey, told the Universe Today of this astonishing number: “It kind of quantifies our ignorance, you could say.” By this, he means that while the theory behind his work is sound, the number produced is the maximum number of possible planets. In short, the number is based off what we do know. Unfortunately, there’s a lot more that we don’t know, and a key part of our ignorance is that we don’t have as clear a picture of how planets actually form.

“What we did was we put together the observations of what the galaxy is made of, what kind of elements it has, as well as how much mass there could possibly be that has been deduced from the gravitational pull from the stars we observed,” […] “There are a couple of general bounds we used: you can’t have more nomads in the galaxy than the matter we observe, as well as you probably can’t have more than the amount of so called heavy elements than we observe in the galaxy (anything greater that helium on the periodic table).”

As we learn more about how planets form, and conduct more surveys of nomad planets, more constraints could be placed upon Strigari’s findings. It’s hoped that eventually the number will drop down to something that more accurately reflects reality rather than, as Strigari says, our own ignorance.

Interestingly, Strigari is also quoted by Stanford University as commenting on a tantalizing subject: The possibility of life on a nomad world. He notes that while these planets don’t have the benefit of a star to warm them, radioactive decay or tectonic activity could keep the planets adequately heated. He says:

“If any of these nomad planets are big enough to have a thick atmosphere, they could have trapped enough heat for bacterial life to exist.”

If his study alone wasn’t enough to shake things up, that comment should do nicely.