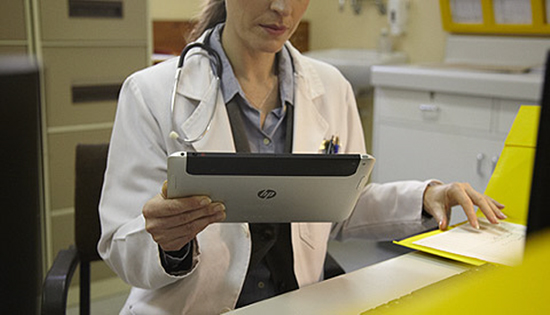 With the launch of Windows 8 later this year, a series of tablets are also set to come to market utilizing Windows RT — the version of the software specifically for tablet devices. The Microsoft Surface is the most prevalent of the announced tablets, garnering many comparisons to Apple’s iPad. They aren’t the only game in town, however. Hewlett-Packard has quietly been teasing images of an unannounced tablet, which almost certainly runs Windows 8, in their ads.

HP has previously confirmed that their first tablet will be focusing on the business sector, and it’s clear from the images and copy in the ads that this is most certainly the case. They’ve also previously said their Windows 8 tablet would run the x86 architecture to provide more power to those who need it most. So, we’ve known a tablet would be coming and the kind of software it would be running, but everything else has been up in the air.

Cue HP running a series of advertisements that show off what appears to be a sleek new tablet with the proper dimensions for a Windows 8 display without actually announcing anything. Purely from the imagery, one can make out a camera and headphone jack. This isn’t exactly mind-blowing news, as these features are considered old hat in today’s tech world. Until such a time as the company actually deigns to acknowledge the wild speculation with specifics, people will cling to these insignificant discoveries.

Ultimately, anything that helps bring companies that are traditionally mired in old filing systems to the modern age is a plus in our book. If it turns out that this is the confirmed enterprise tablet, one can only hope that it doesn’t infringe too badly on any of Apple’s patents. That never goes well.

(HP via The Verge)