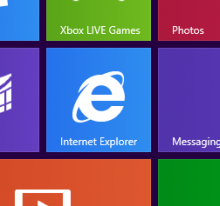 Everybody talks trash about Internet Explorer. It’s just what you do. And yes, Internet Explorer might not be quite as bad as it used to be, but you’d still be hard pressed to find a loyal fan. Those of us who are loyal fans of other browsers might have something to start worrying about. Windows RT, the ARM version of Windows 8 designed for use on tablets, effectively cripples all third-party browsers, and will force hapless users to go crawling back to IE whether they want to or not. Unsurprisingly, Google and Mozilla are less than pleased, and are making their opinions known.

Here’s the skinny: If you want to make an app that can be used on Windows RT, you have to distribute it through the Windows Store. If you want your app to be deliverable through the Windows Store, it can only use Windows RT code and none of the more robust APIs that you can use in the desktop environments. This means any third-party browers that want in on Window 8 tablets are going to be restricted to straight Windows RT code. Following?

The problem, as you might be able to guess, is that Internet Explorer gets a pass; Internet Explorer will be able to get the kind of deep OS integration that pure Windows RT code won’t allow. In short, the way things are now, Internet Explorer will be the best performing browser on Windows 8 tablets because it will be the only one with access to all of the tools a browser needs. Chrome and Firefox, on the otherhand, would have to develop apps using only the neutered Windows RT code, and will be worse for the wear as a result.

Naturally, both companies see this as a dangerous, non-competitive move. Mozilla has said these restrictions herald “an unwelcome return to the digital dark ages” in a blog post on the subject. Meanwhile, Google has said it “[shares] the concerns Mozilla has raised regarding the Windows 8 environment restricting user choice and innovation” in an emailed statement on the subject.

Fortunately Windows 8 isn’t finished yet, so these restrictions are not set in stone, but they do not bode well for third-party browsers at the moment. Microsoft still has the opportunity to clear the air on the subject or offer a fix, and it’ll be interesting to see how they take it. When it comes to forcing products that are widely considered to be inferior while locking out competition, Microsoft already has some experience with Bing on the Xbox. Whether they can pull off the same trick with Windows 8 remains to be seen.