How to Keep From Seeing Spoilers 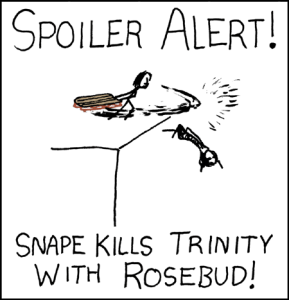 Stay off Tumblr. At least, that’s how my friends who follow tumblogs about their favorite ongoing television shows manage it. New Sherlock mini this Friday? Whelp, better stay of Tumblr all weekend. Won’t be home to watch Doctor Who until next week? Better steer clear of Twitter for a while. Looking for a clip of a major Game of Thrones character on YouTube but have only watched the series? Better not look at the comments.

LifeHacker, however, offers several solutions to these problems, mostly through the use of browser addons that will exclude posts with certain tags from showing up in the feed of your favorite social networking or microblogging site.

For YouTube Comments (which might be a welcome excision from your daily routine regardless of whether you are particularly worried about spoilers or not), LifeHacker recommends No YouTube Comments for Chrome and YouTube Comment Snob for Firefox. For Twitter, you’ll want to either be using a specific Twitter app like TweetDeck, where the options to filter out tweets containing certain bits of text is found under Settings > Global Filter; or be using Chrome, which offers the Proxlet extension. Otherwise, there’s DeClutter, a bit of javascript that works in any browser, but only when you’re looking at Twitter through that browser. Set up a list of words you never want to see on Twitter, and it will do the rest of the work.

And for Tumblr, the land that explodes for every new emotionally draining plot twist that Stephen Moffat can throw at it, there’s TumblrSavior, available for Chrome, Safari, Opera, and Firefox (with Greasemonkey installed) which allows you to create a list of tags to exclude from your dashboard, so you can still follow all your favorite blogs the weekend that Doctor Who premieres and it’s your housemate’s turn to watch It’s Me Or the Dog, or  that great new blog that’s just started posting this intense Venture Bros. kick and you’re only halfway through season two.

LifeHacker lists even more solutions for those who want a bit more filtering in their internet lives, so you couldn’t go wrong by giving the whole article a read.

(story via Being Geek Chic, picture via xkcd.)