A Lesson In Illustrating Wheelchairs From Someone Who Uses One Not too long ago I asked a famous comic book artist to draw me a picture of Oracle and what I got was not at all what I expected. Barbara Gordon was depicted in a hospital wheelchair with a blanket over her legs, certainly not the Oracle I know. “How could big name-so-and-so not know how to draw someone in a wheelchair?” I said to myself but then I thought, “Probably because they aren’t in one.” That’s just one possible scenario of course, there are plenty of artists out there (like Adam Hughes above) who get it right. But if there’s a problem we all suffer from at times it’s ignorance. Yes…all of us. Some more than others of course but even the most learned of us could do with a bit of education now and then and that’s my goal today.

It’s certainly not meant as a dig, but through the years, it’s become obvious to me that a lot of people are oblivious to the every day lives of people with disabilities (PWD). And that’s why awareness and education are important. It’s not that people don’t care (although some might not), it’s that they truly don’t know what’s appropriate in certain situations. Read on for a few examples of different types of wheelchairs, as well as those who use them, plus some commentary by a creator and an actor who are close to the topic at hand. 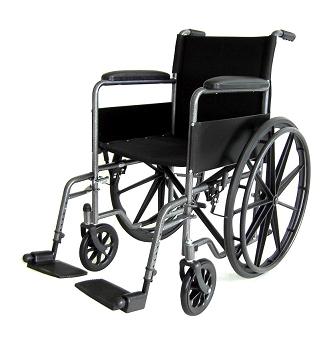 This is a normal, manual wheelchair, also sometimes called a transport wheelchair. Why? Because its purpose is to transport people, it’s utilitarian. They use these in hospitals to get patients who can’t, or shouldn’t be, walking from one place to the next. A person who was permanently disabled would most likely not be using this kind of wheelchair yet I often see comic artists depict characters, Oracle for instance, in this type of chair when she should be in one that looks like this. 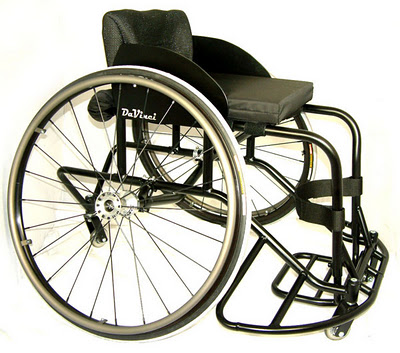 The difference? This is an easily maneuverable, easy to transport wheelchair. And no, it doesn’t have handles because people who use them usually like (and can) get themselves where they need to go without help. So why don’t we see this type of wheelchair depicted more often, for the characters who would use them, in comics? I asked DC writer Gail Simone, who’s written the character of Oracle often.

Simone said they always strived to be accurate but that sometimes mistakes happen. “We normally took care about the design of the chair in the earlier Birds of Prey issues, but sometimes, an issue might have a fill-in artist, and in some cases, the chair designs in those issues were occasionally downright archaic,” she said. “You can’t really blame that on the artist, it’s more my fault for not providing proper reference, or if I wasn’t aware a fill-in artist was being used, then the editor should have provided reference.”

Still, the fact remains, a good number of artists don’t already have this type of information on hand and that’s one of the reasons I decided to write this piece. However, Simone told me she was always listening to fans for advice and direction.

“Most of the comments we got from PWD were very positive, but the depiction of the chair needed updating and they let me know on the net and at conventions, for which I was very grateful. It was never angry, they just wanted such an important aspect to be handled correctly, and they were dead right. Specifically, it was pointed out that Barbara, a tech wizard, would be using a lighter, more maneuverable chair,” she said. “So on the second volume of Birds of Prey, I put the question out there to both chair users and health care professionals, what kind of chair would Barbara feel most useful and appropriate. And we got a stunning amount of response, which we were incorporating directly into the book, when it was unfortunately canceled for the big relaunch.” 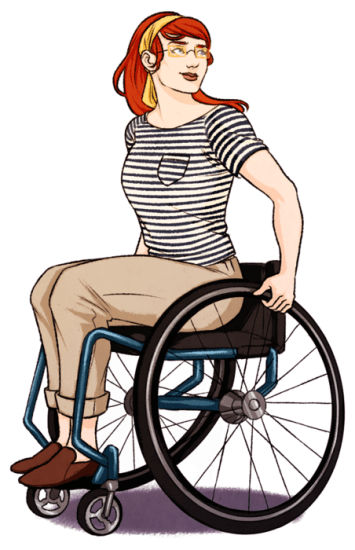 Here’s artist Yasmin Liang‘s depiction of Barbara Gordon as Oracle. Liang said she looked to Google for reference but wrote, “I was terrified of putting Barbara in the wrong kind of wheelchair (I’m still quite sure all I’ve done is draw something vaguely alluding to one).” Actually, she did a pretty great job considering this is how someone with a spinal cord injury, similar to Barbara, looks in their chair. That’s Teal Sherer, Venom from The Guild, who told me she has the same frustrations as an actress when seeing wheelchair on screen. “I was flipping TV channels the other night and came upon this awful Hallmark movie called After the Fall,” she said. “It’s about this young woman who is a competitive show jumper and falls off her horse and becomes paralyzed.  They put her in this clunky, medical looking wheelchair which drove me nuts. It’s so false. In reality she’d be in a wheelchair that was similar to mine. Do your research producers!” The actress playing the starring role was not a wheelchair user in real life; having a consultant on set would certainly have directed them to the reality of the situation. Sherer is currently working on a comedic web series called My Gimpy Life, that will be based on her adventures as a woman in a wheelchair in Hollywood and hopefully clue a few people in on what things are really like. 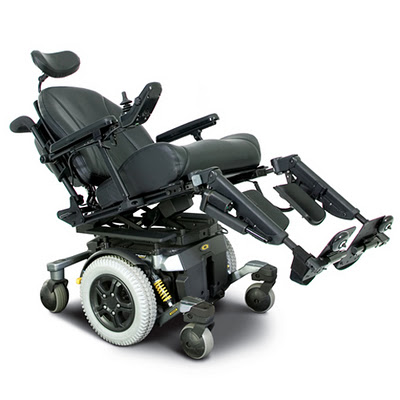 Here we have a motorized, or power chair. It’s something someone who has limited mobility or muscle function would use and like other chairs, can feature any number of extra pieces to conform to the needs of the individual. It’s similar to the kind of chair theoretical physicist, cosmologist, and author Stephen Hawking utilizes. Hawking has amyotrophic lateral sclerosis (a neurological disorder that falls under the Muscular Dystrophy Association’s purview), also known as Lou Gehrig’s disease. May is ALS Awareness Month and a great opportunity to learn more. The important thing to remember is who you’re drawing for. What limitations does the character have? What can they do? Even if a character’s condition is similar to another’s, they may require a completely different set-up for their adaptive device.

For instance, while ALS is very similar to muscular dystrophy, the diseases path may take a very different journey and require different care. I have a type of muscular dystrophy called Spinal Muscular Atrophy. It’s also a neurological disorder but affects me much differently than ALS affects Hawking. This is the kind of wheelchair I use every day. The term for my particular wheelchair is a power scooter but my friends have been known to call it a go kart, while I affectionately call it the Batcycle. Power scooters tend to be used by the elderly than anyone else but I don’t care because it’s totally cool.

And here’s what a scooter looks like in comic form. 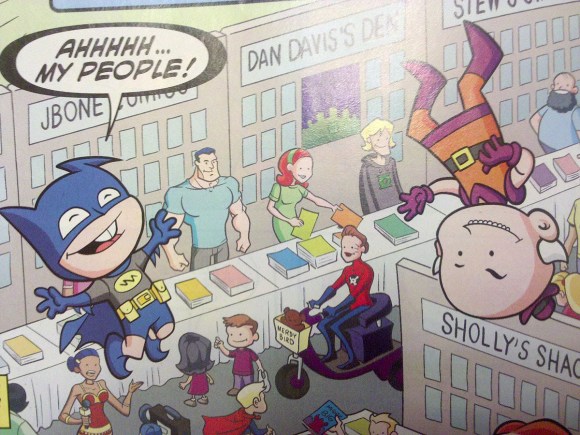 Stewart McKenny illustrated me into an issue of Super Friends at DC Comics and did a pretty great job with my scooter even though he and I live on separate continents.

There’s room for variation of course. People with the exact same conditions may not use the same equipment or even use the same equipment all the time. It’s whatever works best fo for the individual. I have a manual wheelchair I take with me if I’m traveling and know the scooter is going to face obstacles. It does have handle bars because I don’t have enough strength in my arms to push myself for extended periods of time. 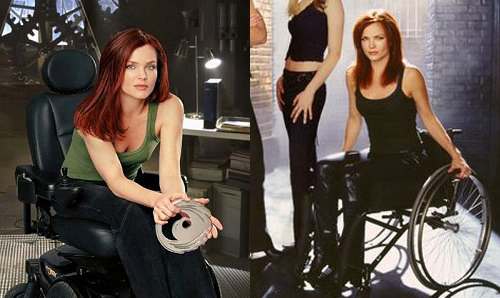 Google image search is a huge resource for reference material, I found an abundance while looking for items for this article. But here are a few good links for both writers and artists to bookmark:

Like I said earlier, this isn’t a dig at artists or their methods, just an attempt at opening some eyes. It’s easy to be oblivious when something isn’t staring you in the face. Believe me, I’ve asked enough people, friends and strangers, if there was a step into a building and had them respond, “You know, I’m not sure,” to realize these issues aren’t relavent to everyone. But that doesn’t mean they should be ignored.

There’s not a lot of disabled characters in comics but it might not be that way forever and those printed on the pages now deserve to be portrayed as accurately as possible. Simone made sure to tell me she, as someone who is very aware of PWD, knows they can always do more. “Looking back at any work, I tend to focus on what we could have done better, like a lot of writers,” she said. “While I think Barbara was a brilliant example of a kickass PWD character, we definitely could have and should have presented her chair as more modern much earlier in the run.”

Although I’m disabled, I’m not the authority on the disabled of the world. I don’t claim to know all and I can only share what I personally know and see. Even I don’t get it right all of the time, so I understand how easy it is to make mistakes. The number one thing to remember is – people in wheelchairs are exactly like you, except they’re sitting. Seriously. We may have to do more to get ourselves ready and out to work in the morning but we’re just regular people living our lives. All of the wheelchairs I showed you may have similar components but they are not the same, just as people have different personalities, so do wheelchairs! (My old high school buddies will tell you stories of all the smiley face stickers I had on my old one.) Keep in mind who is using the wheelchair, do some research to find out what type they would use, and you’ll go a long way to making not just PWD proud but educating everyone else at the same time.