No Really, How Does Postmaster General Louis DeJoy Still Have a Job? 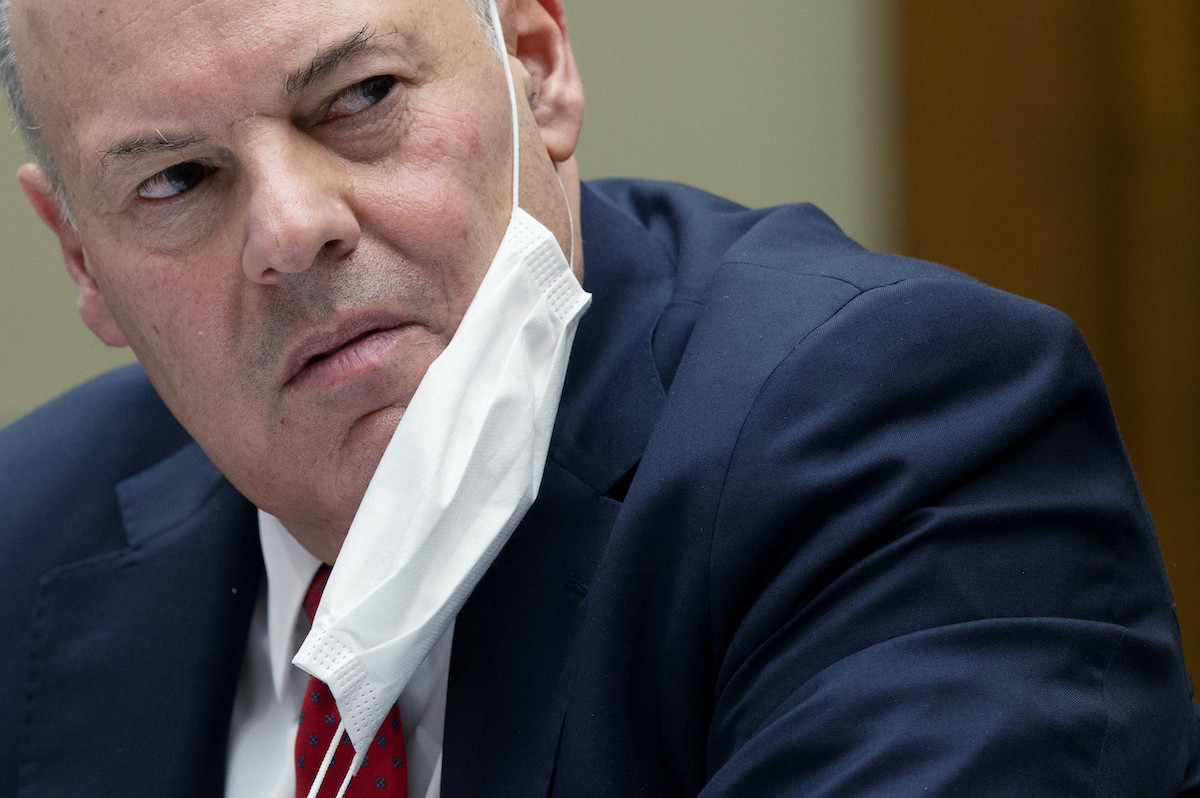 Postmaster General Louis DeJoy testified in front of Congress Wednesday, where he declared that he had absolutely no plans to resign. When asked how long he planned to stay in office, DeJoy answered, “A long time,” telling lawmakers, “Get used to me.”

No one should have to get used to DeJoy, though, since it’s been under his tenure that the United States Postal Service has seen a (reportedly deliberate) massive slowdown of mail deliveries. This affects everything from the regular packages we’ve all been flooding ourselves with in an attempt to ease the emotional pain of spending a year inside, to much more critical deliveries like paychecks, social security checks, and prescription medications.

Plus, there is a mountain of credible evidence leading to accusations that DeJoy—a major Trump donor—put that slowdown in motion in order to hinder the accessibility of mail-in voting ahead of the November election.

So no, we don’t want to “get used to” DeJoy. Unfortunately, Joe Biden can’t just replace him. He has to be voted out by the USPS Board of Governors. The good news is that Biden just nominated three new members to the board’s nine-seat panel, which would give Democratic appointees the necessary majority.

DeJoy had to face the House Oversight Committee Wednesday to answer for the issues the post office is facing under his control. Here were some highlights:

Back in August, Rep. Katie Porter stumped DeJoy with some incredibly basic questions about how the mail works—questions like “How much does it cost to send a postcard?” He couldn’t answer. On Wednesday, she stumped him again by asking him what it is within the mail system that he cares about? He didn’t have an answer.

Yet, Postmaster General DeJoy *laughed* when I asked him what work he values most.

Let’s educate him. How does your family depend on @USPS? pic.twitter.com/2ggn02MCUj

In talking about his vision for the future of the post office, DeJoy suggested that a lot of the issues they’d been facing this year won’t be fixed but rather, accepted as the new normal.

Rep. Jamie Raskin pushed back against that. “It sounds like your solution to the problems you’ve identified is just surrender,” he said. “You’re basically saying because the mail has been late under your leadership, we’re just going to change the standards and build it into the system.”

No one had better questions than Rep. Cori Bush, though, who asked DeJoy his thoughts on the demographic makeup of the USPS Board of Governors, which, as she very accurately put it, “looks like a millionaire white boys club.”

“Do you see it as a problem that the Board of Governors of the United States Postal Service looks like a millionaire white boys club?” pic.twitter.com/Qt1z6PZhKQ

I mean, she’s not wrong. And one of these guys is literally named “Zollars.” A real man of the people!

DeJoy tried to argue that the demographic makeup of the board was due to the vacancies, as if it’s always been a bastion of diversity before this. And it is true that over the years, some white women millionaires have been let into that club and until recently, the Deputy Postmaster General was Ron Stroman, a Black man. But he left specifically because of DeJoy, so don’t think DeJoy’d defense is as strong as he might hope it is.

Stroman is on Biden’s list of nominees, along with Anton Hajjar and Amber McReynolds—an expert in mail-in voting—to the board.