DeJoy, a Trump donor, has been systematically dismantling the USPS. 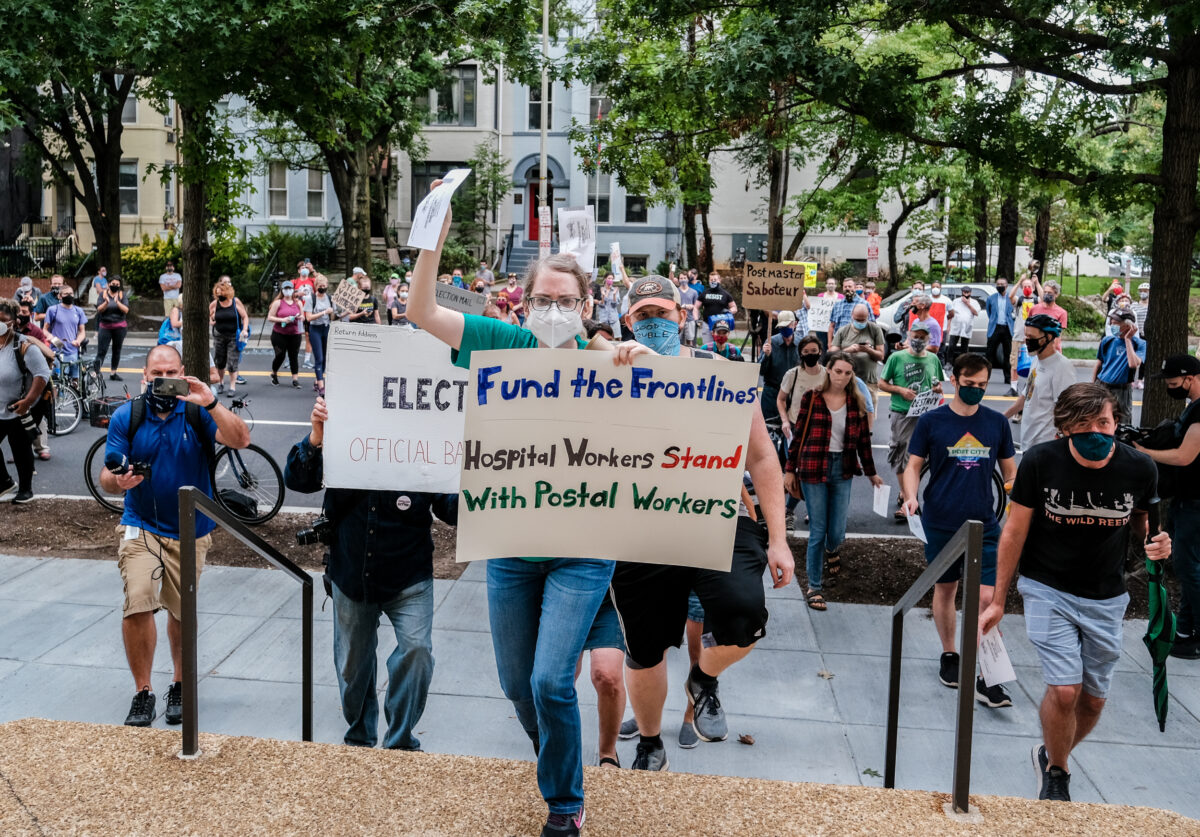 A group of protesters have gathered outside the condo of Postmaster General Louis DeJoy to demand that he stop dismantling the United States Postal Service. In one of the most blatantly authoritarian moves of his presidency, Donald Trump and his cronies are systematically sabotaging the USPS in an effort to suppress voting by mail. The protest took the form of a “noise demonstration”, with activists banging pots and pans, ringing bells, and sounding air horns to create a cacophony of sound:

Outside the postmaster general’s house early this morning!! pic.twitter.com/dzDC4V2dPo

The group released a statement saying, “Louis DeJoy, one of Donald Trump’s big donors, is dismantling the U.S. Postal Service ahead of mass mail-in voting in the 2020 presidential election.” Since his appointment to the position in May, Postmaster General Louis DeJoy is following through on Trump’s threats. A major Trump donor, DeJoy also owns stock in USPS rivals, creating a massive conflict of interest.

DeJoy has lead the charge on removing 671 mail sorting machines used to sort mail quickly. He has also eliminated overtime for USPS employees, leading to massive delays in mail sorting and delivery. These delays could have devastating ramifications for the election, which will see a massive number of mail-in ballots thanks to the COVID-19 pandemic. In addition, dozens of USPS drop boxes have been removed in states across the country.

Mark Dimondstein, the president of the American Post Workers Union, called DeJoy’s policies “demoralizing and upsetting”. He added, “obviously if the postal management is putting in policies to slow down the mail, then that has an impact on everything, including ballots … The states run elections, not the Postal Service. But the Postal Service is here to move those ballots. And when mail gets slowed down, it becomes a concern everywhere.”

Photo taken in Wisconsin. This is happening right before our eyes. They are sabotaging USPS to sabotage vote by mail. This is massive voter suppression and part of their plan to steal the election. pic.twitter.com/QXLWGIHTrz

As his poll numbers continue to drag, Trump has realized that the only way he can win re-election is by sabotaging the post office, dealing a major blow to vote by mail. Never mind that Trump and his wife are voting by mail in their new home state of Florida, the president continues to rant against mail-in voting.

And since he’s never one for subtlety, Trump has blatantly announced his plan to the public. “They need that money in order to have the post office work so it can take all of these millions and millions of ballots,” Trump said in an interview with Fox Business’s Maria Bartiromo. “If they don’t get those two items, that means you can’t have universal mail-in voting because they’re not equipped to have it.”

In response, the internal watchdog at the USPS has opened an investigation into DeJoy’s policies and his conflicts of interest. Massachusetts Sen. Elizabeth Warren and several other high ranking democrats requested the investigation via a letter, which read, “Given the ongoing concerns about the adverse impacts of Trump Administration policies on the quality and efficiency of the Postal Service, we ask that you conduct an audit of all operational changes put in place by Mr. DeJoy and other Trump Administration officials in 2020.”

Earlier this week, I called on the Inspector General to investigate the disruptive changes made to the Postal Service under Louis DeJoy. Now, that review is happening—and we must keep up the pressure until we get answers.https://t.co/Ij3Na3sMWO

Meanwhile, Republicans are staying quiet and letting Trump destroy the the institution of the USPS. Only Sen. Mitt Romney has spoken up, saying “We have got to preserve the principle of democracy or the trend we’re on is going to continue to get worse.”

This blatant corruption is yet another reminder to not only register to vote, but to make a plan to vote early and safely. Our democracy literally depends on it.