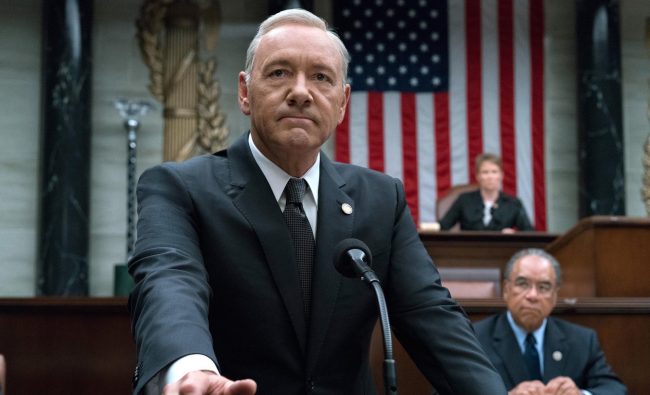 A common challenge I’ve been seeing pop up about several of the numerous men being accused of sexual harassment lately is “Should we continue to punish someone for a mistake they made years ago?” Considering the recent allegations against actor Kevin Spacey from employees on his most current project, the answer seems to be yes.

It started with Star Trek: Discovery‘s Anthony Rapp coming forward, about an incident in which Spacey, then in his mid-twenties, tried to have sex with Rapp when he was only 14. Then more allegations, these from Spacey’s 12-year tenure across the pond as the Artistic Director of the Old Vic Theatre.

Today, we hear that eight employees on Netflix’s House of Cards, all of whom have come forward anonymously out of fear of reprisal, have accused Spacey of inappropriate and abusive sexual behavior on set. As reported by People, “They all alleged […] that Spacey displayed ‘predatory’ behavior on the set of the Netflix show, touching employees without consent and making lewd comments towards staffers who were usually young men.”

“I have no doubt that this type of predatory behavior was routine for him,” he says. “And that my experience was one of many and that Kevin had few if any qualms about exploiting his status and position. It was a toxic environment for young men who had to interact with him at all in the crew, cast, background actors.”

When asked about what happened next after the assault, the production assistant says, “I was in a state of shock. He was a man in a very powerful position on the show and I was someone very low on the totem pole and on the food chain there.”

This is why it’s important, no matter when the allegations are from, that we listen and believe victims when they come forward. No matter how “minor” the harassment seems, even if it doesn’t cross the line into assault. Because it’s rarely just one incident.

You don’t sexually harass someone one time just to try it out and then never think to do it again. If you’re the kind of person who doesn’t think twice about making a lewd comment to someone at work in an attempt at “flirting,” or who’d grope someone’s ass, you’d do it again.  The first allegation usually indicates a pattern of behavior that always comes to light.

And it’s the pattern of behavior that should concern us here. That’s what makes an unsafe working environment, because anyone could “be next.” That’s what makes someone a predator: they are someone for whom behavior like this is standard operating procedure and cannot be trusted with others.

Could they eventually recognize the error of their ways? Make amends? Be rehabilitated? I believe that’s possible.

But the first step in solving a problem is admitting you have one. That’s the phase we’re in right now. Too many powerful men have yet to even acknowledge that they’ve engaged in problematic behavior, attempting to discredit the victims who come forward. Or when they do somewhat acknowledge the behavior, they give half-assed apologies where they say things like “I don’t remember that happening, but if I did it, I’m sorry.”

Sexual harassment and assault is endemic to many industries, the entertainment industry simply being the most visible. If we are going to keep these work environments safe, we need to treat every allegation as an indicator of a pattern of behavior. Incidents of harassment and assault are like cockroaches. Whenever you see one, it indicates hundreds more in the walls.