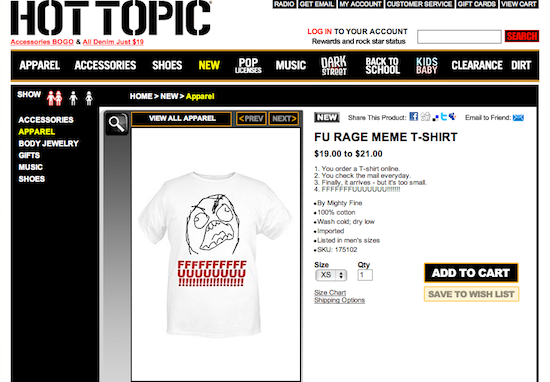 We’ve previously covered Hot Topic‘s Internet-enraging pilfering of the Rage Guy meme, which they sold in t-shirt form while managing to get many details very wrong. But that’s all over now. Following a devious 4chan campaign to get Hot Topic to pull the FFFFFFFUUUUUUUUU-spouting “FU Rage Meme T-Shirt” by associating it with racism, the clothing retailer has complied, and says it will stop selling the t-shirts.

Rage Guy is the character Hot Topic sells, see the original post from 1 year ago. The character focuses on interesting situations, check out the image gallery.

Race Guy is the newest iteration posted this afternoon, today (the character everyone is talking about).

Who created Race Guy? We don’t know. Who created Rage Guy? We don’t know. We sold the shirt because it is pop culture and the series was funny. Why not let our customers express they’re interest in meme’s? So now what? Well, Hot Topic is the last company to support racism. Hell, we support diversity and wear it proudly. Now that the character represents racism because of these unknown creators – we will no longer be selling it.

Update: Uh, what? Hot Topic has changed their mind and says says they’ll still carry the shirt. Disregard some of the below.

After many hours researched and many communities identifying this as a hoax, we’ve made the decision to continue carrying the “Rage Guy” t-shirt. It is NOT racist.

4chan’s “Race Guy” push was predictably offensive (warning: You may actually be offended if you click the link). That said, the language of 4chan’s disinfo campaign was pretty clever:

“Race Guy is a meme created by the hivemind of Hot Topic Store. Althouth appearing to be just Rage Guy, Race Guy has opened the door to widespread racism in teen culture. Recently, Hot Topic have come under scrutiny for selling shirts featuring Race Guy, yet continue to sell. 4chan’s very own /b/ have launched a combat campaign to provide mass awareness of the clear and present racism presented by Hot Topic.”

So: Chalk one up to the Internet for getting its way. As we previously wrote when Hot Topic first began selling the Rageguy, the threat here was “a broader trend of aspiring ‘edgy’ clothing makers raiding random Dramatica pages for ideas”; the negativity of the reaction this time around will most likely make the “FU Rage Meme” affair a cautionary tale in the ‘edgy’ clothing biz such that said meme-raiding doesn’t happen on a broad, commercial scale, at least for a little while.

That said, you’ve got to give some credit to Hot Topic for their handling of this. Their initial greenlighting of the t-shirt may have been a misstep, but they responded quickly, before the ‘Hot Topic is racist’ meme spread from the Internet to the cable news circuit, reasonably savvily, and in such a way that they’re likely getting hundreds of thousands if not millions of free eyeballs worth of publicity out of it. FFFFFFFUUUUUUUUUUUU-