Everything happens so much.

Did you guys watch the big Pronunciation Book reveal today? Because we for sure did not see this coming.

It’s been revealed that both Pronunciation Book and Horse_eBooks, the Twitter account that was originally presumed to be a surrealist spambot dumping text from eBooks into a Twitter feed, are both long running art projects (along with the Let’s Talk About Systems Tumblr, too). Originally created by  Jacob Bakkila, a creative director at Buzfeed, and Thomas Bender, the vice-president of product development at Howcast, these projects have now been woven into an Alternate Reality Game (ARG) by the Syndyne art collective.

The transcript of the above video is as follows:

It’s morning in cyberspace, and the systems are in love. A spambot in a channel. What would the parents think? Together again. It’s all just data in the net. But we’re just getting started.

There is a man named Dalton. Dalton is dangerous. He is rich, he is strong, and he is going to crash the stock market.

Sidewalks crack and streets go dark. 10,000 bankers shake and scream for Dalton’s pyramid. Where are the regulators? That’s where you come in.

I’ve been trying to tell you something for five years.

You’re in the elevator. You’re right on time — like a regulator should be. You are a beautiful system. This is the world we’re in, and this is what is happening. What’s that tune? Everyone is singing. You are first class. You are ready. And you are the regulator who will see the shining data in the stars of Bear Stearns Bravo. Bear Stearns Bravo.

Who is Dalton? We don’t know, but apparently they’ve been toying with this idea for a while:

Seriously, there’s a whole story that unravelled in the horse_eBooks tweets about Dalton and we all completely missed it.

The website linked in the video’s description, Bear Stearns Bravo, leads you to the beginning of what’s intended to be a Choose Your Own Adventure video-based game series about a (fictional?) futuristic Los Angeles. It’s not loading for us here for some ridiculous reason, but from what we can tell it’s very Phillip K. Dick and/or David Cronenberg inspired in its weirdness. 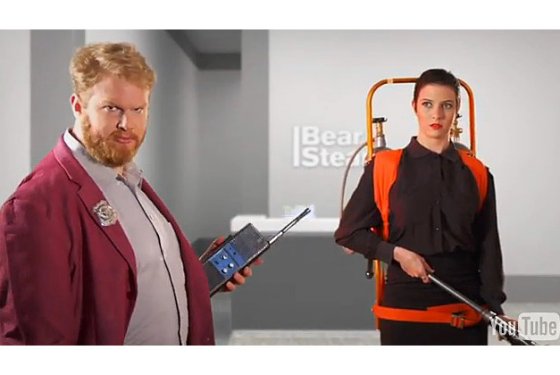 You can even sign up to join as a “regulator” or a “banker” to get access to the deeper parts of the game  — for $7, of course. Knew there’d be a catch.

At the bottom of the Bear Stearns Bravo website, there’s also an address and phone number:

That address is for the Fitzroy Gallery, where Bender and Bakkila will appear in a performance that ties the projects together. It’s apparently running from 10:00am to  9:00pm —  oh, hey, and it’s only a few blocks from our office! So we’ll try to see what we can do to get over there today. We don’t want you guys don’t miss out on this madness, after all. Be as bewildered as we are right now!

Seriously though? we have no idea what to make of any of this. Personally I kinda wish that it had really been about Battlestar Galactica all along, because that would have made more sense to my brain.

(via International Business Times and The New Yorker)