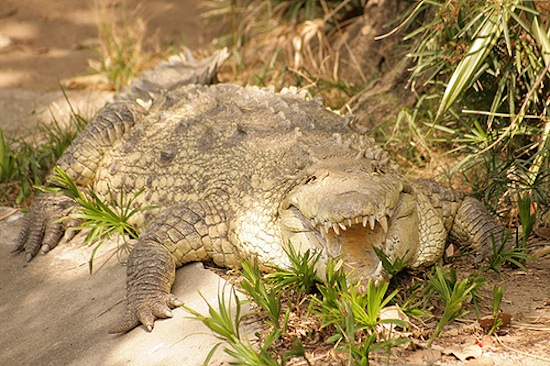 Customs agents in Hong Kong busted an ambitious smuggler carrying about $1 million worth of illicit cargo, including dried endangered seahorses and crocodile meat. Though it’s an abhorrent crime and we hope the folks behind it are locked up for a good long time, as poachers should be, we can’t help but grant the smugglers points for common sense. After all, if you’re going to try and smuggle a crocodile into a place, it’s really best to do so once someone more capable has already converted the creature into a series of steaks and fillets. Anything else just sounds exceptionally dangerous.

Bound for Chinese markets, pharmacies, and dinner tables, the crocodile meat and seahorses were among the most valuable items of a haul that also included dried deer and gecko tails, as well as bird’s nests. the crate was cleverly labelled “deer antlers,” but quick-thinking Hong Kong customs agents saw right through that ruse.

The crocodile meat — it’s not known what species exactly it’s from, but officials released a statement saying they believe it to be an endangered species — would have probably ended up fancy dinners, presumably in the interest of making sure that crocodiles know their place on the food chain and don’t get any big ideas about rising up and devouring us all. The dried seahorses, though — also endangered — would have been used for their supposed aphrodisiac qualities, which makes us doubly mad — if you’re going to be evil, fine, be evil. Don’t be stupid and evil, though. That’s very hard for the rest of us to even pretend to respect.

A quick note to the gentlemen who feel they need dried, endangered magic fish powder to be more attractive to the opposite sex — maybe try not being the sort of dude who helps to wipe out whole species buying magic-fish-powder love charms. We hold close to the idea that being that sort of person is well and thoroughly a turn off. Maybe like spring for an evening on the town and a real nice dinner instead. Just, y’know, stay away from the crocodile.