Crocodile’s Jaws Are Armor Plated, But Still As Sensitive As A Human Fingertip 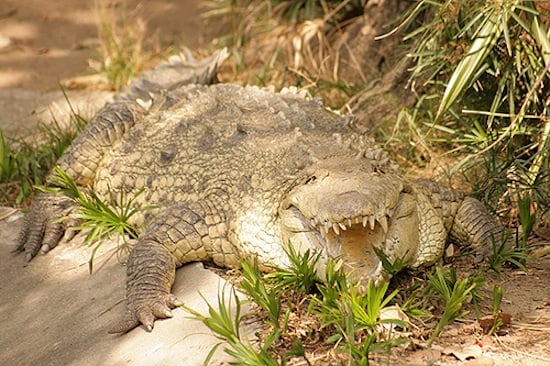 Crocodile researchers have discovered an unexpected organ associated with the famously toothsome and heavily armored reptile — one that makes the monstrous creature’s jaws one of the most sensitive body parts in the animal kingdom. Crocodile’s mouths are lined with tiny, dome-shaped structures that are packed with nerve endings, rendering the massive, powerful jaws as sensitive as human fingertips, says a study published today in the Journal of Experimental Biology.

The domes, known as “integumentary sensor organs” (ISOs), can be found all over the heavily armored bodies of crocodiles and alligators, but are heavily concentrated on the animals’ faces and jaws, rendering those areas particularly touch sensitive. Why crocodilians would evolve such sensitive faces and mouths is still not understood, but there are a couple of possibilities.

One theory holds that the increased sensitivity allows crocodiles a great range of feeling while they’re swimming underwater. That would allow them to tell debris from food at just a casual brush, saving them time and energy and allowing them to brush past a log without giving it a taste test — and thus giving away their position to prey in the area.

Another possibility is that crocodile jaws need to be as sensitive as they are strong to care for their young. Crocs are surprisingly attentive mothers, caring for and transporting hatchlings in their mouths. Having very touch sensitive jaws could explain mother crocodiles astounding ability to use the same jaws that can snap the femur of a water buffalo to act as a nursery for her babies. After all, gerbils aside, eating your own young is not generally what anyone would call a treasured evolutionary trait.