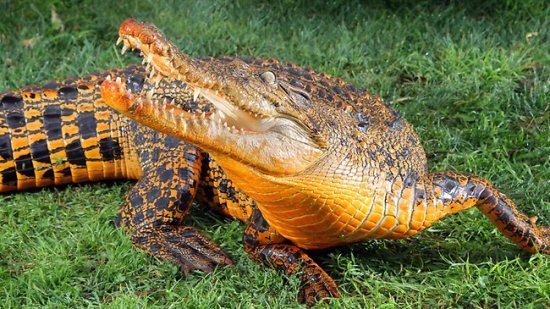 Snappy, an 8-foot-2-inch crocodile, turned orange. Not from eating a bunch of carrots and tomatoes like that one episode of Scrubs would have you believe, but because Snappy attacked a water filter at his enclosure at the Roaming Reptiles park in Australia. A few weeks after the attack, owner Tracey Sandstrom notice Snappy changed color. Sandstrom hasn’t noticed the color change affecting Snappy in any negative way, noting that Snappy still has a healthy appetite and is doing everything he always did prior to the filter attack.

Crocodile expert Graham Webb guessed that something in the water changed the croc’s color, iron, tannins from leaves, or red algae that oxidizes when it dries. Webb noted that the tongue was not colored, which lends credence to the theory that the color change came from oxidization when drying while Snappy basked in the sun, due to the tongue being unlikely to dry out from basking, whereas the skin would be. Though the bright orange look might be a sleek new style for the crocodile, he is expected to change back to his normal color at some point. Read on below to see another, somewhat terrifying picture of the orange crocodile.