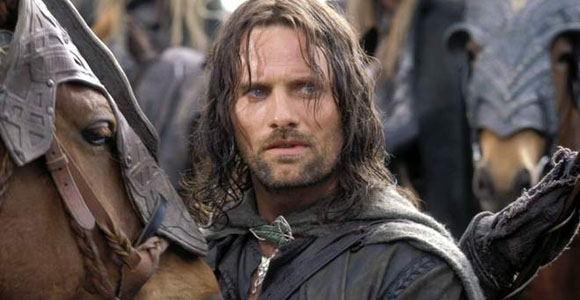 How do you forget about Viggo Mortensen? I know I sure can’t. But it seems that’s exactly what’s happened with the actor concerning Peter Jackson’s Hobbit films. Mortenson was originally asked by producers to reprise his role of Aragorn in the two-parter and then…nothing. What gives?

The actor recently did an interview with Movies.com about his role in the David Cronenberg directed A Dangerous Method, in which he plays Sigmund Freud, but inevitably the subject of The Hobbit arose.

At one point, the producers asked if I would do it and I said sure if Aragorn is supposed to be in the bridge story because he’s not in The Hobbit. I would rather do it than see someone else do it, but I’ve never been asked and they’re shooting the movie. I’m not in it unless it there is some last-minute plan they have, but I thought I would have heard of it by now. Orlando Bloom and Cate Blanchett shot something, but they’re elves and don’t change as rapidly. As you know, Aragorn is half elf and also lives a couple hundred years or more and he could be in a bridge, but I have to assume it isn’t going to happen. That was an important period in my life and I will always be grateful that the trilogy was so successful and gave me a lot of new opportunities. I never would have gotten A History of Violence, no matter how much David wanted me, had it not been for my newfound notoriety.

Pardon me a moment while I sob not-so-silently. Several actors from The Lord of the Rings are back for The Hobbit even though they aren’t in the original book by J.R.R. Tolkien. At first I was extremely unsure about that decision but after hearing how they would be used I felt ok with it. So why leave out Aragorn after you initially planned to use him and furthermore, wouldn’t it be polite to tell the actor it wasn’t happening?

Movies.com mentioned that Aragorn was the only character Mortensen has played more than once on screen and asked if he would do it for any other role. “Well, there is one that might happen, actually. David has talked about a sequel to Eastern Promises. That’s a good character and there is more to be said if one wanted to do it. Normally sequels don’t turn out as good as the original except for something like The Godfather: Part II, but Cronenberg could do it if anyone could.”

What are your thoughts about Mortensen’s return, or lack thereof, to Middle Earth?