What would Middle-earth insurance companies pay after the events of The Hobbit? 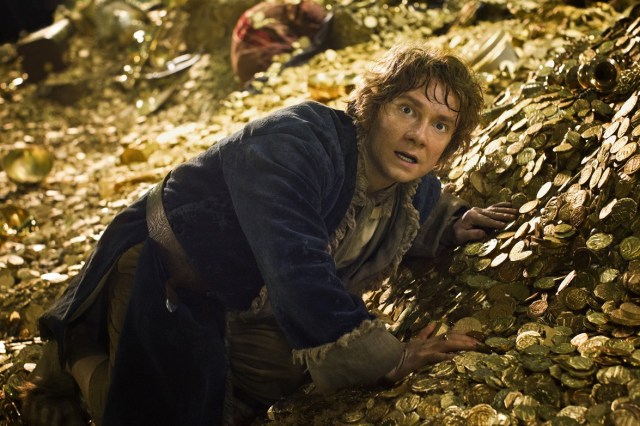 It takes a special kind of geek to look at The Hobbit and think, “I wonder what the insurance claims from this story would add up to be.” Thankfully, Dr. Nils Möckelmann and Andreas Hufgard are precisely that kind of geek. They ran the numbers and figured out how much insurance money Hobbit characters have coming to them.

We’ll focus on how Möckelmann and Hufgard did this, because we feel like trying to figure out why they did this would be a journey into madness. The pair broke down the story in a series of events where one could expect an insurance settlement. There is no shortage of these events, so we hope Bilbo is current on his policy.

When Azog loses his hand, he’s due compensation for pain and suffering, lost wages, and treatment. Möckelmann and Hufgard assume he makes a salary of 100 euros per day, which I guess seems like a fair price for a one-handed orc hell-bent on revenge. They also assume that Azog doesn’t need that much compensation because of his “exceptional constitution.” This is supported by the fact that it appears he only missed two days of work after losing his hand.

Azog is a total badass, and he can expect a 5,700 euro payout from Thorin.

100 orcs are injured or killed, and Möckelmann and Hufgard estimate a lump pain and suffering damage of 5,000 euros per orc, with an additional 1,000 euros per orc for either treatment or funeral expenses. Each of the estimated 30 surviving orcs is paid 100 euros. That adds up to 603,000 euros.

The most expensive payout would actually be made to the Warg Riders. Wargs ain’t cheap, and Möckelmann and Hufgard put an estimated value of 100,000 euros on each one of the endangered giant wolves. When 25 of them end up stabbed, injured, or dead their riders who are the presumed owners can expect to split a 2,500,000 euro payout.

On the opposite end of the spectrum, when three trolls get turned to stone there is zero payout, because there’s no one to claim it, and no funeral expenses are required since a stone troll essentially is its own gravestone. You’d also expect there to be some payable damages when five stone giants attack each other and break one another up into thousands of pieces, but it’s considered an act of nature.

All in all, Middle-earth insurance companies can expect to shell out 3,108,700 euros after The Hobbit.

(via Allianz, image via The Hobbit: The Desolation of Smaug)