We look at a lot of pop culture mashups here, but there’s just something about the mashups of illustrator Hillary White, probably because they show a clear knowledge of art history and technique.

And then they use that knowledge to put Muppets, Star Wars, Voltron, and Silent Hill characters and more in famous paintings, like Domenichino’s The Maiden and the Unicorn.

Scheffer’s The Temptation of Christ is recast with Robin; while Batman plays the role of Satan. 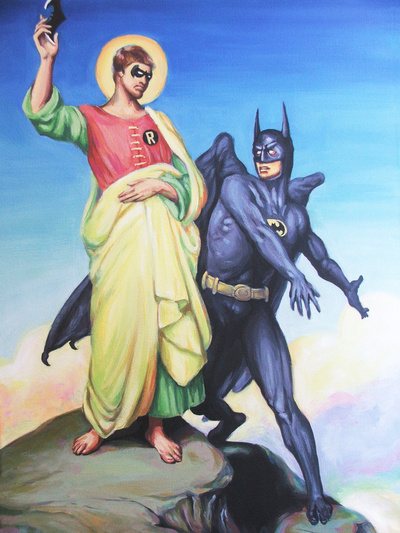 After some strenuous googling, I’m afraid there’s just far too much art of the Virgin Mary in existence, and so I was unable to place this one.

Same goes for this painting of Baron Pyramid Head.

But this is Artemisia Gentileschi’s Judith Slaying Holofernes (okay, Beaker Slaying Honeydew). Gentileschi was one of the only famous female painters of her time, whose story could be a post in its own right.

Van Gogh’s Café Terrace at Night gets a sinister visitor (but maybe he’s just there for a coffee?) in Nightmare at Café Terrace.

Pennywise shows up where no one wants him, in Wyeth’s Christina’s World.