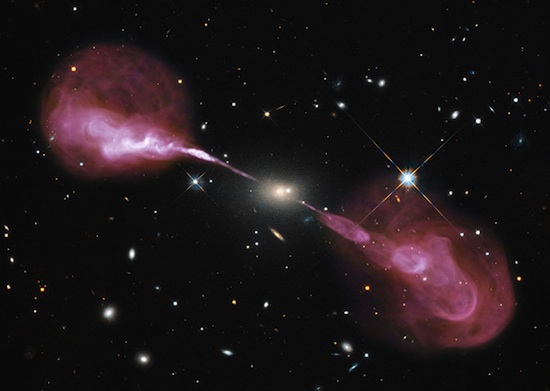 Galaxies are a lot like people — some are notable for their shape, or their age, or their brightness, but others you can only notice how very, very loud they are. These radio galaxies emit vast quantities of energy on radio wavelengths, and Hercules A is among the loudest we know of, with the supermassive black hole at it’s center putting out about a billion times more energy along radio wavelengths than the Sun. Now, courtesy of a collaboration between the Hubble Space Telescope and the Very Large Array (VLA) radio telescope,  we can visualize what all that energy would look like and, well, it’s pretty serious stuff. For a look at how the visualization took shape, you can check out the video below.

Looking through a conventional space telescope like the Hubble, there’s not much that’s very impressive about Hercules A. It’s large — about 1,000 times bigger than our own Milky Way — but beyond that, there’s little to distinguish it from the myriad other galaxies spied by Hubble. Get a glance at the galaxy through a radio telescope, though, and it’s a very different story. When you listen, rather than look, Hercules A is suddenly very hard to miss.

One of the radio brightest objects seen outside of our galaxy, the energy from Hercules A is emitted as these twin plumes, which stretch about a one and a half million light years from end to end. The energy — including magnetic fields, beams of plasma, and charged subatomic particles — isn’t visible to the naked eye, but this new visualization blends imagery from visual and radio signals to give us an idea of how really impressive the power being release by Hercules A is.

This latest image isn’t even the whole story, though. The inner cores of both jets move too fast to be captured and visualized, and the entire galaxy is surrounded by a superheated gas cloud that pours out x-rays, meaning that as badass as Hercules A looks right now, it is actually even more so.

(via NASA, image via NASA/ESA)