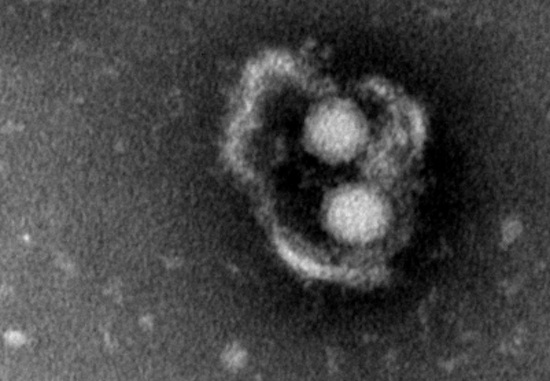 If there is one thing science teaches us, it’s that everything horrible is way more horrible once you understand it better. Today’s latest case in point: Hepatitis A, a chronic disease that rots away the human liver, has been found to demonstrate an unexpected adaptation that makes it even more horrible. Once it has invaded a host, the virus cloaks itself in the lipid membrane from infected liver cells to hide from the immune system, marking the first time a virus has been found to use a Buffalo Bill-style skin suit as a means of stealth.

Years of medical research has led doctors to believe that viruses come in two varieties — those in envelopes, and those not in envelopes. A study published recently in the journal Nature shows that the hepatitis A, though, straddles that line, beginning without an envelope, but acquiring one when it infects a host. The virus gets its envelope in a rather unseemly fashion, hijacking the membrane of cells it grows in and using that membrane as its own envelope, a process we can only assume is accompanied by the virus loudly berating the cell to put on lotion, lest it get the hose again. That envelope lets it pass out of the cell and remain undetected — and thus unmolested — by antibodies out to destroy it.

University of North Carolina professor Stanley Lemon, who led the study, said this of the virus’ impressive identity theft tactics:

“What hepatitis A virus has done, and we don’t totally understand how it has accomplished this, is to have the advantage of existing as a virus with no envelope and being very stable in the environment so it can be transmitted efficiently between people, but to wrap itself in a membrane to evade neutralizing antibodies and facilitate its spread within the host once it has infected a person.”

Lemon also speculated that while hepatitis A is the first virus to demonstrate this trick, it won’t be the last, suggesting that the ability to steal skin from a dying cell and use it as camouflage may be more common than we think — or at least more common than we’re comfortable with.

The study also raises some serious questions about the nature of the hepatitis A vaccine. Researchers and clinicians have long thought that the hepatitis A vaccine — which is one of the most effective vaccines ever developed — worked by recruiting antibodies to destroy cells infected by the disease. Since the virus is cloaked, though, that can’t be the way the vaccine works, meaning researchers have to go back to the drawing board to get a better handle on why it does its job so well. While it may sound disheartening, that’s actually good news, as it could teach scientists new things they never expected about how viruses spread, and how to to stop them.