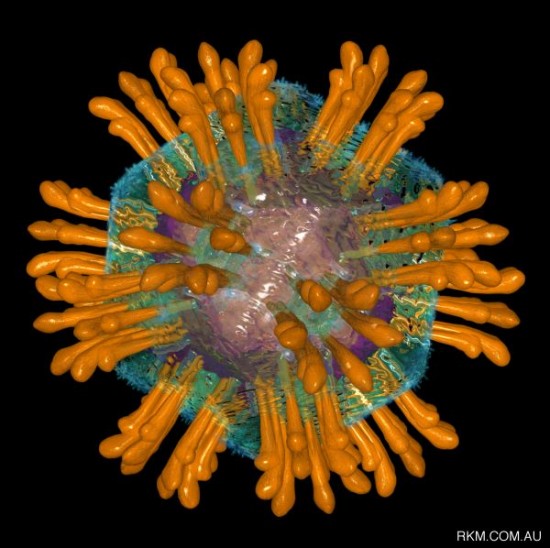 University of Florida researchers led by Y. Charles Cao and Dr. Chen Liu have developed an artificial nanoparticle complex that was able to reduce hepatitis C virus (HCV) levels in cultured cells and mice by more than 99%. The research team have endearingly called it a nanozyme, so we shall do the same. It’s special because it triggers no negative side effects and works like a spy-sniper superthing.

Current treatments for hepatitis C use drugs that intervene with the HCV replication machinery. These are typically only 50% successful in helping patients, and have side effects — including flu-like symptoms, anemia, and anxiety — that vary from drug to drug. The research team designed the nanozyme to work on a similar principle, interfering with the HCV genetic material, but with a higher success rate and reduced side effects.

The nanozyme has a backbone of tiny gold particles with two main biological components on the surface. The first component is an enzyme that snipes the mRNA that contains the chemical blueprint of the virus. The second component is a DNA oligonucleotide that identifies the target and relays the information to the enzyme. Like I said: Spy-sniper superthing.

The report notes that it, “is less susceptible to degradation by proteinase activity, can be effectively taken up by cultured human hepatoma cells, is nontoxic to the cultured cells and a xenotransplantation mouse model under the conditions studied, and does not trigger detectable cellular interferon response” and managed to decrease HCV level in cultured cells and mice by more than 99%.

Of course, the research is nowhere near complete, and the product may never see medical application, but it’s always good to know there’s lots of work being done trying to keep the human race alive and disease-free so that we don’t die out before Half Life 3 is released.