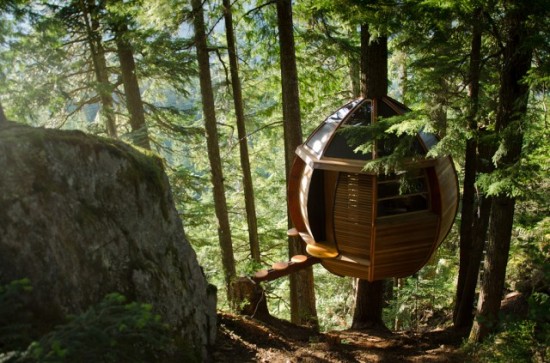 It’s a classic story: Boy becomes successful software engineer, boy retires. But this story about Joel Allen goes on, because instead of reclining into his early golden years, he ran out of cash and decided to take up carpentry. One thing led to another, and Allen built an egg-shaped house on Canadian government land near Whistler, British Columbia. Now, after keeping it secret for so long, he’s trying to figure out how to save the place he calls the Hemloft.

Named for the tall hemlock tree on which it’s build, the Hemloft was constructed without electricity and in a relative seclusion. Incredibly, this was Allen’s first major carpentry project. The house is multi-floored, with open skylights and windows, an outdoor deck area with grill, and apparently some kind of space for sleeping — though where is a bit of a mystery.

Allen has recently decided to share his secret home with the world, in part, it seems, because its future is so uncertain. Because it is on so-called “crown land,” Allen has no actual claim to the home itself, which means anyone could come along and destroy or vandalize it. He’s asking for help from the Internet, so far only posting a poll asking the general public what he should do.

At the moment, the leading answer, by far, is to buy the nine square feet of land the Hemloft occupies. Whether or not that comes to pass is yet to be seen, but hopefully something so cool won’t end up as kindling.

(The Hemloft via Laughing Squid, The Hairpin)