This Just In: Hello Kitty Is Not a Cat

Nothing is real anymore. 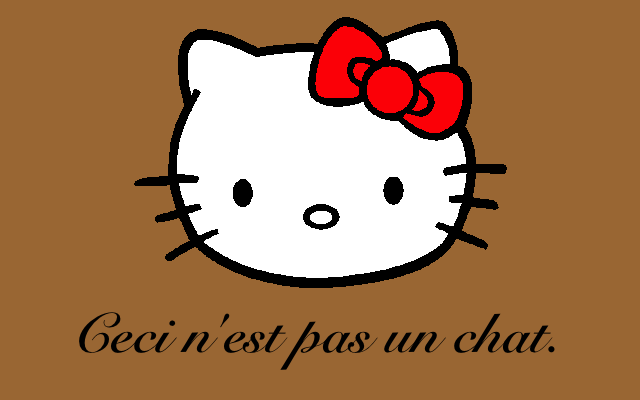 Up is down! Black is white! Cats are… well, they’re not dogs, but they definitely aren’t cats either, apparently.

This year marks the fortieth anniversary of the character Hello Kitty, who was first created by Sanrio in 1974 and came to the United States two years later. To mark the occasion, the world’s first ever Hello Kitty Con will be held in the Museum of Contemporary Art at Downtown LA’s Little Tokyo district; the Japanese American National Museum will also be holding a retrospective exhibit in mid October full of Hello Kitty themed art and merchandise.

But according to University of Hawaii Anthropolgist Christine R. Yano, who wrote a book last year about the adorable cartoon creature (Pink Globalization: Hello Kitty’s Trek Across the Pacific), we’re all getting something wrong when we talk about Hello Kitty; namely, that she is a cat. She’s not. She is a girl.

You read that right. When Yano was preparing her written texts for the exhibit at the Japanese American National Museum, she says she described Hello Kitty as a cat. “I was corrected — very firmly,” she says. “That’s one correction Sanrio made for my script for the show. Hello Kitty is not a cat. She’s a cartoon character. She is a little girl. She is a friend. But she is not a cat. She’s never depicted on all fours. She walks and sits like a two-legged creature. She does have a pet cat of her own, however, and it’s called Charmmy Kitty.”

Even weirder? Despite her synonymous association with modern Japanese pop culture and fashion, she’s also British. Her official character bio lists her full name as Kitty White, and she lives in London with her parents, George and Martha, as well as her twin sister Mimmy.

Yano explains that when Sanrio first created Kitty in the ’70s, Japanese culture at the time “loved the idea of Britain. It represented the quintessential idealized childhood, almost like a white picket fence. So the biography was created exactly for the tastes of that time.”

Great, everything we know is a lie. Someone better go tell Avril Lavigne she made even more of a fool of herself last year than we all thought.